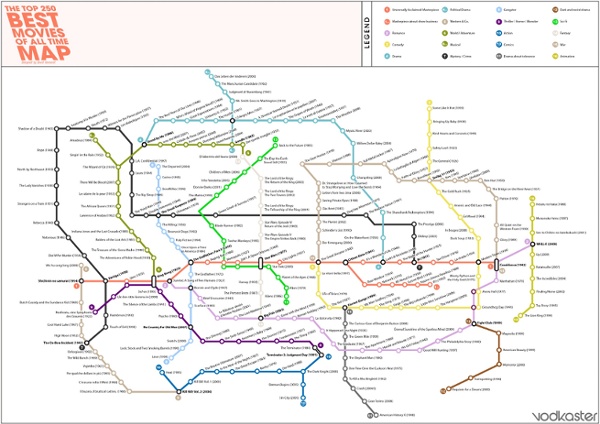 Top Ten Films 1930-2009 2019 1. LEAVING NEVERLAND (Dan Reed) 2. APOLLO 11 (Todd Douglas Miller) 3. THE BEACH BUM (Harmony Korine) 4. BAIT (Mark Jenkin) 5. Is College Really Worth It? Is going to college really worth it? Probably so, but it's not that clear cut, and economics have been arguing the point for 30 years. Most studies tend to show that college-educated people end up making far more money in the course of their lifetimes. (The niggle: Usually, it's not worth paying for a private university.) Still, that evidence isn't totally cut and dry: What do you really learn in college?

The greatest films of all time: download the data, as a spreadsheet Greatest films of all time: Psycho Photograph: Allstar/Cinetext/ The Guardian/Observer greatest films of all time are being revealed and you can follow the whole lot here. Each day, our top 25 movies will be released, and each day here on the Datablog we will add them to our and the sortable table below. Today is the horror 25. We're led by Alfred Hitchcock's Psycho. What films would you add to the list? How to Detect Lies - body language, reactions, speech patterns Interesting Info -> Lying Index -> How to Detect Lies Become a Human Lie Detector (Part 1) Warning: sometimes ignorance is bliss. After gaining this knowledge, you may be hurt when it is obvious that someone is lying to you. The following deception detection techniques are used by police, forensic psychologists, security experts and other investigators.

What makes sushi great? - Chefs and Cooks A friend of mine once met a delegation of revered Japanese chefs. There was a wizened gentleman among them who was clearly the leader. He spoke little, but the other star chefs deferred to him, paid him obvious respect. My friend finally asked, quietly, “So, what does the old guy do?” 50 Best Movies of 2010 Much has been debated about the quality of the top movies released this year, but that we were able to pull together a list of the 50 best movies of 2010 means it couldn't have been so bad after all. After the jump, we count down our favorite movies of the year, from the mind-bending 'Inception' to the movie that may have defined our generation, 'The Social Network.' Think you can figure out which movie topped our list? There's only one way to find out. - the Moviefone Editors, Dec. 21, 2010

Top 100 Tuesday: 100 Best Movies of the Decade EmailEmail Since we first published our 100 Best Movies of the Decade in 2009, films have continued to get bigger and better. Here’s an update to the original list. Here’s what we originally wrote five years ago. The Black Blood of the Earth (read below first the beginnings of where BBotE came from) Or skip my blather and go look at the goods! At some point, all of us start wondering how much coffee we can drink before our hearts explode. This typically happens when we are up, very late, in college with either the panic of a final the next day or have nothing particularly better to do than try to achieve acute caffiene poisoning. What do you mean you haven’t done this?

Top 10 underappreciated kids movies from the last 20 years Before we get started, one note: I do appreciate that some films on this list earned a lot of critical acclaim, or pulled in a reasonable amount of cash. The point, though, is that these are the films that have been seemingly forgotten about. And that's a fate they simply don't deserve.

China vs United States As we discussed in yesterday’s post, whether the United States and China like it or not, the economic futures of both countries are intertwined. Everyone knows that China’s got more people and that its importance as an economic superpower has escalated in recent years. What you might not understand is how the differences between our countries, in economic philosophy, in population, in geography and in how the military is built and paid for ultimately play into the entire economic relationship. For many China remains something of a mystery. In order to help compare and contrast the economic differences, we have simplified the data from the CIA World Factbook. For the exact numbers in any category, check here. The 50 Best Movies of the Decade (2000-2009) If comparing music from Gillian Welch and Outkast in our 50 Best Albums of the Decade is like apples and oranges, ranking films like Amélie, The Dark Knight and Mulholland Drive is more like apples, ice cream and foie gras. But despite the wild variety among our 50 Best Movies from 2000-2009, each is an exquisitely made, exceptionally satisfying piece of cinema that we believe will endure well after the decade has ended. There are masters like Martin Scorcese and Lars Von Trier, and relative newcomers like Fernando Meirelles and Anna Boden. There are documentaries, comedies and dramas, as well as animated films and even a super-hero flick. Mirroring a decade of globalism, the filmmakers are from the United States, New Zealand, Taiwan, Germany, Ireland, France, Japan, Canada, Mexico, Denmark, Romania, Thailand, Brazil, and nearly every part of the U.K. Let these be our recommendations for your Netflix queue—or in the case of #21, a theater near you.