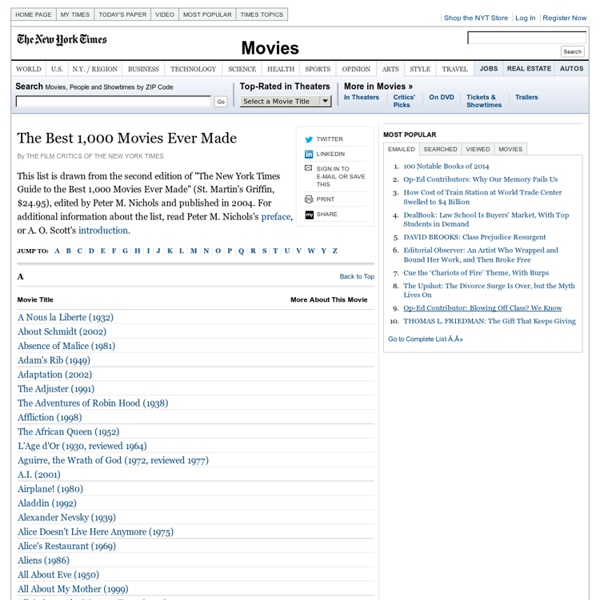 Blade Runner Blade Runner is a 1982 American neo-noir dystopian science fiction film directed by Ridley Scott and starring Harrison Ford, Rutger Hauer, Sean Young, and Edward James Olmos. The screenplay, written by Hampton Fancher and David Peoples, is a modified film adaptation of the 1968 novel Do Androids Dream of Electric Sheep? by Philip K. Dick. Empire's 500 Greatest Movies Of All Time 10,000 Empire readers, 150 of Hollywood's finest and 50 key film critics voted in the most ambitious movie poll evert attempted. 500. Ocean's Eleven (2001) ALL-TIME 100 Movies - TIME You like us, you really like us. You also hate us. Anyway, you click on us, which is the surest way a website has of measuring interest in its content. The All-TIME 100 Movies feature—compiled by Richard Schickel and me, and handsomely packaged by Josh Macht, Mark Coatney and all the smart folks at TIME.com—attracted a record-busting 7.8 million page views in its first week, including 3.5 million on May 23rd, its opening daym, in time for Father’s Day. Thousands of readers have written in to cheer or challenge our selections, and thousands more have voted for their own favorites. The response simply underscores Richard’s and my long-held belief that everybody has two jobs: his own and movie critic.

Gandhi (film) Gandhi is a 1982 epic biographical film which dramatises the life of Mohandas Karamchand Gandhi, the leader of India's non-violent, non-cooperative independence movement against the United Kingdom's rule of the country during the 20th century. Gandhi was a collaboration of British and Indian production companies[3] and was written by John Briley and produced and directed by Richard Attenborough. It stars Ben Kingsley in the titular role. The film covers Gandhi's life from a defining moment in 1893, as he is thrown off a South African train for being in a whites-only compartment, and concludes with his assassination and funeral in 1948. Although a practising Hindu, Gandhi's embracing of other faiths, particularly Christianity and Islam, is also depicted. Gandhi was released in India on 30 November 1982, in the United Kingdom on 3 December 1982, and in the United States on 6 December 1982.

The 50 Greatest Cult Movies of All Time It’s midnight somewhere. “Cult movie” is a hard thing to pin down. For the purposes of this list — celebrating the tenth anniversary of Donnie Darko — we’ve put a premium on the intensity and selectiveness of a movie’s appeal. We’ve also limited each director to one film. See you at midnight! Babylon A.D. Babylon A.D. is a 2008 French American science fiction action film based on the novel Babylon Babies by Maurice Georges Dantec. The film was directed by Mathieu Kassovitz and stars Vin Diesel. It was released on 29 August 2008 in the United States. Plot[edit] In 2058, a mercenary named Toorop (Vin Diesel) accepts a contract from a Russian mobster, Gorsky (Gérard Depardieu), who instructs him to bring a young woman known only as Aurora (Mélanie Thierry) to New York City. In order to reach this goal, Gorsky gives Toorop a variety of weapons as well as a UN passport that has to be injected under the skin of the neck.

The best films of the '00s The scene was not unlike 12 Angry Men (or, in this case, 3 Shlubby Men, 1 Exasperated Woman, And A Dude On Speaker Phone From Arkansas): Armed with lists of their favorite movies of the decade, the five core A.V. Club film writers spent days sequestered in a stuffy, un-air-conditioned room—okay, it was actually just a few hours, and we were comfortable—in an effort to forge consensus on the Top 50 films of the ’00s. The result: A ranked list that is in no way arbitrary and will serve as the canonical standard for decades to come. You’re welcome. 50. Oldboy (2003) Top 50 Dystopian Movies of All Time Massive dehumanization, totalitarian government, rampant disease, post-apocalyptic terrains, cyber-genetic technologies, societal chaos and widespread urban violence are some of the common themes in dystopian films which bravely examine the ominous shadow cast by future. A dystopia is a fictional society that is the antithesis or complete opposite of a utopia, an ideal world with a perfect social, political and technological infrastructure. A world without chaos, strife or hunger.

ALL Time 100 Movies You like us, you really like us. You also hate us. Anyway, you click on us, which is the surest way a website has of measuring interest in its content. The All-TIME 100 Movies feature—compiled by Richard Schickel and me, and handsomely packaged by Josh Macht, Mark Coatney and all the smart folks at TIME.com—attracted a record-busting 7.8 million page views in its first week, including 3.5 million on May 23rd, its opening daym, in time for Father’s Day. Thousands of readers have written in to cheer or challenge our selections, and thousands more have voted for their own favorites. Starship Troopers (film) Starship Troopers is a 1997 American military science fiction action film directed by Paul Verhoeven and written by Edward Neumeier, originally from an unrelated script called Bug Hunt at Outpost Nine,[2] but eventually licensing the name Starship Troopers, from a science fiction novel by Robert A. Heinlein. It is the only theatrically released film in the Starship Troopers franchise. The film had a budget estimated around $105 million and grossed over $121 million worldwide. Starship Troopers was nominated for the Academy Award for Best Visual Effects at the 70th Academy Awards in 1998.

Martin Scorsese's Film School: The 85 Films You Need To See To Know Anything About Film Interviewing Martin Scorsese is like taking a master class in film. Fast Company’s four-hour interview with the director for the December-January cover story was ostensibly about his career, and how he had been able to stay so creative through years of battling studios. But the Hugo director punctuated everything he said with references to movies: 85 of them, in fact, all listed below. Pay it forward Pay it forward is an expression for describing the beneficiary of a good deed repaying it to others instead of to the original benefactor. The concept is old, but the phrase may have been coined by Lily Hardy Hammond in her 1916 book In the Garden of Delight.[1] "Pay it forward" is implemented in contract law of loans in the concept of third party beneficiaries. Specifically, the creditor offers the debtor the option of paying the debt forward by lending it to a third person instead of paying it back to the original creditor. This contract may include the provision that the debtor may repay the debt in kind, lending the same amount to a similarly disadvantaged party once they have the means, and under the same conditions.

The Top 50 Greatest Films of All Time from our September 2012 issue Introduction Ian Christie rings in the changes in our biggest-ever poll. The 50 Most Genuinely Creepy Horror Movies They rely on atmosphere and suspense rather than gore and jump-scares. Here’s our pick of the 50 most genuinely creepy horror movies… Creepy isn’t the same as scary. Films can be scary simply by using loud noises and sudden movements to make their audiences jump; they can play on primal fears and physical reactions to give you a thrill. But creepy is harder to pull off. To be effectively creepy, a film needs to establish a certain atmosphere; it needs to draw you in and make you care.