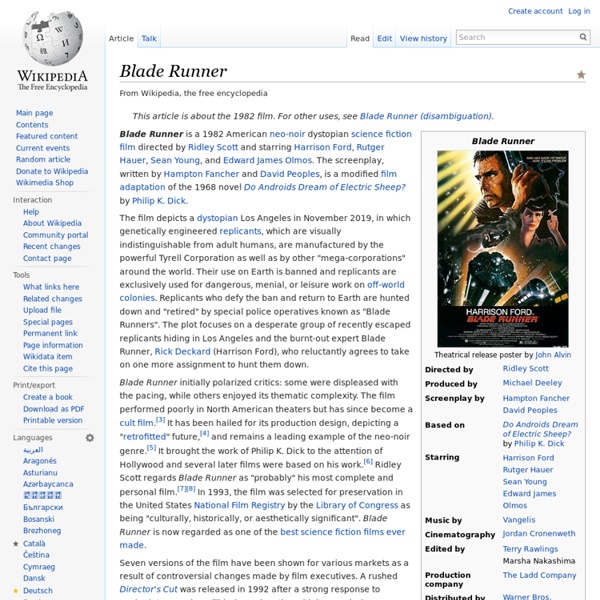 Blade Runner is a 1982 American neo-noir dystopian science fiction film directed by Ridley Scott and starring Harrison Ford, Rutger Hauer, Sean Young, and Edward James Olmos. The screenplay, written by Hampton Fancher and David Peoples, is a modified film adaptation of the 1968 novel Do Androids Dream of Electric Sheep? by Philip K. Dick. The film depicts a dystopian Los Angeles in November 2019, in which genetically engineered replicants, which are visually indistinguishable from adult humans, are manufactured by the powerful Tyrell Corporation as well as by other "mega-corporations" around the world. Blade Runner initially polarized critics: some were displeased with the pacing, while others enjoyed its thematic complexity. Seven versions of the film have been shown for various markets as a result of controversial changes made by film executives. Plot[edit] Deckard begins his investigation at the Tyrell Corporation to ensure that the test works on Nexus-6 models. Themes[edit]

Lostpedia - The Lost Encyclopedia Film noir Film noir (/fɪlm nwɑr/; French pronunciation: ​[film nwaʁ]) is a cinematic term used primarily to describe stylish Hollywood crime dramas, particularly those that emphasize cynical attitudes and sexual motivations. Hollywood's classical film noir period is generally regarded as extending from the early 1940s to the late 1950s. Film noir of this era is associated with a low-key black-and-white visual style that has roots in German Expressionist cinematography. Many of the prototypical stories and much of the attitude of classic noir derive from the hardboiled school of crime fiction that emerged in the United States during the Great Depression. The term film noir, French for "dark film",[1] first applied to Hollywood films by French critic Nino Frank in 1946, was unrecognized by most American film industry professionals of that era.[2] Cinema historians and critics defined the category retrospectively. Problems of definition[edit] Background[edit] Cinematic sources[edit]

29 Incredibly Useful Websites You Wish You Knew Earlier There are so many wonderful websites around, and it is difficult to know each and every one of them. The below list provides some of those websites that I find particularly helpful, even though they are not as famous or as prevalent as some of the big names out there. 1. BugMeNot Are you bugged constantly to sign up for websites, even though you do not wish to share your email? If yes, then BugMeNot is for you. 2. This nifty little website tracks whether the emails sent by you were opened and read by the receiver. If you are on a constant lookout of free full length movies, then Zero Dollar movies provides a collection of over 15,000 movies in multiple languages that are available to watch for free on Youtube. 4. Livestream allows you to watch and broadcast events live to viewers on any platform. scr.im converts your email address into a short custom URLs, that can be shared on public websites. 6. 7. Fax Zero allows you to send faxes to US and Canada for free. 8. 9. 10. 11. 12. 13. 14.

Immortal Game Game animation General description[edit] Checkmate of the Immortal Game Adolf Anderssen was one of the strongest players of his time, and many consider him to have been the world's strongest player after his victory in the London 1851 chess tournament. Lionel Kieseritzky lived in France much of his life, where he gave chess lessons, and played games for five francs an hour at the Café de la Régence in Paris. Played between the two great players at the Simpson's-in-the-Strand Divan in London, the Immortal Game was an informal one, played during a break in a formal tournament. This game is acclaimed as an excellent demonstration of the style of chess play in the 19th century, where rapid development and attack were considered the most effective way to win, where many gambits and counter-gambits were offered (and not accepting them would be considered slightly ungentlemanly), and where material was often held in contempt. Annotated game[edit] 1. e4 e5 2. f4 2... exf4 3. Position after 4...b5?!

How to Search Google Like a Pro: 11 Tricks You Have to Know Google is a powerful tool, but you’re missing out on a lot of that power if you just type words into it. Master Google and find the best results faster with these search tricks. Whether you’re an inexperienced user or a seasoned professional, you’ll probably find at least one search operator you weren’t aware of here. Many of Google’s search operators aren’t very well-known. Exact Words and Phrases One of the most basic and widely known search tricks is using quotation marks to search for an exact phrase. “Hello World” This same method now works for exact-word queries. “mining” Excluding a Word The minus sign allows you to specify words that shouldn’t appear in your results. linux distributions -ubuntu Site Search The site: operator allows you to perform a search in a specific site. site:howtogeek.com windows 7 You can also use the site: operator to specify a domain. Related Words ~geek Apparently, “Linux” is the most similar word to geek, followed by “Greek.” The Wildcard Time Ranges File Type

Themes in Blade Runner Despite the initial appearance of an action film, Blade Runner operates on an unusually rich number of dramatic levels.[1] As with much of the cyberpunk genre, it owes a large debt to film noir, containing and exploring such conventions as the femme fatale, a Chandleresque first-person narration in the Theatrical Version, and the questionable moral outlook of the hero — extended here to include even the literal humanity of the hero, as well as the usual dark and shadowy cinematography. Eye reflecting the "Hades" landscape. It is one of the most literate science fiction films[who?], both thematically — enfolding the moral philosophy and philosophy of mind implications of the increasing human mastery of genetic engineering, within the context of classical Greek drama and its notions of hubris[2] — and linguistically, drawing on the poetry of William Blake and the Bible. This is a theme subtly reiterated by the chess game between J.F. Genetic engineering and cloning[edit]

Evergreen Game Game animation The Evergreen Game is a famous chess game played in Berlin in 1852 between Adolf Anderssen and Jean Dufresne. Adolf Anderssen was one of the strongest players of his time, and was considered by many to be the world champion after winning the London 1851 tournament. Jean Dufresne, a popular author of chess books, was considered a master of lesser but still considerable skill.[1] This was an informal game, like the Immortal Game. Wilhelm Steinitz later described the game as the "evergreen in Anderssen's laurel wreath", thus giving this game its name. The German word Immergrün (Evergreen), used by Steinitz, refers to a specific evergreen plant, called Periwinkle (Vinca) in English. The game[edit] Position after 7...d3 White: Anderssen Black: Dufresne Opening: Evans Gambit (ECO C52) 1. e4 e5 2. The Evans Gambit, a popular opening in the 19th century and still seen occasionally today. 4... This is not considered the best response, although it was popular at the time. 8. 8... 10.

Free photos, PowerPoint presentations and brochure templates for churches Pantheism Pantheism is the belief that the universe (or nature as the totality of everything) is identical with divinity,[1] or that everything composes an all-encompassing, immanent God.[2] Pantheists thus do not believe in a distinct personal or anthropomorphic god.[3] Some Eastern religions are considered to be pantheistically inclined. Definitions[edit] Pantheism is derived from the Greek roots pan (meaning "all") and theos (meaning "God"). There are a variety of definitions of pantheism. Some consider it a theological and philosophical position concerning God.[4]:p.8 As a religious position, some describe pantheism as the polar opposite of atheism.[5] From this standpoint, pantheism is the view that everything is part of an all-encompassing, immanent God.[2] All forms of reality may then be considered either modes of that Being, or identical with it.[7] Others hold that pantheism is a non-religious philosophical position. History[edit] Recent developments[edit] "Mr. Categorizations[edit]