Top 50 Dystopian Movies of All Time 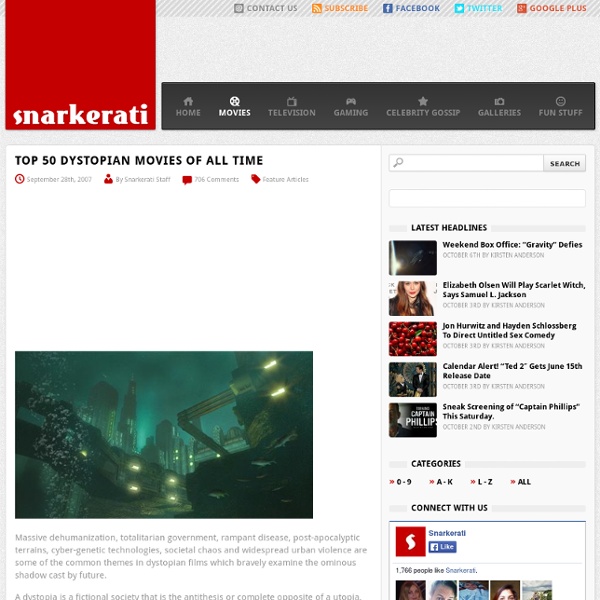 Massive dehumanization, totalitarian government, rampant disease, post-apocalyptic terrains, cyber-genetic technologies, societal chaos and widespread urban violence are some of the common themes in dystopian films which bravely examine the ominous shadow cast by future. A dystopia is a fictional society that is the antithesis or complete opposite of a utopia, an ideal world with a perfect social, political and technological infrastructure. A world without chaos, strife or hunger. A world where the individual potential and freedom is celebrated and brought to the forefront. In contrast, the dystopian world is undesirable with poverty and unequal domination by specific individuals over others. Dystopian films often construct a fictional universe and set it in a background which features scenarios such as dehumanizing technological advancements, man-made disasters or class-based revolutions. Ranking the List 50. In the nation of Libria, there is always peace among men. 49. 48. 47. 46. 45.

Existential & Psychological Movie Recommendations Film, as with many of the arts, often reflects many existential themes. This page, which was developed following several request for such a list, offers suggestions of movies which reflect existential and psychological themes. The information about the movies is brief to not give away anything which would impact the enjoyment of the movie. See also What is an Existential Movie? Other Movie Pages: Postmodernism & the Movies | Diversity Issues & the Movies | Psychology & the Movies Resources 16 Strangest Movies Everyone Should See There are movies you see, and then there are movies you experience. This list compiles 16 of the strangest movies that must be seen to be believed. They break all the rules to surprise us, challenge us, and give us one-of-a-kind cinematic experience. If you are bored of watching those Hollywood cliches, this list of 16 strangest foreign movies is what you need for a change.

How to Create Your First Web Page Note: If you know anything at all about HTML and CSS, don’t bother reading this, it’s a guide for the uninitiated, technophobes, luddites, computer-illiterates, anyone who is more comfortable with a pen and paper than a keyboard and mouse. If making a web page seems like brain surgery to you, then this is the article for you. What you need to know

Eye for Film : Hotel Splendide Movie Review (2000) "British" and "film" are not always the greatest combination of words on the planet. In fact lately the rash of films trying to emulate the Englishness of Four Weddings And A Funeral, the gruesomeness of Shallow Grave or the plucky northerner spirit of the hugely successful The Full Monty (see There's Only One Jimmy Grimble or Billy Elliot for more examples) seem to have seriously put back the British film industry. In this state of mind I toddled along to Hotel Splendide, concerned it would fall somewhere between Fawlty Towers and Guesthouse Paradiso or, God forbid, worse. So it's with some relief that I can report that Splendide is in fact a great deal better than expected if rather less, er, splendid than it could be...

15 sites web developers and designers should know Creating a good website isn't an easy task, but there's a few tools that can definitely make your developer or designer life easier. In this article, I have compiled 15 extremely useful website that any web developer or web designer should have bookmarked. ColorCombos untitled (An essay concerning the subtext of the film by the same title) by Crispin Hellion Glover Is this culture content? Is it happy? Are the smiles broadcast by this culture's media the smiles that reflect the collective mind? Does the self-professed compassion of the media for the unfortunate seem sincere? Is this culture a Judeo-Christian culture?

Supercut: Cinema's Greatest Mirror Pep Talks Early this morning, I was awoken by three consecutive wall thumps coming from my crawl space, which, as you all know, is the signal from our video editor, Oliver Noble, that he’s completed a new supercut. After I let him out, we watched it, and it was pretty good, so I rewarded him with a few minutes with his gimp mask unzipped and gave him some bactine for his welts. This is actually our second crowd-sourced supercut, where Oliver provided the topic and you the FilmDrunk reader gave scene suggestions. The result is Cinema’s Greatest Mirror Pep Talk.

The 9 limits of our planet … and how we’ve raced past 4 of them Johan Rockström says humanity has already raced past four of the nine boundaries keeping our planet hospitable to modern life. Writer John Carey digs into the “planetary boundary” theory — and why Rockström says his isn’t, actually, a doomsday message.We’ve been lucky, we humans: For many millennia, we’ve been on a pretty stable — and resilient — planet. As our civilizations developed, we’ve transformed the landscape by cutting down forests and growing crops.

Spalding Gray Spalding Rockwell Gray (June 5, 1941 – ca. January 11, 2004) was an American actor and writer. He is known for the autobiographical monologues that he wrote and performed for the theater in the 1980s and 1990s. Gray died in New York City, New York, of an apparent suicide in 2004. Steven Soderbergh made a 2010 documentary film about Gray's life entitled And Everything Is Going Fine. Early life[edit]

The 50 Most Genuinely Creepy Horror Movies They rely on atmosphere and suspense rather than gore and jump-scares. Here’s our pick of the 50 most genuinely creepy horror movies… Creepy isn’t the same as scary. Films can be scary simply by using loud noises and sudden movements to make their audiences jump; they can play on primal fears and physical reactions to give you a thrill. But creepy is harder to pull off.

The Anthropocene epoch: scientists declare dawn of human-influenced age Humanity’s impact on the Earth is now so profound that a new geological epoch – the Anthropocene – needs to be declared, according to an official expert group who presented the recommendation to the International Geological Congress in Cape Town on Monday. The new epoch should begin about 1950, the experts said, and was likely to be defined by the radioactive elements dispersed across the planet by nuclear bomb tests, although an array of other signals, including plastic pollution, soot from power stations, concrete, and even the bones left by the global proliferation of the domestic chicken were now under consideration. The current epoch, the Holocene, is the 12,000 years of stable climate since the last ice age during which all human civilisation developed. “If our recommendation is accepted, the Anthropocene will have started just a little before I was born,” he said.