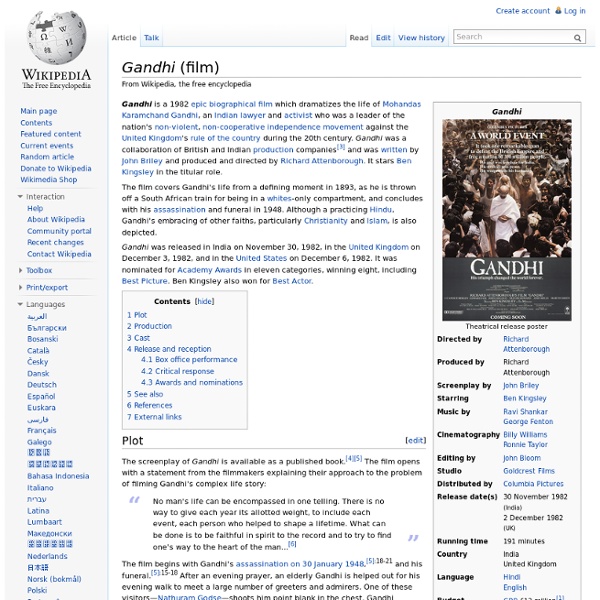 Gandhi is a 1982 epic biographical film which dramatises the life of Mohandas Karamchand Gandhi, the leader of India's non-violent, non-cooperative independence movement against the United Kingdom's rule of the country during the 20th century. Gandhi was a collaboration of British and Indian production companies[3] and was written by John Briley and produced and directed by Richard Attenborough. It stars Ben Kingsley in the titular role. The film covers Gandhi's life from a defining moment in 1893, as he is thrown off a South African train for being in a whites-only compartment, and concludes with his assassination and funeral in 1948. Although a practising Hindu, Gandhi's embracing of other faiths, particularly Christianity and Islam, is also depicted. Gandhi was released in India on 30 November 1982, in the United Kingdom on 3 December 1982, and in the United States on 6 December 1982. The early life of Gandhi is not depicted in the film. 55th Academy Awards

Famous People - celebrity and historical Mohandas Karamchand Gandhi (October 2, 1869 – January 30, 1948) (Devanagari:Gujarati) was a national icon who led the struggle for India's independence from British colonial rule, empowered by tens of millions of common Indians. Throughout the struggle he opposed any form of terrorism or violence, instead using only the highest moral standards. His philosophy of nonviolence, for which he coined the term satyagraha, has influenced national and international nonviolent resistance movements to this day, including the American Civil Rights Movement (1955-1968) led by Martin Luther King Jr. Mohandas Gandhi was, and still is, a deeply popular icon and inspiration to many Indians since he took charge of the freedom struggle and the Indian National Congress in 1918. By means of nonviolent civil disobedience, Gandhi helped bring about India's independence from British rule, inspiring other colonial peoples to work for their own independence and ultimately dismantling the British Empire.

Mahatma Gandhi | Spiritual/Political Leader and Humanitarian At age 13, Gandhi joined Kasturba, age 12, in a marriage arranged by their parents. The Gandhis had four sons: Harilal and Manilal, born in India, and Ramdas and Devdas born in South Africa. While Gandhi displayed loving kindness to everyone else, he was quite demanding and severe with his wife and sons. Use the links below to learn more about Gandhi's relationship with his family. Gandhi studied law in London and returned to India in 1891 to practice. In 1915 Gandhi returned to India. India was granted independence in 1947, and partitioned into India and Pakistan. Among the tributes to Gandhi upon his death were these words by the great physicist, Albert Einstein: “Generations to come will scarce believe that such a one as this walked the earth in flesh and blood.” If you are aware of books, movies, databases, web sites or other information sources about Mahatma Gandhi or related subjects, or if you would like to comment, please contact us . Resource Menu Books By/About Gandhi Gandhi Images

Mahatma Gandhi Jainism and Buddhism both arose in the sixth century bce in protest to Hinduism. Both offered alternatives to the caste system and denied that the Vedas (See Hinduism, Development of) were "inspired" scriptures. The founder of Jainism (See Jainism), Mahavira, was a contemporary of the Buddha, Confucius, Lao Tzu, and the Hebrew prophets Jeremiah, Ezekiel, and Isaiah. Although most of these men did not know each other, of course, it points out the fact that this was a yeasty time of religious ferment. Of all the religions these people represent, Jainism, now considered to be a minority sect of Hinduism, is probably the least known in America, but it had a great effect upon late twentieth-century America. Mohandas Karamchand Gandhi, later called Mahatma, the "Great Soul," was born in British-controlled Porbandar, India, on October 2, 1869. Although Gandhi was Hindu, he was very much influenced by the Jain practice of ahimsa, nonviolence to all living things. Gandhi was inevitable.