Tokyo Godfathers. The Junky's Christmas. 5am Film Series: The Bohemia. 9 Shocking Documentaries (documentaries, real life, film) Zoo: A documentary about men who "love" horses Zoo (2007) tells the true story of a group of men who are zoophiles – people with a sexual attraction to animals. 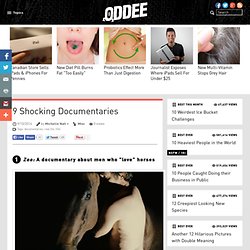 In the case of this particular group, located in Enumclaw, WA, their attraction was to farm animals, and they gained media attention after the demise of 45-year-old Kenneth Pinyan, known to the public only as "Mr. Hands" (his internet handle). Pinyan died, according to the coroner's report, from "acute peritonitis ... perforation of the sigmoid colon by a horse. " Zoo portrays Pinyan and company fairly sympathetically, and while there are no graphic scenes of sexual acts between men and animals, it's still a tough and bizarre watch. Seeing The Future With Anthony Peake. Neurons To Nirvana. Technology / BMC Labs. It has been known for more than a decade that neurons and other biological cell-types grown on the surface of microprocessors are able to exchange information with those microprocessors. 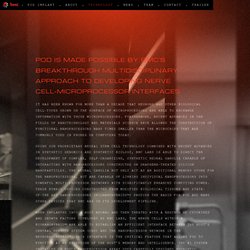 Furthermore, recent advances in the fields of nanotechnology and materials science have allowed the construction of functional nanoprocessors many times smaller than the microchips that are commonly used in phones or computers today. Using our proprietary neural stem cell technology combined with recent advances in synthetic genomics and synthetic biology, BMC Labs is able to direct the development of complex, self-organizing, synthetic neural ganglia capable of interacting with nanoprocessors constructed on graphene-treated silicon nanoparticles. The neural ganglia not only act as an additional memory store for the nanoprocessors, but are capable of linking individual nanoprocessors into powerful multi-processor networks with significantly enhanced computing power.

Riki Oh: The Story of Ricky (Full Movie in English) The 40 Best Foreign Films to Stream Instantly. In the golden age of the so-called “art cinema”, college-aged cineastes and middle-aged professorial types needed only to congregate at the local repertory theatre for a fix of the latest and greatest in international film. 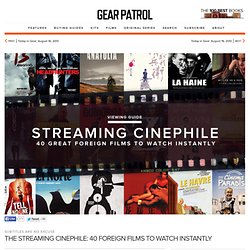 They could catch a Bergman-Fellini double feature and wile away the evening in a coffee shop discussing the Christ-figure symbolism or whatever. “If only I had lived then”, laments the modern cinephile, “what films I could have seen.” Our young moviegoer, correct though they may be to bemoan the passing of Truffaut’s heyday, has forgotten one thing: a vast library of international movies are available to watch instantly with the stroke of a keyboard, granted they’re already paying for access to services like Netflix, Hulu Plus and Amazon Prime.

The same goes for you, Mr. Ignorant Summer Blockbuster. But nothing’s ever that easy. GRAB YOUR OVERPRICED POPCORN: Dolby Atmos, Explained | The Curse of Comedy Triplets | Comprehensive Guide to 2013′s Summer Movies. Last Man On Earth (Color, 1964) - Full Movie. Legend Of The Witches - Witchcraft documentary film, 1970, Alex Sanders. Documentary: The History of the Devil. Blue Remembered Hills. It's a Wonderful Life. Being There (1979) What A Way to Go: Life at the End of Empire. Stanley Kubrick : Life in Pictures. Redtube Album. In the Realms of the Unreal. 10 Craziest Short Films - Oddee.com (short films ideas, greatest short films...) Memoirs of a Scanner: a short film made with a scanner Memoirs of a Scanner by Mindfruit Films was shot with just an office image scanner. 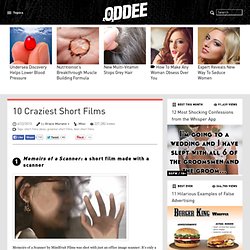 It's only a minute long and composed entirely of still shots, but it has a coherent plot. Directed by Damon Stea. Between You and Me: the short film made with a still camera using 2000 photographs to form movements This film captured an international audience and prestigious awards for its innovative approach to still photography. Logorama: the short film about trademarks that won an Oscar A 16-minute animated film, entirely populated by trademarks as both characters and props, won an upset Academy Award.

Logorama is festooned with trademark and copyright questions, right down to the Shapard Fairey “OBEY” street art in the background on a scene. Destino: a short animated cartoon by Disney and Dali In 1946, famed surrealist artist Salvador Dali and Walt Disney became unlikely collaborators, and set to work on a short film called Destino. CL! Short Film: 'Eclipse' The Fountainhead. Orwellwasright's Weblog. 'Obey': Film Based on Chris Hedges' 'Death of the Liberal Class' Alan Moore’s New Film, ‘Jimmy’s End’ and the IS-ness of Being Who I AM. I feel like a virgin walking into a cosmological gang-bang. 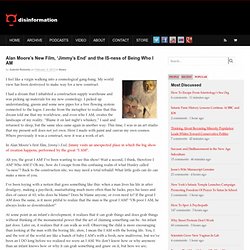 My world view has been destroyed to make way for a new construct. I had a dream that I inhabited a construction supply warehouse and was picking up materials for my new cosmology. I picked up understanding, gnosis and some new pipes for a free flowing system connected to the logos. I awoke from the metaphor to realize that this dream told me that my worldview, and even who I AM, creates the landscape of my reality. “Blame it on last night’s whiskey,” I said and returned to sleep, but the same idea came again in another way: This time, I was in an art studio that my present self does not yet own. In Alan Moore’s first film, Jimmy’s End, Jimmy visits an unexpected place in which the big show of creation happens, performed by the great “I AM”.