Watch The Departed For Free On 123Movies.to. A Granny's Guide to the Modern World - On Demand - All 4. This Is England '88 - Channel 4. Where have the Rothschilds disappeared to? Our Survival Depends On Keeping The Oil In The Ground. Path of Freedom - Transcendental Meditation in Prisons. Brazil's Largest City Takes on Transition. The Best Social Change Documentaries of 2013. 2013 was another incredible year for fantastic, forward thinking social change films. 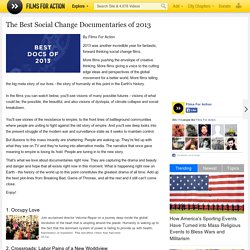 More films pushing the envelope of creative thinking. More films giving a voice to the cutting edge ideas and perspectives of the global movement for a better world. Campsfield Immigration Removal Centre - Behind The Barbed Wire. The Koch Brothers & Their Amazing Climate Change Denial Machine. Greece: The End of Austerity? (2015) The Super-Rich and Us (2015) BBC documentary in which Jacques Peretti investigates how the super-rich are transforming Britain. 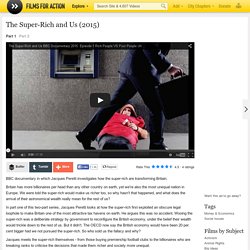 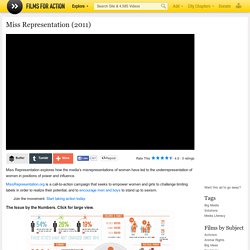 MissRepresentation.org is a call-to-action campaign that seeks to empower women and girls to challenge limiting labels in order to realize their potential, and to encourage men and boys to stand up to sexism. Join the movement. Start taking action today. The Power of Community: How Cuba Survived Peak Oil (2006) The World According to Monsanto (2008) A documentary that Americans won't ever see. 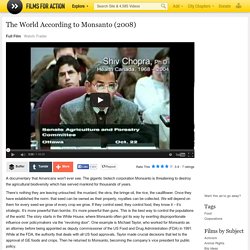 The gigantic biotech corporation Monsanto is threatening to destroy the agricultural biodiversity which has served mankind for thousands of years. There’s nothing they are leaving untouched: the mustard, the okra, the bringe oil, the rice, the cauliflower. Once they have established the norm: that seed can be owned as their property, royalties can be collected. We will depend on them for every seed we grow of every crop we grow. If they control seed, they control food, they know it – it’s strategic. Thanks to these intimate links between Monsanto and government agencies, the US adopted GE foods and crops without proper testing, without consumer labeling and in spite of serious questions hanging over their safety. Reel Bad Arabs: How Hollywood Vilifies a People (2007) This groundbreaking documentary dissects a slanderous aspect of cinematic history that has run virtually unchallenged from the earliest days of silent film to today's biggest Hollywood blockbusters. 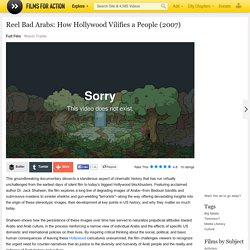 Featuring acclaimed author Dr. Jack Shaheen, the film explores a long line of degrading images of Arabs--from Bedouin bandits and submissive maidens to sinister sheikhs and gun-wielding "terrorists"--along the way offering devastating insights into the origin of these stereotypic images, their development at key points in US history, and why they matter so much today. Edible City: Grow the Revolution (2012) No Logo: Brands. Globalization. Resistance. (2003) First Earth: Uncompromising Ecological Architecture (2010)

FIRST EARTH is a documentary about the movement towards a massive paradigm shift for shelter -- building healthy houses in the old ways, out of the very earth itself, and living together like in the old days, by recreating villages. 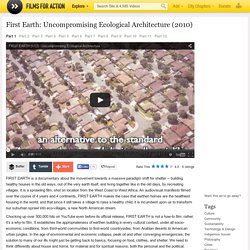 It is a sprawling film, shot on location from the West Coast to West Africa. An audiovisual manifesto filmed over the course of 4 years and 4 continents, FIRST EARTH makes the case that earthen homes are the healthiest housing in the world; and that since it still takes a village to raise a healthy child, it is incumbent upon us to transform our suburban sprawl into eco-villages, a new North American dream. Chocking up over 300,000 hits on YouTube even before its official release, FIRST EARTH is not a how-to film; rather, it's a why-to film. FIRST EARTH official Chapter 1 - Prologue: What's Wrong With Architecture Chapter 2 - African Earth Chapter 3 - American Earth. Watch the Full Documentary Online.

Watch the Full Documentary Online. Garbage Warrior (2007) What do beer cans, car tires and water bottles have in common? 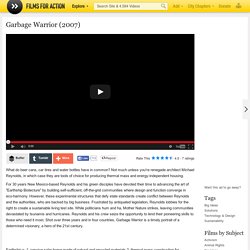 Not much unless you're renegade architect Michael Reynolds, in which case they are tools of choice for producing thermal mass and energy-independent housing. For 30 years New Mexico-based Reynolds and his green disciples have devoted their time to advancing the art of "Earthship Biotecture" by building self-sufficient, off-the-grid communities where design and function converge in eco-harmony. However, these experimental structures that defy state standards create conflict between Reynolds and the authorities, who are backed by big business.

Frustrated by antiquated legislation, Reynolds lobbies for the right to create a sustainable living test site. Watch the Full Documentary Online. In the wake of the financial crisis and the recent rise of the Occupy movement, the issue of income inequality has gained unprecedented public awareness. 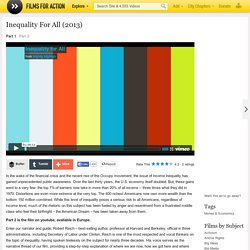 Over the last thirty years, the U.S. economy itself doubled. But, these gains went to a very few: the top 1% of earners now take in more than 20% of all income -- three times what they did in 1970. Distortions are even more extreme at the very top. The 400 richest Americans now own more wealth than the bottom 150 million combined. While this level of inequality poses a serious risk to all Americans, regardless of income level, much of the rhetoric on this subject has been fueled by anger and resentment from a frustrated middle class who feel their birthright – the American Dream – has been taken away from them.

Check Out What the Urban Farming Guys Have Been Doing the Last 3 Years. You're Gonna Be Amazed. Watch the Full Documentary Online. Outfoxed: Rupert Murdoch's War on Journalism (2004) Outfoxed shows how the Fox News channel is used to promote and advocate right-wing views. 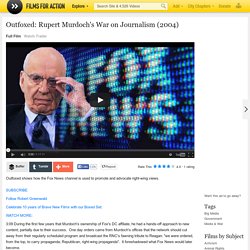 Follow Robert Greenwald Celebrate 10 years of Brave New Films with our Boxed Set: 3:09 During the first few years that Murdoch's ownership of Fox's DC affiliate, he had a hands-off approach to new content; partially due to their success. HOT COFFEE, a documentary feature film. We'd Have Revolution If People Understood This. Martin Luther King, Jr. was working towards a guaranteed basic income for all when he was killed. 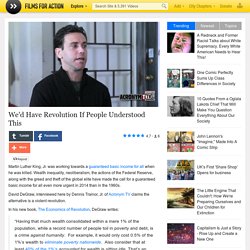 Watch the Full Documentary Online. Fresh: New Thinking about What We're Eating (2009) FRESH celebrates the farmers, thinkers and business people across America who are re-inventing our food system. Each has witnessed the rapid transformation of our agriculture into an industrial model, and confronted the consequences: food contamination, environmental pollution, depletion of natural resources, and morbid obesity. Forging healthier, sustainable alternatives, they offer a practical vision for a future of our food and our planet. Among several main characters, FRESH features urban farmer and activist, Will Allen, the recipient of MacArthur’s 2008 Genius Award; sustainable farmer and entrepreneur, Joel Salatin, made famous by Michael Pollan’s book, The Omnivore’s Dilemma; and supermarket owner, David Ball, challenging our Wal-Mart dominated economy.

Watch the Full Documentary Online. When Pat Tillman gave up his professional football career to join the Army Rangers in 2002, he became an instant symbol of patriotic fervor and unflinching duty. But the truth about Pat Tillman is far more complex, and ultimately far more heroic, than the caricature. And when the government tried to turn his death into propaganda, they took on the wrong family. From her home in Northern California, Pat’s mother, Dannie Tillman, led the family’s crusade to reveal the truth beneath the mythology of their son’s life and death.