One Day on Earth. The Big Picture. DRS. 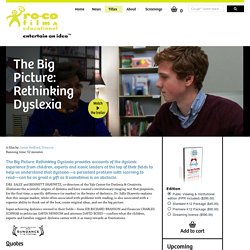 SALLY and BENNETT SHAYWITZ, co-directors of the Yale Center for Dyslexia & Creativity, illuminate the scientific origins of dyslexia and have created a revolutionary imaging test that pinpoints, for the first time, a specific difference (or marker) in the brains of dyslexics. Dr. Most Valuable Players. Across the USA, high school sports are regularly lavished with funding, publicity and scholarships, while theater departments struggle to put on the school musical hoping for some recognition of their own. 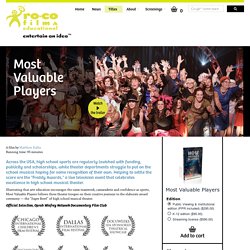 Helping to settle the score are the "Freddy Awards," a live television event that celebrates excellence in high school musical theater. Illustrating that arts education encourages the same teamwork, camaraderie and confidence as sports, Most Valuable Players follows three theater troupes on their creative journeys to the elaborate award ceremony — the "Super Bowl" of high school musical theater. Official Selection, Oprah Winfrey Network Documentary Film Club. Connected. From founding The Webby Awards to being a passionate advocate for The National Day of Unplugging, Her love/hate relationship with technology serves as the springboard for a thrilling exploration of modern life…and our interconnected future. 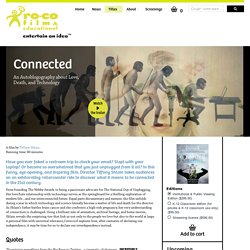 Equal parts documentary and memoir, the film unfolds during a year in which technology and science literally become a matter of life and death for the director. As Shlain’s father battles brain cancer and she confronts a high-risk pregnancy, her very understanding of connection is challenged. Using a brilliant mix of animation, archival footage, and home movies, Shlain reveals the surprising ties that link us not only to the people we love but also to the world at large.

A personal film with universal relevance,Connected explores how, after centuries of declaring our independence, it may be time for us to declare our interdependence instead. Quotes. Particle Fever. The Big Picture. Louder Than a Bomb. Louder Than A Bomb tells the story of four Chicago high school poetry teams as they prepare to compete in the world's largest youth slam. 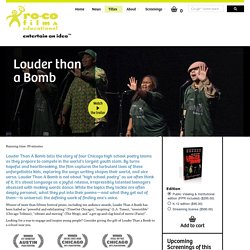 By turns hopeful and heartbreaking, the film captures the turbulent lives of these unforgettable kids, exploring the ways writing shapes their world, and vice versa. Louder Than A Bomb is not about "high school poetry" as we often think of it. It's about language as a joyful release, irrepressibly talented teenagers obsessed with making words dance. A Small Act. When Hilde Back sponsored a young, rural Kenyan student, she thought nothing of it. 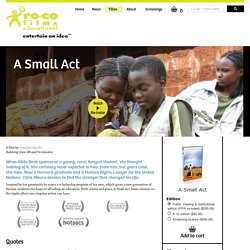 She certainly never expected to hear from him, but years later, she does. Now a Harvard graduate and a Human Rights Lawyer for the United Nations, Chris Mburu decides to find the stranger that changed his life. Girl Rising. Nine unforgettable girls – striving beyond circumstance, pushing past limits – spotlighted in a film about the strength of the human spirit and the power of education to change the world. 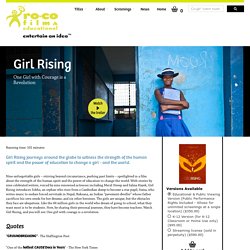 With stories by nine celebrated writers, voiced by nine renowned actresses including Meryl Streep and Salma Hayek, Girl Rising introduces Sokha, an orphan who rises from a Cambodian dump to become a star pupil; Suma, who writes music to endure forced servitude in Nepal; Ruksana, an Indian “pavement-dweller” whose father sacrifices his own needs for her dreams; and six other heroines. The girls are unique, but the obstacles they face are ubiquitous. Like the 66 million girls in the world who dream of going to school, what they want most is to be students. Now, by sharing their personal journeys, they have become teachers. Watch Girl Rising, and you will see: One girl with courage is a revolution. American Promise. The American Promise journey began in 1999, when filmmakers Joe Brewster and Michèle Stephenson enrolled their son Idris in the Dalton School on the Upper East Side of Manhattan after the private institution boldly strengthened its commitment to cultivating a diverse student body. 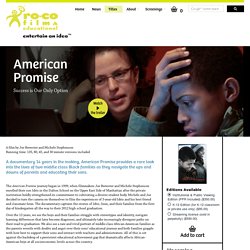 Michèle and Joe decided to turn the camera on themselves to film the experiences of 5-year-old Idris and his best friend and classmate Seun. The documentary captures the stories of Idris, Seun, and their families from the first day of kindergarten all the way to their 2012 high school graduation. Promises. A beautiful and deeply moving portrait of seven Palestinian and Israeli children. 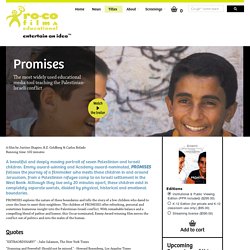 Emmy award-winning and Academy award-nominated, PROMISES follows the journey of a filmmaker who meets these children in and around Jerusalem, from a Palestinian refugee camp to an Israeli settlement in the West Bank. Although they live only 20 minutes apart, these children exist in completely separate worlds, divided by physical, historical and emotional boundaries. PROMISES explores the nature of these boundaries and tells the story of a few children who dared to cross the lines to meet their neighbors. The children of PROMISES offer refreshing, personal and sometimes humorous insight into the Palestinian-Israeli conflict. With remarkable balance and a compelling blend of pathos and humor, this Oscar-nominated, Emmy Award winning film moves the conflict out of politics and into the realm of the human. American Promise. Inequality For All. A passionate argument on behalf of the middle class, INEQUALITY FOR ALL features Robert Reich – professor, best-selling author, and Clinton cabinet member - as he demonstrates how the widening income gap has a devastating impact on the American economy. 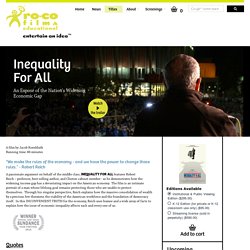 The film is an intimate portrait of a man whose lifelong goal remains protecting those who are unable to protect themselves. Through his singular perspective, Reich explains how the massive consolidation of wealth by a precious few threatens the viability of the American workforce and the foundation of democracy itself. Poverty, Inc. The West has positioned itself as the protagonist of development, giving rise to a vast multi-billion dollar poverty industry — the business of doing good has never been better. 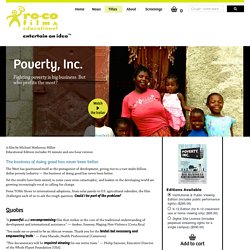 Yet the results have been mixed, in some cases even catastrophic, and leaders in the developing world are growing increasingly vocal in calling for change. From TOMs Shoes to international adoptions, from solar panels to U.S. agricultural subsidies, the film challenges each of us to ask the tough question: Could I be part of the problem? Quotes. Pray the Devil Back to Hell. This powerful documentary film has been screened at: · World Economic Forum· United Nations· U.S. Department of State· Ministry of Foreign Affairs at the Hague Quotes "UPLIFTING, DISHEARTENING, INSPIRING, ENRAGING"—The New York Times "MARVELOUS"—The Los Angeles Times.

E-TEAM. Then they get to work — gathering crucial evidence to determine if further investigation is warranted and, if so, to investigate, document, and capture the world's attention. They also immediately challenge the responsible decision makers, holding them accountable. Human rights abuses thrive on secrecy and silence, and the work of the E-Team, backed by their international human rights organization, has shone light in dark places and given voice to thousands whose stories would never otherwise have been told.

Using a cinema verite approach, our camera follows the E-Team investigators in the field as they piece together the actual events that take place in troubled spots around the globe. Together we smuggle across the border into Syria to conduct undercover investigations as the civil war rages; amidst bullets and bombs we watch as Fred and Peter work to halt human rights abuses in the aftermath of the Gaddafi regime. Quotes. How to Survive a Plague. Despite having no scientific training, these self-made activists infiltrated the pharmaceutical industry and helped identify promising new drugs, moving them from experimental trials to patients in record time. With unfettered access to a treasure trove of never-before-seen archival footage from the 1980s and '90s, filmmaker David France puts the viewer smack in the middle of the controversial actions, the heated meetings, the heartbreaking failures, and the exultant breakthroughs of heroes in the making.

Blisteringly powerful, How To Survive A Plague transports us back to a vital time of unbridled death, political indifference, and staggering resilience and constructs a commanding archetype for activism today. Quotes. Promises. Chasing Ice. The Crash Reel. This eye-popping film seamlessly combines twenty years of stunning action footage with new specially-shot verité footage and interviews as it follows U.S. champion snowboarder Kevin Pearce and exposes the irresistible but potentially fatal appeal of extreme sports.

An escalating rivalry between Kevin and his nemesis Shaun White in the run-up to the 2010 Olympics leaves Shaun on top of the Olympic podium and Kevin in a coma follow- ing a training accident in Park City, Utah. Kevin's tight-knit Vermont family flies to his side and helps him rebuild his life as a brain injury survivor. But when he insists he wants to return to the sport he still loves, his family intervenes with his eloquent brother David speaking for all of them when he says, “I just don’t want you to die.” The World Before Her. The Miss India pageant is the ultimate glamour event in a country that has gone mad for beauty contests. Winning the coveted title means instant stardom, a lucrative career path and, for some girls, freedom from the constraints of a patriarchal society.

Through dramatic verite action and unprecedented behind-the-scenes access, The World Before Her sweeps back the curtain to reveal the intimate stories of twenty young women determined to win the crown. As the beauty contestants move through beauty boot camp, Director Nicha Pahuja travels to another corner of India to visit a different camp for young girls, the women's wing of the militant fundamentalist movement. 65 Red Roses. Girl Rising. The Case Against 8. Pray the Devil Back to Hell. One Lucky Elephant. How to Survive a Plague. The Crash Reel. Budrus. The Big Picture. Terms and Conditions May Apply. The Great Invisible. (Dis)Honesty. Most Valuable Players. The Crash Reel. Louder Than a Bomb. A Small Act. One Lucky Elephant.

Surviving Hitler: A Love Story. The Genius of Marian. The Case Against 8. A Small Act. La Source. A Place At The Table. One Lucky Elephant. Promises. Connected. The Human Face of Big Data. The World Before Her. The Great Invisible. The Hunting Ground. The Human Face of Big Data. A Place At The Table. Food Chains. Poverty, Inc. Toxic Hot Seat. E-TEAM. Chasing Ice. Most Valuable Players. Particle Fever.

Food Chains. The Case Against 8. (Dis)Honesty: The Truth About Lies. Louder Than a Bomb. Chasing Ice. The Crash Reel. Pray the Devil Back to Hell. Pray the Devil Back to Hell. Promises. The Crash Reel. AWAKE: The Life of Yogananda. One Day on Earth. How to Survive a Plague. E-TEAM. The Crash Reel. (Dis)Honesty: The Truth About Lies. One Day on Earth. Chasing Ice. 65 Red Roses. Poverty, Inc. A Small Act. The Genius of Marian. Connected. Louder Than a Bomb. Most Valuable Players.

AWAKE: The Life of Yogananda. Pray the Devil Back to Hell.