THE CLUB OF ROME (www.clubofrome.org) 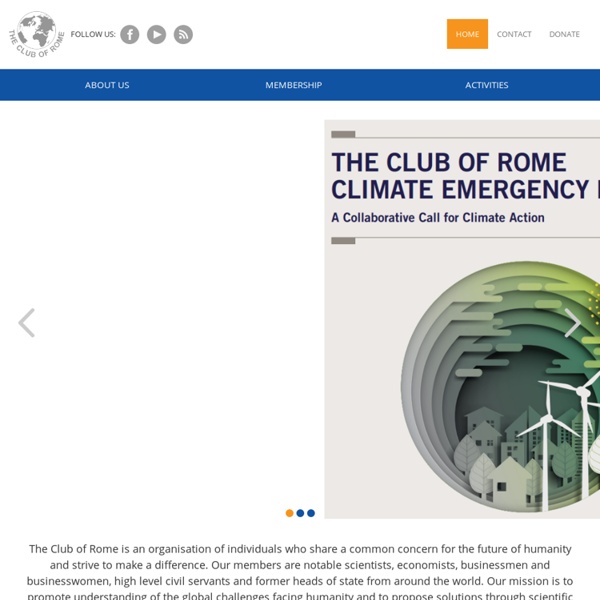 Club of Rome “How the Quest for Mineral Wealth Is Plundering the Planet” – Find out more about the 33rd Report to the Club of Rome, to be released in English on 12th June 2014! [...] Shale Gas Fracking – Bubble, Scare or Solution? Hydraulic fracturing – or “fracking” – of shale gas is a highly controversial contemporary topic in politics, society and business alike. As a main finance and trading hub for commodities, Switzerland plays a key role herein. [...]

Johnny Description Release 1.1 After small fixes actual version is 1.1.3. The Show Must Go On Report - Powerful Thinking The Show Must Go On report (November 2015) was conceived as a festival industry response to the Paris climate change talks in 2015. The report brings together all known UK research and analyses the most comprehensive datasets available on the environmental impact of festivals. The report aims to: Flywheel Trevithick's 1802 steam locomotive used a flywheel to evenly distribute the power of its single cylinder. Common uses of a flywheel include: Smoothing the power output of an energy source. For example, flywheels are used in reciprocating engines because the active torque from the individual pistons is intermittent.Energy storage systemsDelivering energy at rates beyond the ability of an energy source. This is achieved by collecting energy in a flywheel over time and then releasing it quickly, at rates that exceed the abilities of the energy source.Controlling the orientation of a mechanical system, gyroscope and reaction wheel Flywheels are typically made of steel and rotate on conventional bearings; these are generally limited to a maximum revolution rate of a few thousand RPM.[1] High energy density flywheels can be made of carbon fiber composites and employ magnetic bearings, enabling them to revolve at speeds up to 60,000 RPM (1 kHz).[2]

Murphy's Law Calculator Murphy's Law Calculator From a formula for * Sod's Law provided by British Gas: ((U+C+I) x (10-S))/20 x A x 1/(1-sin(F/10)) "anything that can go wrong, will go wrong!" Find out in advance whether you will be able to successfully repair your VCR, get to a meeting on time, impress your date, or be a success at any activity whatsoever ! Club of Rome The Club of Rome is a global think tank that deals with a variety of international political issues. Founded in 1968 at Accademia dei Lincei in Rome, Italy, the CoR describes itself as "a group of world citizens, sharing a common concern for the future of humanity." It consists of current and former heads of state, UN bureaucrats, high-level politicians and government officials, diplomats, scientists, economists and business leaders from around the globe.[1] It raised considerable public attention in 1972 with its report The Limits to Growth. The club states that its mission is "to act as a global catalyst for change through the identification and analysis of the crucial problems facing humanity and the communication of such problems to the most important public and private decision makers as well as to the general public."[2] Since 1 July 2008, the organization has its headquarters in Winterthur, Switzerland.

Writings Home » Writings Books Bernard Lietaer is the author of The Future of Money and several other books about money and money systems and management. He has also authored several books in other languages. Rethinking money, How new currencies turn scarcity into prosperity, by Bernard Lietaer and Jacqui Dunne, Berrett-Koehler publishers, February 2013. NEW!