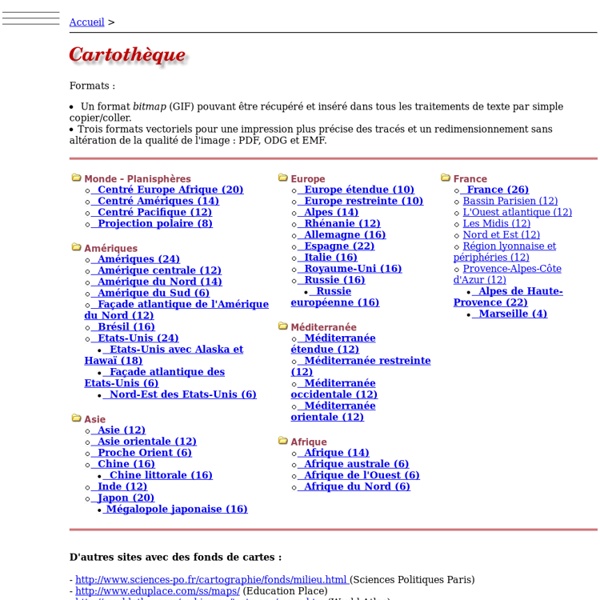 Google Apps and sites Sites and Apps for Education Mappe Concettuali, Aggregatori di lezioni, Repository Thinglink Mindomo Blendspace Pearltrees OpenStreetMap Where is this? Reverse Directions Welcome to OpenStreetMap! OpenStreetMap is a map of the world, created by people like you and free to use under an open license. Hosting is supported by UCL, Bytemark Hosting, and other partners. Norkart Virtual Globe load and start page This page loads and starts a Virtual Globe with the following parameters: The Virtual Globe requires Java 1.5 or better installed on your computer, testing for Java: Your browser doesn't tell if you have Java installed or not. You can try to click here to start the Virtual Globe. If it doesn' work you should try to download and install Java first. Your browser may ask what to do with a file of type application/x-java-jnlp-file, you should specify that it should be opened by the program javaws.

free.onlinemapfinder Please read carefully: By checking the box and clicking the button, you agree to install the OnlineMapFinder Homepage & New Tab and to receive future updates or upgrades released including for performance and compatibility purposes. Your use is governed by the End User License Agreement. You can uninstall the program at any time. Your information will be collected, used and disclosed in accordance with our Privacy Policy. Access Earth map street view, map street views, Florida state map with cities, maps of Texas with cities and more streetmaps. OpenStreetMap Where am I? Welcome to OpenStreetMap! OpenStreetMap is a map of the world, created by people like you and free to use under an open license. Hosting is supported by UCL, Bytemark Hosting and Imperial College London, and other partners.

Relief Map i Hans Braxmeier, Donaustraße 13, 89231 Neu-Ulm, mail@braxmeier.de Intention Three Geography Games Based on Google Maps and Google Earth One of the things that I emphasize to students before they embark on any kind of research or problem-solving task is to take a good long look at the information that they already have before them. To that end, I'll often request that they construct a list of what they know about a topic or problem before they begin to search. Playing one of the following three Google Maps-based games is a fun way to reinforce the concept of using prior knowledge and observations. GeoGuessr is an addictive geography game that is based on the Google Maps Street View imagery. When you visit GeoGuessr you can choose to play as a single player or you can register to challenge another player. The game is played the same way whether you choose single player or challenge mode.