Hong Yi Plays with her Food. For almost every day last month Malaysian artist/architect Hong Yi (who often goes by the nickname Red) created a fun illustration made with common (and occasionally not so common) food. 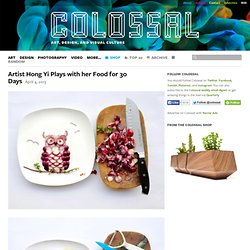 Her parameters were simple: the image had to be comprised entirely of food and the only backdrop could be a white plate. With that in mind Yi set out to create landscapes, animals, homages to pop culture, and even a multi-frame telling of the three little pigs. The project, which still appears to be ongoing, has been documented heavily around the web, but if you haven’t seen it all head over to her Facebook and read an interview on designboom. Photos will also be appearing on her Instagram at @redhongyi. "Cuttemporary Art" series by Sakir Gökçebag. And I have trouble cutting a sandwich on a perfect diagonal for my son. 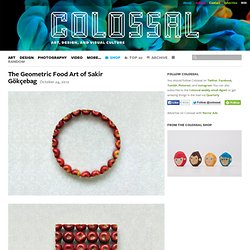 From watermelons to green beans and apples to pomegranates, Turkish photographer Sakir Gökçebag slices common fruits and veggies to create striking geometric arrangements. To clarify: the photos you see here haven’t been digitally manipulated but are instead the result of meticulously precise cutting worthy of a surgeon. If you want to see more I strongly urge you to check out the installations and photography projects on his website. (via designboom) National Flags Made From Each Country's Traditional Foods. "Sugar Series" series by Emily Bilcoe. Motoi Yamamoto creates intricate labyrinths of salt. Art The artworks you see below are made of nothing but salt. 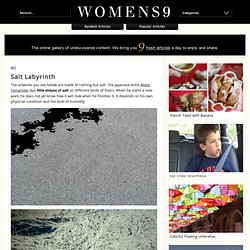 The Japanese artist Motoi Yamamoto lays little stripes of salt on different kinds of floors. When he starts a new work, he does not yet know how it will look when he finishes it. It depends on his own physicial condition and the level of humidity. "A Colorful Winter" series by Florent Tanet. A Colorful Winter is a new series of works by photographer Florent Tanet currently on display at the famous Le Bon Marché department store in Paris through February 16th. 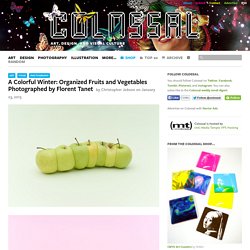 The clever arrangements of common fruits and vegetables against pastel backdrops play with color, scale, and shape creating whimsical still lifes meant to act as a reprieve from a dreary winter. If you liked this also check out the work of Sarah Illenberger or Sakir Gökçebag. Also don’t miss Carl and Evelina’s Homage to Calder. You can see much more Tanet’s work on his website. (via ignant) 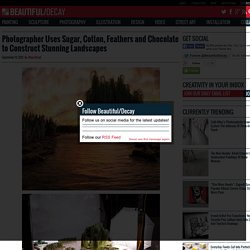 “DIY Paradise” was constructed from cotton, salt, cooked sugar, tin foil, feathers & canvas. My work involves the construction of small-scale meticulously detailed models using various materials and objects to create emotive landscapes. Every aspect from the construction to the lighting of the final model is painstakingly pre-planned using methods which force the viewers perspective when photographed from a specific angle. Using a mixture of photographic techniques such as scale, depth of field, white balance and lighting I am able to drastically alter the appearance of my materials. 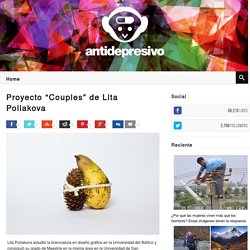 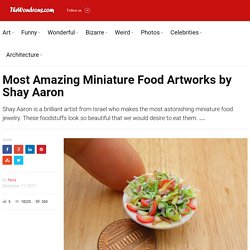 These foodstuffs look so beautiful that we would desire to eat them. Actually, there’s a whole market out there for miniature food. Not actual stuff you can eat, but beautifully hand made designs of steaks, burgers, pies, vegetables, eggs and pretty much food artworks you can think of. Comments comments. “It’s not what it seems” series by Hikaru Cho. In this fun series of painted objects titled “It’s not what it seems” by artist Hikaru Cho, common foods are transformed with deftly applied acrylic paints to look like other foods. 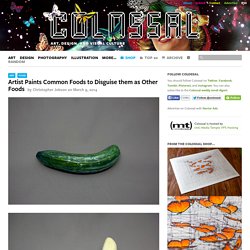 A banana is turned into a near photo-realistic cucumber, a tomato becomes a tangerine, and even an egg is made into a glistening eggplant. These are actually some of Cho’s “tamer” artworks, as she’s used these same skills with a paintbrush to alter human faces and body parts by adding extra eyes, zippers and mouths.