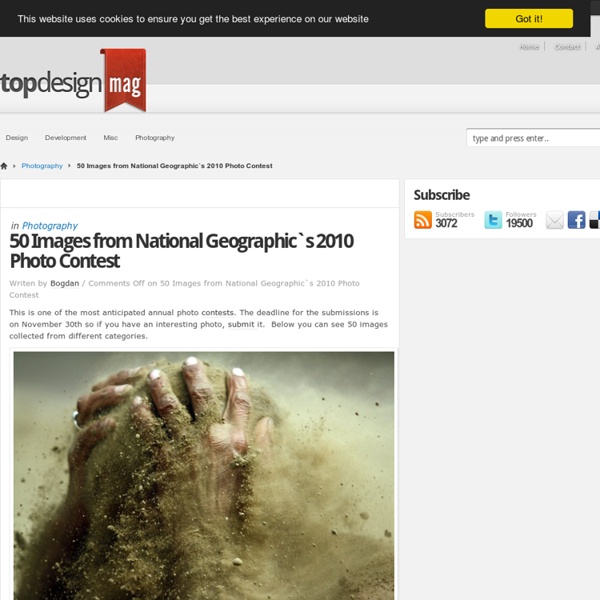 Writen by Bogdan / Comments Off on 50 Images from National Geographic`s 2010 Photo Contest This is one of the most anticipated annual photo contests. The deadline for the submissions is on November 30th so if you have an interesting photo, submit it. Below you can see 50 images collected from different categories. An Indian wrestler smears mud on his head before starting wrestling in Kolkata, India, March 30, 2010. Wrestling is one of the oldest sports in India. A supercell thunderstorm rolls across the Montana prairie at sunset. Freediver waiting over 800 ft of water for something substantial to come up from the depths. The Great Pyramids. The Music Of Love. Liquid Planet. Brown bear, Buskin River, Kodiak Alaska. Fleet week 2010, standing on Alcatraz island as the Blue angels fly over head. A Wrinkle in Time. This picture was taken in Suradita Village, West Java, Indonesia (2010). Cosmic. The child in us. Cloud and ship. After the Crash. Giraffes at Savannah. eavy load. Ki Gompa.

National Geographic Photo Contest 2011 National Geographic is currently holding its annual photo contest, with the deadline for submissions coming up on November 30. For the past nine weeks, the society has been gathering and presenting galleries of submissions, encouraging readers to vote for them as well. National Geographic was kind enough to let me choose among its entries from 2011 for display here on In Focus. Gathered below are 45 images from the three categories of People, Places, and Nature, with captions written by the individual photographers. [45 photos] Use j/k keys or ←/→ to navigate Choose: Gakuranman - illuminating Japan - StumbleUpon The ruins and haikyo aficionado in me couldn’t resist making a post about Tokyo Genso‘s fabulous art depicting post-apocalyptic Japan. The illustrations have a breathtaking otherworldly quality that perfectly capture the sort of scenes I regularly come across while exploring ruins, albeit of course, on a much grander and majestic scale. Some of the scenes really aren’t stretching the truth that much either. Head into the backstreets of Japan and you’ll quickly find dilapidated old buildings and creeping plants reclaiming man-made structures for mother nature. Apply that to the iconic landmarks of central Tokyo and other areas of Japan, and you have some gorgeous concept art for what Tokyo could look like if man were wiped from the planet. Anyway, enough talk.

Miniature People in Shocking Scenes Hazardous Material What kind of misery and chaos have the miniature people gotten themselves into? San Diego-based artist Enomeks has that answer. He's come upon four different yet very dramatic scenes. A hazmat team has been deployed to check out some foreign, fuming material.

Top 20 Real Pictures Made Famous by the Internet - StumbleUpon Pop Culture With the current expansion of Photoshop, it can be difficult to determine if a picture posted online is real or fake. Every year hundreds of photographs become viral on the Internet, and in most cases we have an opinion over their authenticity. This article will examine 20 real pictures that were made famous by the Internet. In most cases, the photos have caused an Internet debate over their origin.

25 Awesome Examples Of Extreme Photography I’m not an extreme sport passionate and when I’m looking at these photos I’m wondering what these people have in mind? Surely nothing related to safety. For example, take a look at the free climbing guys. National Geographic Photo Contest 2012, Part II The deadline to enter this year's National Geographic photo contest is coming up -- this Friday, November 30. Back in September, the society started gathering and presenting galleries of submissions, encouraging readers to vote for them as well. Winners will be chosen on or around December 15, 2012. National Geographic was once more kind enough to let me choose some of its entries for 2012 to feature here on In Focus. Awesome Photographs of Italy www.incrediblesnaps.com is coming up with awesome photographs of Italy. Italy is located in Southern Europe. Italy is one of the most developed country and the citizens enjoy very high standard lifestyle. Italian is an official language of Italy’s Roman Catholicism is largest religion in the country, although the Catholic Church is no longer officially the state religion. But Italians identify themselves as Roman Catholic.

We Danced On The Moon Brad and I drove to the Salt Flats. I had never been before. We made an adventure out of it. We stopped and looked for ghost towns. Creepy, Crusty, Crumbling: Illegal Tour of Abandoned Six Flags New Orleans [75 Pics] Hurricane Katrina killed this clown. According to the photographer, “An abandoned Six Flags amusement park, someone spray painted ‘Six Flags 2012 coming soon’ on the wall above the downed head. But they were clownin.’ Six Flags will never rebuild here.” Sharpest Views of the Cosmos Ever A close-up of the central region of the Orion nebula, taken with the Schulman Telescope at the Mount Lemmon SkyCenter. Credit: Adam Block/UA SkyCenter) Astronomers have built a new astro-camera that, when fitted onto the largest observatories on Earth, can snap photos of the universe twice as sharp as the famed Hubble Space Telescope.

50 Years Ago: The World in 1961 - Alan Taylor - In Focus A half-century ago, much of the world was in a broad state of change: We were moving out of the post-World War II era, and into both the Cold War and the Space Age, with broadening civil rights movements and anti-nuclear protests in the U.S. In 1961, John F. Kennedy was inaugurated as the 35th president of the United States, Soviet cosmonaut Yuri Gagarin became the first human to fly in space, Freedom Riders took buses into the South to bravely challenge segregation, and East Germany began construction of the Berlin Wall. That year, Kennedy gave the okay to the disastrous Bay of Pigs Invasion into Cuba and committed the U.S. to "landing a man on the Moon" with NASA's Apollo program. JFK also oversaw the early buildup of a U.S. military presence in Vietnam: by the end of 1961, some 2,000 troops were deployed there. Let me take you 50 years into the past now, for a look at the world as it was in 1961. [50 photos]

Microscopic Images of Alcoholic Drinks All of these impressive photos of alcoholic beverages under a microscope uncover the elements that make up some of our preferred tipples. Similar to photos of snowflakes, each and every beverage is unique, while observed below when zoomed about 1, 000 times under a high tech lab microscope. Created by United States company Bevshots, these are available as artworks for potential buyers which recognize the concealed beauty of alcoholic beverages. Catching the small elements that define most popular drinks such as vodka, pina colada and Chablis.