Sculptures Popping Out of Paintings 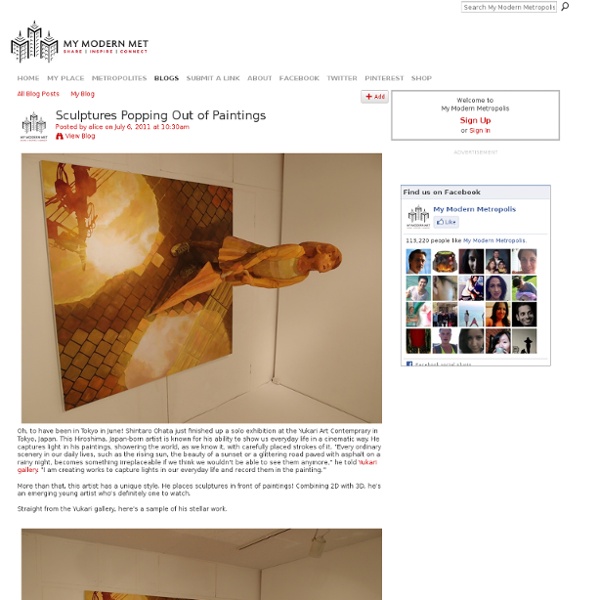 Oh, to have been in Tokyo in June! Shintaro Ohata just finished up a solo exhibition at the Yukari Art Contemprary in Tokyo, Japan. This Hiroshima, Japan-born artist is known for his ability to show us everyday life in a cinematic way. He captures light in his paintings, showering the world, as we know it, with carefully placed strokes of it. "Every ordinary scenery in our daily lives, such as the rising sun, the beauty of a sunset or a glittering road paved with asphalt on a rainy night, becomes something irreplaceable if we think we wouldn’t be able to see them anymore," he told Yukari gallery. "I am creating works to capture lights in our everyday life and record them in the painting.” More than that, this artist has a unique style. Straight from the Yukari gallery, here's a sample of his stellar work. ' Photos courtesy of Yukari Art Contemporary.

Ethereal Digital Paintings Capture The Look Of Loneliness Loneliness never looked so depressingly good. Variations of glittered deformations form the basis for a grotesquely beautiful motif in the works of Japanese artist 非(xhxix). Digitally sketching, drawing, and painting everything using Photoshop alone, 非 visualizes loneliness in his subjects and decorates them with scars, layers of geometric abstractions and floral imagery. As most of his subjects are young men, the artist explains that “boys are more suitable to express loneliness as women are emotional and powerful.” Concocting images of isolated pain and an ethereal sadness into haunting depictions of young western men, 非 reveals a mystified insight into the depths of the Japanese psyche.

Make a Ringlet T-shirt Scarf for Fall This little ringlet scarf made out of old t-shirts is so fun for fall! There’s no sewing involved (hallelujah!), and you can make it while sitting in front of the TV in less time than it takes to watch a really good, trashy show on E. Yarn Bombing / Guerrilla Crochet – A Collection More info. More info. More info. More Yarn Bombing and Guerrilla Crochet: 1) B-Arbeiten 2) Agata Olek 3) Yarnbombing 4) Stickkontakt Leave a reply SOFEX: The Business of War - Part 1 The Dillon Aero M134D Gatling Gun, a “six-barreled, electrically driven machine gun chambered in 7.62mm NATO that fires at a fixed rate of 3,000 shots per minute.” It was one of countless killing machines featured at SOFEX. Photo courtesy of Dillon Aero.

Jellyfish-like Bowls Photos: Gülnur Özdağlar Plastic bottles -- that environmental bane of a disposable, modern society -- can be both an abundant form of pollution in waterways and oceans, as well as a materials source for mind-boggling art. In the skillful hands of Turkish architect and upcycling designer Gülnur Özdağlar the unremarkable PET plastic bottle is transformed into gorgeously diaphanous and functional objects like bowls and jewelry. Using simple tools like a candle, scissors and a soldering iron, Özdağlar upcycles bottles into a bewildering range of ephemeral accessories that under the light, look like fantastical, tentacled sea creatures or little undersea treasures.

Chan Hwee Chong Makes Spiral Illustrations with a Single Line In one of the most impressive advertising ideas I have ever seen, Singapore-based art director and designer Chan Hwee Chong uses a single long line to create spiral recreations of famous artworks. In an inspired advertising campaign for Faber-Castell, designer Chan Hwee Chong demonstrates his unbelievable talent by creating spiral illustrations inspired by some of the most popular masterpieces in history. Using the above mentioned company’s pens, he starts with a blank canvas, and by drawing a continuous line in a spiral he somehow manages to make detailed reproductions of the famous works of art. The level of precision and control in Chong’s creations is simply amazing, and although I watched a short video of him in action, I’m still not sure how he manages to achieve such detailed reproductions with a single line. via Neatorama

Shakespeare Insult Kit Shakespeare Insult Kit Since 1996, the origin of this kit was listed as anonymous. It came to me on a piece of paper in the 90's with no attribution, and I thought it would make a cool web page. Though I searched for the origin, I could never find it. Japanese Dance Team Illuminates the Floor In TRON Suit Japanese dance crew , Wrecking Crew Orchestra got talent, Rock the floor in TRON-suit routine that is sure to make your day wow. This viral dance video shows you how LED lights with innovative control can amaze an audience. The song feature in the background is "Arena (2010 film)" from the Grammy Award-nominated soundtrack, "Tron: Legacy,". It also features music from award winning DJ/producer, David Guetta, French electro house duo, Justice, Italian DJ/producers, Crookers and English dubstep DJ/producer, Flux Pavilion. This eight-man dance team is able to control light, perform tricks and choreography without ever missing a beat. The wireless suits are controlled and the routine includes a mix of stop-motion animation, ripple effects and that leave that audience in wowing moment.

Skateboard Sculpture Now that’s a sick madness! If you have never heard about Japanese wood sculptor named Haroshi, go get the wind of his most original conceptual art. As a creator of amazingly beautiful wooden sculptures out of old, crashed and broken skateboard decks, Haroshi passed for a man of considerable resourcefulness. His multicolored and meticulously sculpted art pieces simply astound with lifelike affinity, so in whichever way it’s even possible to mistake them for being real! In his works he stacks many layers with all piece elements being connected either in their original form or in shapes to form wooden mosaic, dots, and pixels. After that they’re cut down to size, shaven to get rid of the debris, and afterwards coated with a final glossy finish.

20 Amazing Watercolor Masterpieces This is the first of its kind post on Designzzz. The reason this subject of watercolor paintings is selected because these paintings cannot carry as much detail as other routine oil or digital paintings. That is due to the fact that watercolours are not that sophisticated with gradients and swirls. This aspect makes it the most aspiring brand of art, hence we are sharing a collection 20 watercolor paintings from all over the internet.

Homemade Light Box for Product Photography & StudioLighting.net The object of product photography is to show details of an object clearly. Lighting an object well brings out details and provides pleasing highlights. One method for uniformly lighting small objects is to surround the object in a light box. The following article describes the process for making your own lightbox for small object photography. From start to finish this project should take no longer than 30 minutes. Experiment with Nature Definition: Refraction : re·frac·tion – [ri-frak-shuhn] The change of direction of a ray of light in passing obliquely from one medium into another in which its wave velocity is different Markus Reugels of Deutschland uses the properties of refraction to create beautiful miniature worlds inside drops of water. Check out more of his work at: flickr.com/photos/maianer

081810 WIP 081810 WIP - ink, watercolor and gouache on paper Artwork © Lawrence Yang 2010 my blog | my site | purchase inquiries We Are All Part of the Same Thing Australian artist Dominique Falla created this fantastic thread and nail poster as an entry for this year’s Positive Posters competition. It”s beautiful and wh o doesn”t love rainbow colors? “For too long, people have viewed themselves as separate and I wanted to represent a multitude of individuals using the nails, and then coloured string to show how we are all interconnected, and that together, we can

Thanks for sharing this great pearl. by tweedledum Jun 7