With a Passion for Skateboarding: Creative Art Sculptures by Haroshi 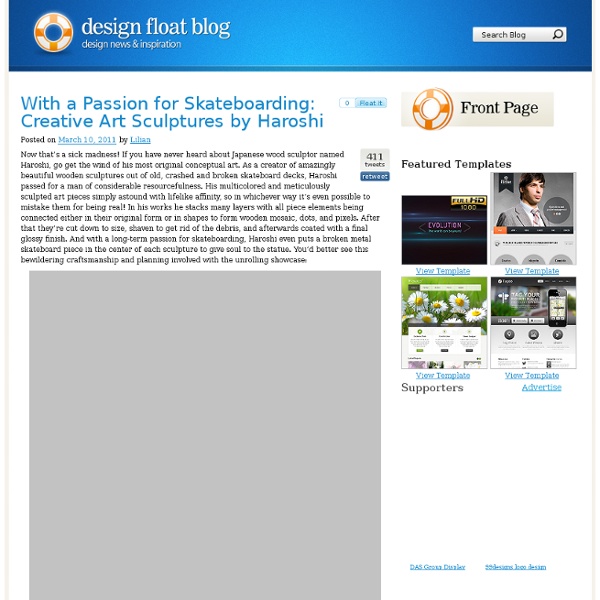 Jellyfish-like Bowls Photos: Gülnur Özdağlar Plastic bottles -- that environmental bane of a disposable, modern society -- can be both an abundant form of pollution in waterways and oceans, as well as a materials source for mind-boggling art. In the skillful hands of Turkish architect and upcycling designer Gülnur Özdağlar the unremarkable PET plastic bottle is transformed into gorgeously diaphanous and functional objects like bowls and jewelry. Using simple tools like a candle, scissors and a soldering iron, Özdağlar upcycles bottles into a bewildering range of ephemeral accessories that under the light, look like fantastical, tentacled sea creatures or little undersea treasures. So from this:

Cartoon characters cut on paper Home » Artwork There are interesting photos in this post made by some genius Cartoon fans. They drew the cartoon character on paper, cut them out and then put them in different scenesâ¦. 20 Amazing Artist-Inspired Tattoos [Editor's note: While your Flavorwire editors take a much-needed holiday break, we're revisiting some of our most popular features of the year. This post was originally published February 16, 2011.] If we’re being honest, most of us will never own a work of art by a famous artist. And while back in college, it might have been okay to pay homage to one of the greats with a poster print from the museum, these days when it comes to the artwork that hangs on our walls, we tend to opt for original pieces by emerging (read: more affordable) talents. A few enterprising souls have found a way to sidestep the issue completely by displaying famous works of art directly on their bodies.

Fascinating Lamps by Calabarte Calabarte is the pseudonym of a Polish artist named Przemek Krawczynski, whose art takes on a peculiar but incredibly beautiful form: cool lamps. The name itself is a portmanteau of two words – art (obviously), and calabash, the fruit that carries his imagination. The calabash is a bottle gourd originating in India, although Calabarte gets his supply from Senegal. Due to ancient domestication and usage, the bottle gourd has an incredibly tough outer shell. In the past, the gourd’s usage was defined mostly as a water container, due to having a tough, smooth shell with an ergonomic shape for handling, and natural buoyancy on water.

Rainbow Melted Crayon Art Artist and designer Jessica Kerbawy creates these amazing rainbow wall art pieces by gluing a spectrum of crayons on foam core, and then strategically melting them with a heat gun. The paper wrappers are left atop, with the remains of the colored wax dripping down. Though it may look like something you've seen before, I find these to be pretty clever and unique, and an update on the playing with melted wax and rainbow techniques. Jessica's prices are actually incredibly reasonable, between $25 and $75 depending on the size. But, it's also something you could try yourself, especially now that it's back-to-school season, and large boxes of crayons will be on sale. Check them out at JKCreative's Etsy Shop

15 awesome illustrators you should know is really impressive to see how many talented illustrators there are out there, sharing their work on the Internet. For your inspiration, I have compiled a list of 15 illustrators that rock. 1. Tang Yau Hoong 2. Iain MacArthur Q&A with Blake Boston (Scumbag Steve) Disclaimer: This article contains explicit language! In the past week, we’ve been talking over e-mails with Blake Boston, also known as Scumbag Steve on the Internets. Based on a Myspace picture of Blake taken circa 2006, the image macro series quickly thrived into everyone’s favorite joke about “that guy” who’s fading away in our memories of high school years, still blasting that mix CD out of his souped up Honda in school parking lot (even though he was expelled years ago).

Yarn Bombing / Guerrilla Crochet – A Collection More info. More info. More info. More Yarn Bombing and Guerrilla Crochet: 1) B-Arbeiten 2) Agata Olek 3) Yarnbombing 4) Stickkontakt Leave a reply Related posts Creepy, Crusty, Crumbling: Illegal Tour of Abandoned Six Flags New Orleans ... Hurricane Katrina killed this clown. According to the photographer, “An abandoned Six Flags amusement park, someone spray painted ‘Six Flags 2012 coming soon’ on the wall above the downed head. But they were clownin.’ Six Flags will never rebuild here.” That’s sad, but much of New Orleans has not been restored to her former glory. This defunct amusement park on the cityâ€™s eastern edge must surely serve as a constant reminder that Katrina tried to wash them off the map.

Bridging time in a bottle: 5-year-old's note surfaces after 24 years Viktor Guseinov / AP In this Friday, March 11 photo, Daniil Korotkikh holds a bottle with a letter he found on a beach at the village of Morskoye on the Curonian Spit, 80 km (50 miles) northwest of Kaliningrad, Russia. The 13-year-old Russian, was walking with his parents on a beach when he saw something glittering lying in the sand. It was a bottle with a letter sent by German boy 24 years ago in the Baltic Sea. By Jim Seida Stone fields by Novastructura This project has started from a search for a 3d-objects optimal packing algorithm over a surface, but evolved in something rather different. I love the work by Richard Long, the way he fills lonely landscapes with arcaic stones patterns. My version is a poor and lazy version of that eroic approach.. The virtual stones created by several fractal subdivision strategies, find their proper position within the circle, with a trial and error hierarchical algorythm. A mix of attractors and scalar fields (some withPerlin noise) drives the density and size of the stones.