Proudhon's Libertarian Thought and the Anarchist Movement by L. Gambone. By L. 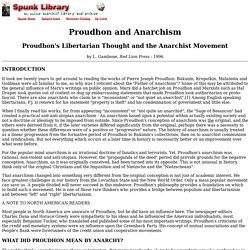 Gambone, Red Lion Press - 1996 It took me twenty years to get around to reading the works of Pierre Joseph Proudhon. Bakunin, Kropotkin, Malatesta and Goldman were all familiar to me, so why was I reticent about the "Father of Anarchism"? Some of this may be attributed to the general influence of Marx's writings on public opinion. Marx did a hatchet job on Proudhon and Marxists such as Hal Draper took quotes out of context or dug up embarrassing statements that made Proudhon look authoritarian or proto-fascist. When I finally read his works, far from appearing "inconsistent" or "not quite an anarchist", the "Sage of Besancon" had created a practical and anti-utopian anarchism - An anarchism based upon a potential within actually existing society and not a doctrine or ideology to be imposed from outside.

For the popular mind anarchism is an irrational doctrine of fanatics and terrorists. Most people in North America are unaware of Proudhon, but he did have an influence here. 1. 2. Mikhail Aleksandrovich Bakunin. Mikhail Aleksandrovich Bakunin, (born May 30 [May 18, Old Style], 1814, Premukhino, Russia—died July 1 [June 19], 1876, Bern, Switzerland), chief propagator of 19th-century anarchism, a prominent Russian revolutionary agitator, and a prolific political writer. 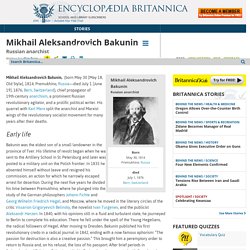 His quarrel with Karl Marx split the anarchist and Marxist wings of the revolutionary socialist movement for many years after their deaths. Early life Bakunin was the eldest son of a small landowner in the province of Tver. His lifetime of revolt began when he was sent to the Artillery School in St. Petersburg and later was posted to a military unit on the Polish frontier. Kropotkin and His Theory of Mutual Aid - cooperation, Huxley, Darwin, cooperative communities, guilds, Hobbes. Peter Kropotkin Peter Kropotkin (1842-1921) was a Russian prince, geographer, and self-proclaimed anarchist, who gave up wealth and a privileged lifestyle in exchange for one of scientific discovery and political activism. 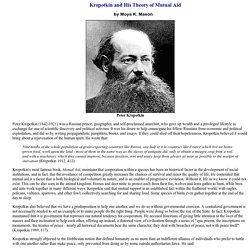 It was his desire to help emancipate his fellow Russians from economic and political exploitation, and did so by writing propagandistic pamphlets, books, and essays. If they could shed off their hopelessness, Kropotkin believed it would bring about a rejuvenation of the human spirit. He wrote that: Nine-tenths of the whole population of grain-exporting countries like Russia, one-half of it in countries like France which live on home grown food, work upon the land - most of them in the same way as the slaves of antiquity did, only to obtain a meagre crop from a soil, and with a machinery which they cannot improve, because taxation, rent and usury keep them always as near as possible to the margin of starvation (Kropotkin 1912, 412).

The naturalist, Thomas H. Bibliography. Anarchism in the United States. Anarchism in the United States began as an individualist anarchist philosophy in the mid 19th century and started to grow in influence as it entered the American labor movements, growing an anarcho-communist current as well as gaining notoriety for violent propaganda by the deed and campaigning for diverse social reforms in the early 20th century. 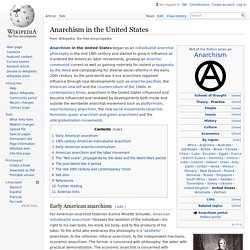 As the post-world war II era anarchism regained influence through new developments such as anarcho-pacifism, the American new left and the counterculture of the 1960s. In contemporary times, anarchism in the United States influenced and became influenced and renewed by developments both inside and outside the worldwide anarchist movement such as platformism, insurrectionary anarchism, the new social movements (anarcha-feminism, queer anarchism and green anarchism) and the alterglobalization movements. Early American anarchism[edit] 19th-century American individualist anarchism[edit] M. Early American anarcho-communism[edit] List of anarchists. Famous Figures and Anarchism by max & ed.

Anarchism doesn’t have much credit within mainstream media or politics. 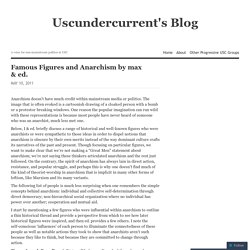 The image that is often evoked is a cartoonish drawing of a cloaked person with a bomb or a protestor breaking windows. One reason the popular imagination can run wild with these representations is because most people have never heard of someone who was an anarchist, much less met one. Below, I & ed. briefly discuss a range of historical and well-known figures who were anarchists or were sympathetic to those ideas in order to dispel notions that anarchism is obscure by their own merits instead of the way dominant culture crafts its narratives of the past and present. Though focusing on particular figures, we want to make clear that we’re not making a “Great Men” statement about anarchism; we’re not saying these thinkers articulated anarchism and the rest just followed. Pierre-Joseph Proudhon (1809 – 1865) was a French philosopher and politician who was the first person to start calling himself an anarchist.