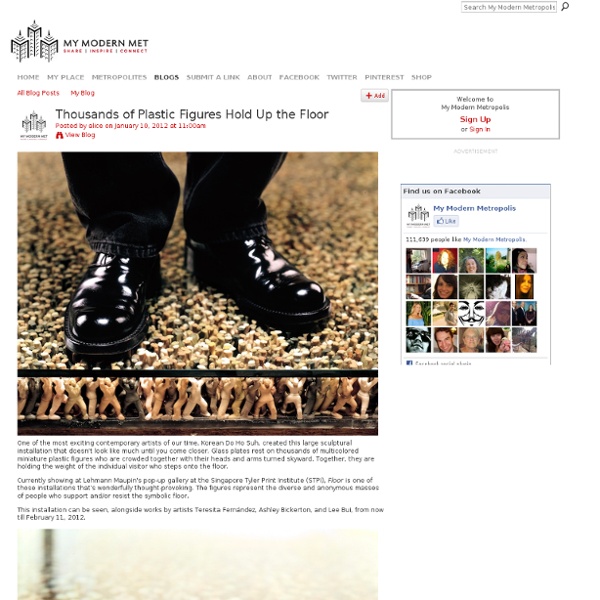 One of the most exciting contemporary artists of our time, Korean Do Ho Suh, created this large sculptural installation that doesn't look like much until you come closer. Glass plates rest on thousands of multicolored miniature plastic figures who are crowded together with their heads and arms turned skyward. Together, they are holding the weight of the individual visitor who steps onto the floor. Currently showing at Lehmann Maupin's pop-up gallery at the Singapore Tyler Print Institute (STPI), Floor is one of those installations that's wonderfully thought-provoking. This installation can be seen, alongside works by artists Teresita Fernández, Ashley Bickerton, and Lee Bui, from now till February 11, 2012. DO HO SUH Floor, 1997-2000 Installation at Lehmann Maupin Gallery, New York PVC Figures, Glass Plates, Phenolic Sheets, Polyurethane Resin 40 parts each: 39.37 x 39.37 x 3.15 inches 100 x 100 x 8 cm Courtesy the artist and Lehmann Maupin Gallery, New York Lehmann Maupin Gallery website Related:  Sculptures & Figures

Shintaro Ohata Creates Sculptures Popping Out of Paintings Oh, to have been in Tokyo in June! Shintaro Ohata just finished up a solo exhibition at the Yukari Art Contemprary in Tokyo, Japan. This Hiroshima, Japan-born artist is known for his ability to show us everyday life in a cinematic way. He captures light in his paintings, showering the world, as we know it, with carefully placed strokes of it. "Every ordinary scenery in our daily lives, such as the rising sun, the beauty of a sunset or a glittering road paved with asphalt on a rainy night, becomes something irreplaceable if we think we wouldn’t be able to see them anymore," he told Yukari gallery. More than that, this artist has a unique style. Straight from the Yukari gallery, here's a sample of his stellar work. ' Photos courtesy of Yukari Art Contemporary.

Takashi Murakami Installation at Versailles (2010) sep 20, 2010 takashi murakami at versailles ‘oval buddha’ by takashi murakami, 2007-2010 (bronze and gold leaf) ©2007-2010 takashi murakami/kaikai kiki co., ltd. all rights reserved. photo: cedric delsaux – water parterre / château de versailles the château de versailles is the location of the latest exhibition by japanese artist takashi murakami. the show is titled ‘murakami versailles’ and features a number of manga-inspired sculptures displayed both indoors and out at the historic french palace. of the 22 works on display, 11 were created specifically for this show. all the murakami works sit within the context of the palace, often contrasting sharply with the period décor and complimenting it at other times. the show will run from now till december 12th as part of the regular versailles admission. nate archer I designboom

"Anamorphic Sculptures" series by Jonty Hurwitz London-based artist Jonty Hurwitz creates ‘Anamorphic Sculptures’ which only reveal themselves once facing a reflective cylinder. Hurwitz took an engineering degree in Johannesburg where he discovered the fine line between art and science. He has lived in England for many years, working in the online industry though he quietly levitated into the world of art inspired by a need to make ‘something real’. All images © Niina Keks, Otto Pierotto, Richard Ivey Installation Art Out of all the different types of art forms we write about on a daily basis, there's one that clearly stands apart from the rest - installation. According to Merriam-Webster, an installation is defined as "a work of art that usually consists of multiple components often in mixed media and that is exhibited in a usually large space in an arrangement specified by the artist." Why do we love installation art? Today, we take a look at the most stunning installations that were shown around the world in 2013. 10. In July, the city of Agueda, Portugal came alive as a colorful canopies of umbrellas hung over its streets. 9. From the Knees of My Nose to the Belly of My Toes is a surreal display by British designer Alex Chinneck that makes it look like the brick facade is sliding right off the front of a building in Margate, England. 8. 7. At the Rice University Art Gallery at Houston, Texas, visitors were immersed in a shimmering world of light, shadow and color. 6. 5. 4. 3. 2. 1.

“Porcelain Crustaceans” series by Mary O’Malley (2013) As if lifted from the wreckage of the Titanic, ceramic artist Mary O’Malley creates sculptural porcelain teapots, cups, and vases adorned with barnacles, tentacles, and other living sea creatures (she refers to them as “porcelain crustaceans”). Many original works from this series titled ‘Bottom Feeders’ are available over on Etsy. (via laughing squid) Felice Varini Projection Installation at The Grand Palais (2013) Gherm Swiss artist Felice Varini is know for his large scale projections of geometric forms onto rooms and exterior spaces. His latest work at the Grand Palais in Paris went up just last month, you can watch the video above to see how he works with projectors and stencils to create his artwork that only appears proportional when seen from a specific viewpoint. You can also follow him on Facebook .

Hyper-Realistic Wooden Sculptures by Tom Eckert Artist and Professor Tom Eckert uses traditional processes to carve these hyper-realistic sculptures of everyday objects entirely made of wood. He uses plenty of carpentry techniques in his creative sculptured pieces, such as constructing, bending, laminating, carving and painting. After receiving his M.F.A. degree from Arizona State University, Eckert began teaching at the university. He has exhibited his work in over 150 national and international exhibitions. For more details about his work please visit Eckert’s website www.tomeckertart.com

Serge Salat "Beyond Infinity" Installation (2011) sep 16, 2011 serge salat: beyond infinity immersive installation ‘beyond infinity’, an immersive installation by french artist and theorist serge salat ‘beyond infinity’, a multisensory installation by french artist and theorist serge salat, interweaves mirrors, light, music, and fractal art in an architecture that conflates visitors’ perceptions of space. sponsored by buick cars and usable during the events as a vehicle showroom, the work is installed at shanghai’s westgate mall from september 16th through 18th, 2011. measuring 12.45 by 10.8 meters at a height of 3.8 meters, the structure is completely closed, composed of a steel infrastructure with honeycomb aluminum panels covered in mirrors. view looking into the third ‘room’ in the sequence: the circular and triangular infinite staircases the ‘infinite fault’ when exiting from the red grid the ‘hyper cross’, the fifth ‘room’ architectural plan process photograph: assembling the staircases video tour through the space