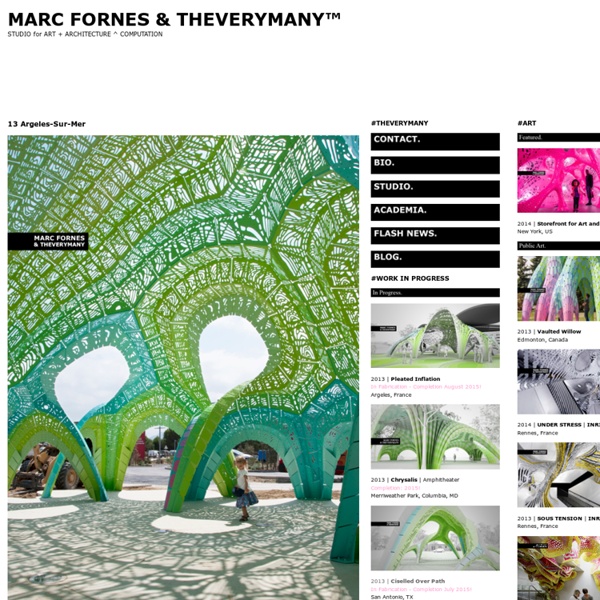 Forms in Nature Forms in Nature The Light sculpture Forms in Nature resembles Darwinist Ernst Haeckel’s drawings . Using a simple action, such as intensifying the brightness at the center of the artwork, the light transforms the space and adds character, as the work throws oversized shadows onto walls and ceilings in the space in which it hangs. Scripting Posts Tagged ‘Scripting’ Shellstar Pavilion Date: 2012Size: 8m x 8m x 3mMaterials: 4mm Translucent Coroplast, Nylon Cable Ties, Steel Foundations, PVC and Steel Reinforcement ArchesTools: Rhino, Grasshopper, Kangaroo, Python, Lunchbox, RhinoscriptLocation: Wan Chai, Hong KongEvent: Detour 2012 Description: Shellstar is a lightweight temporary pavilion that maximizes its spatial performance while minimizing structure and material. Commissioned for Detour, an art and design festival in Hong Kong in December 2012, the pavilion was designed to be an iconic gathering place for the festival attendees.

Contacts-rat[LAB] Looking for Visionaries, Designers, Researchers, Programmers & Collaborators to join our team rat[LAB] is looking for people with a creative and futuristic outset who would like to be associated with a multi-national and specialized group of designers, researchers and programmers from various parts of the world. We are also accepting potential research proposals in design and computation for collaborations and workshops. Looking for Research & Workshop Collaborators We are seeking collaborations from research groups and organizations in all areas related to design & computation for research opportunities and funding options to carry out advanced research with our multi-disciplinary team.

synth-e-tech carnovsky ex For info and pricing please contact: carnovsky@carnovsky.com Download Pdf catalog of RGB wallpapers 2013 (17,6 Mb) Sacred Space: New Technological Mandalas by Leonardo Ulian London-based artist Leonardo Ulian (previously) has completed a new body of work titled Sacred Space. Inspired by Hindu and Buddhist symbolism, Ulian continues his exploration of technology and spiritualism with these carefully sculpted mandalas created with soldered computer and radio components. Via Beers.Lambert: Ulian’s reflexive use of the geometrical mandala can also be seen as a nod to his ‘past-life’ as an technican, but through his application, Ulian divorces the electronic components from their origins, giving new life to these (now defunct) technological bits, creating a new type of hybridization that is equal parts spiritualization and contemporary critique: “We live in a society that worships electronic technology,” he states “both for necessity but also because it makes us feel better, not unlike its own new form of fashionable spirituality.”

Anthony Howe's Kinetic Wind Sculptures Pulse And Hypnotize The Creators Project linked up with Anthony Howe, an Eastsound, WA-based painter and sculpture artist to highlight his work in the medium of surreal kinetic wind sculpture that are initially designed in 3D software. "I was bored with everything being static in my visual world," Howe told us. In other words, he believes sculptures don't have to be stoic designs that are lifeless. Howe creates art that lives and moves with nature, and his metal cut-outs give the impression of dancing, real-world screensavers. The artist walked us through the workflow of how his pieces go from 3D models that he designs on his desktop to CAD designs made through Rhinoceros 3D. These designs are then laser cut using a plasma cutter before he meticulously crafts the structures using traditional metal work processes.

Variable 4 Variable 4 is an outdoor sound installation that translates weather conditions into musical patterns in real time. Using meteorological sensors connected to a custom software environment, the weather itself acts as conductor, navigating through a map of twenty-four specifically-written movements. Every aspect of the piece, from broad harmonic progressions down to individual notes and timbres, is influenced by changes in the environment: wind speed, rainfall, solar radiation, humidity, tropospheric variance, temperature, and more. The resultant composition is performed over an indeterminate duration through eight loudspeakers integrated into the landscape.

A Super-Sized Cocoon Made of Packing Tape That You Can Curl Up In Numen/For Use's tape installations are like a massive cocoon humans can crawl through. Numen/For Use They create the pieces by wrapping tape around pre-existing architectural elements. From there, it’s really just a matter of following the natural pattern of the space. They use a wider form of packaging tape.

Vocal Vibrations: Expressive Performance for Body-Mind Wellbeing Tod Machover, Charles Holbrow, Elena Jessop, and Rebecca Kleinberger. Vocal Vibrations explores the relationships between human physiology and the resonant vibrations of the voice. The voice is an instrument everyone possesses. It is incredibly individual, infinitely expressive, and intimately linked to the physical form. Stefan Tiefengraber 2013 - interactive installation exhibited: from 30.01.2014 - at the TIME OUT .01 exhibition ARS ELECTRONICA CENTER Linz/Austria. from 21.11. to 24.11.2013 - PIKSEL Festival 2013 - Bergen/Norway from 30.05. to 09.06.2013 - TO WHOM IT MAY CONCERN - Exhibition - 175 Gallery Seoul/Korea Visitors of the website www.ugsd.net can trigger six hammers and drop them onto a server that is located in the exhibition.