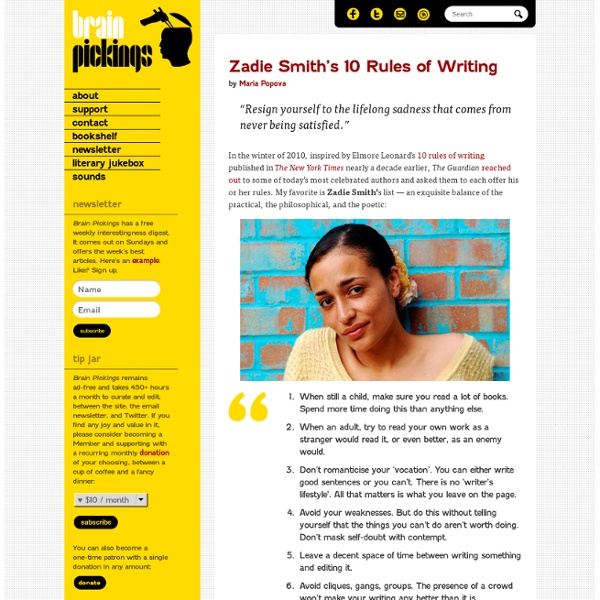 by Maria Popova “Resign yourself to the lifelong sadness that comes from never ­being satisfied.” In the winter of 2010, inspired by Elmore Leonard’s 10 rules of writing published in The New York Times nearly a decade earlier, The Guardian reached out to some of today’s most celebrated authors and asked them to each offer his or her rules. My favorite is Zadie Smith’s list — an exquisite balance of the practical, the philosophical, and the poetic: When still a child, make sure you read a lot of books. Spend more time doing this than anything else.When an adult, try to read your own work as a stranger would read it, or even better, as an enemy would.Don’t romanticise your ‘vocation’. What a fine addition to famous writers’ timeless wisdom on the craft, including Kurt Vonnegut’s 8 rules for a great story, David Ogilvy’s 10 no-bullshit tips, Henry Miller’s 11 commandments, Jack Kerouac’s 30 beliefs and techniques, John Steinbeck’s 6 pointers, and Susan Sontag’s synthesized learnings.

a-highly-unlikely-scenario-by-rachel-cantor In a not-too-distant future, in a world much like our own, a young man sits in a white room, answering a white phone, listening. In his world, fast-food chains and political philosophies are one. Jack-o-Bites chefs and Whiggery Piggery employees brawl with kebab sticks in the public square, and neo-Baconians keep safe houses to protect themselves from the Cathars at the Strawberry Parfait. 5 Freewriting Secrets for Being a "Genius" You've heard of freewriting, certainly. At its most basic, it's about forcing your internal editor to stay away while you splash your most raw and unusual thoughts onto the page. In Accidental Genius: Using Writing to Generate Your Best Ideas, Insights, and Content (2nd edition, revised & updated), Mark Levy tells how he uses freewriting, not only to loosen up his writing muscles, but to solve business problems of all kinds. Levy, author, writing teacher, and marketing strategist, shares a few "secrets" for making freewriting an indispensible tool: 5 Freewriting Tips

Neil Gaiman's 8 Rules of Writing By Maria Popova In the winter of 2010, inspired by Elmore Leonard’s 10 rules of writing published in The New York Times nearly a decade earlier, The Guardian reached out to some of today’s most celebrated authors and asked them to each offer his or her commandments. After Zadie Smith’s 10 rules of writing, here come 8 from the one and only Neil Gaiman:

50 Excellent Writing Exercises to Cultivate Your Creativity & Craft If you’re a good writer, you can succeed in any industry, no matter what kind of online degree you have. But even great writers sometimes have trouble organizing their work, polishing up the details, or even picking a cohesive idea to write about. Here are 50 excellent writing exercises to help cultivate your creativity and craft, from brainstorming to beating writer’s block and remembering your motivation. Brainstorming and Organization

10 tips for editing video in a thoughtful, compelling way By Kari Mulholland One of TED’s video editors, Kari Mulholland, hard at work. Below, her editing advice. Photo: Biljana Labovic The techniques that video editors use to shape their content reveal a lot about how people create meaning in the world. The Case for Preserving the Pleasure of Deep Reading When a minaret dating from the twelfth century was toppled in the fighting between rebels and government forces in Aleppo, Syria, earlier this spring, we recognized that more than a building had been lost. The destruction of irreplaceable artifacts—like the massive Buddha statues dynamited in the Bamiyan Valley in Afghanistan in 2001 and the ancient texts burned and looted in Iraq in 2003—leaves us less equipped to understand ourselves and where we came from, less able to enlarge ourselves with the awe and pleasure that these creations once evoked. Which is why we should care about the survival of a human treasure threatened right here at home: the deep reader. “Deep reading”—as opposed to the often superficial reading we do on the web—is an endangered practice, one we ought to take steps to preserve as we would a historic building or a significant work of art. None of this is likely to happen when we’re scrolling through TMZ.com.

Stephen King's Top 20 Rules for Writers Image by the USO, via Flickr Commons In one of my favorite Stephen King interviews, for The Atlantic, he talks at length about the vital importance of a good opening line. “There are all sorts of theories,” he says, “it’s a tricky thing.”

The Daily Routines of Famous Writers By Maria Popova UPDATE: These daily routines have now been adapted into a labor-of-love visualization of writers’ sleep habits vs. literary productivity. Kurt Vonnegut’s recently published daily routine made we wonder how other beloved writers organized their days. So I pored through various old diaries and interviews — many from the fantastic Paris Review archives — and culled a handful of writing routines from some of my favorite authors.

50 Most Challenging Words Back in 2010 The New York Times published a list of 50 fancy words that most frequently stump their readership. The New York Times 50 Fancy Words (defined and used) 10 top writing tips and the psychology behind them - without bullshit There are plenty of folks happy to tell you how to write better, just as any doctor will tell you to “eat right and exercise.” But changing your writing (or eating) habits only happens when you understand why you do what you do. I can help you with that. That proposal or email you wrote must now compete for attention with Facebook and the Huffington Post. Here’s how to compete more effectively, and why you’re not doing it already. (The wall chart for these is at the bottom of the post.)