The Eight Irresistible Principles of Fun 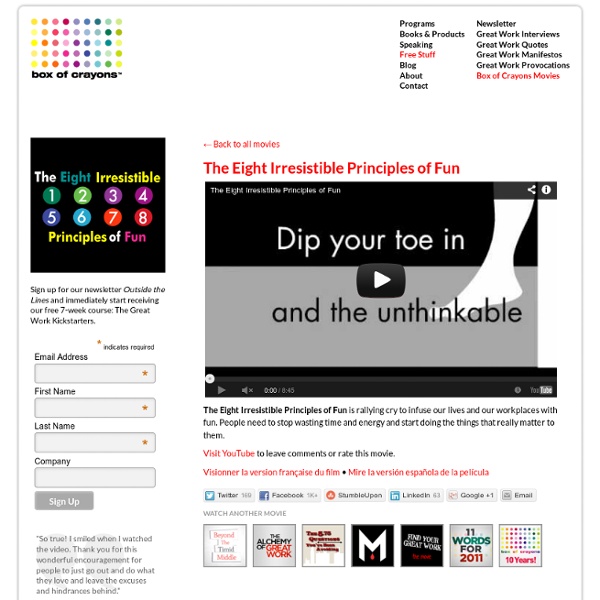 19 Climate Games That Could Change the Future By Climate Guest Contributor on March 10, 2012 at 10:28 am "19 Climate Games That Could Change the Future" by Ellie Johnston and Andrew Jones, reposted from Climate Interactive The prevalence of games in our culture provides an opportunity to increase the understanding of our global challenges. In 2008 the Pew Research Center estimated that over half of American adults played video games and 80% of young Americans play video games. 47 Mind-Blowing Psychological Facts You Should Know About Yourself I’ve decided to start a series called 100 Things You Should Know about People. As in: 100 things you should know if you are going to design an effective and persuasive website, web application or software application. Or maybe just 100 things that everyone should know about humans! The order that I’ll present these 100 things is going to be pretty random.

12 Critical Things You Should Never Tolerate There is so much in life that we just tolerate. Some of it we have to deal with (taxes, bad weather, traffic). But there’s a good portion of stuff that we tolerate even when we don’t have to. We step around things, overlook irritations, and mindlessly accept energy drains. Perhaps we’ve become so immune to these tolerations that we don’t recognize the negative impact they have on us.

v. ARG (feat. Transmedia) « ZED Project Journal ZED.TO was an 8-month narrative told in real-time through an integrated combination of interactive theatrical events and online content. It told the story of the beginning of the end of the world, from a viral pandemic created by ByoLogyc, a fictional Toronto-based biotech company. Winner of 2012 Digi Award for Cross-Platform Fiction Winner of 2012 Toronto Fringe Performance Innovation Award Winner of 2012 WorldFuture BetaLaunch Best in Show Winner of 2025 International Design Innovation Award "Crafted with obvious talent and energy, and if you’re willing to match even a fraction of said energy it promises to be a very fulfilling experience."

Understanding the 10 Most Destructive Human Behaviors by Live Science Staff | May 13, 2011 12:25pm ET Credit: © Fernando Gregory | Dreamstime.com Compared with most animals, we humans engage in a host of behaviors that are destructive to our own kind and to ourselves. We lie, cheat and steal, carve ornamentations into our own bodies, stress out and kill ourselves, and of course kill others. Science has provided much insight into why an intelligent species seems so nasty, spiteful, self-destructive and hurtful.

7 Lessons From 7 Great Minds Have you ever wished you could go back in time and have a conversation with one of the greatest minds in history? Well, you can’t sorry, they’re dead. Unless of course you’re clairaudient, be my guest. But for the rest of us, we can still refer to the words they left behind. Even though these great teachers have passed on, their words still live, and in them their wisdom. I’ve made a list of seven what I believe are some of the greatest teachings by the world’s greatest minds. Emerge attracts futurists to collaborate with scientists, designers artists is redesign of future Singular questions about what it means to be human in the face of emerging technologies will be explored March 1-3 when Arizona State University hosts Emerge. An unparalleled campus-wide collaboration, Emerge unites artists, engineers, bio scientists, social scientists, story tellers and designers to build, draw, write and rethink the future of the human species and the environments that we share. Leaders from industry and prominent authors and futurists will join ASU faculty and selected students for an intense exploration of emerging technology and the implications of those breakthroughs for people and environments. "This is a time for humanists, artists and designers to leave their ivory tower and seek to integrate their knowledge in interdisciplinary teams that design the future,'' said Professor Thanassis Rikakis, director of the ASU School of Arts, Media and Engineering in the Herberger Institute for Design and the Arts and one of the principal organizers of the event.

Tantra lovemaking positions, I When you play with different positions during lovemaking, you invite a whole spectrum of qualities into your union. Each posture will activate a different kind of response. The more expansive you can be with how you express your love, and the more dimensions you can include, the more spicy and fulfilling your relating will be. Instead of being one-dimensional, always moving into the same habits of behaviour, you will become multi-dimensional – able to access new and unexpected facets of your being.

Pranksters want debate on Hawaii's Chinatown Posted on: Monday, October 15, 2007 Pranksters want debate on Hawaii's Chinatown By Mary VorsinoAdvertiser Urban Honolulu Writer Coming soon to Chinatown: a Starbucks, TGI Friday's, American Apparel and luxury lofts priced at $2.5 million each? No, but that's what several signs announced earlier this month in what turned out to be a controversial campaign by two University of Hawai'i doctoral students to get Chinatown residents talking about their community's future.

I do not fear death Roger Ebert was always a great friend of Salon's. We're deeply saddened by reports of his death, and are re-printing this essay, from his book "Life Itself: A Memoir," which we think fans will take particular comfort in reading now. I know it is coming, and I do not fear it, because I believe there is nothing on the other side of death to fear. I hope to be spared as much pain as possible on the approach path. I was perfectly content before I was born, and I think of death as the same state.

10 Paradoxical Traits Of Creative People Editor's Note: This is one of the most-read leadership articles of 2013. Click here to see the full list. I frequently find myself thinking about whether I am an artist or an entrepreneur. I am simply trying my best to create my own unique path. It is safe to say that more and more entrepreneurs are artists, and artists of all kinds are entrepreneurs. And the trend is only on the rise as all things (art, science, technology, business, culture, spirituality) are increasingly converging.