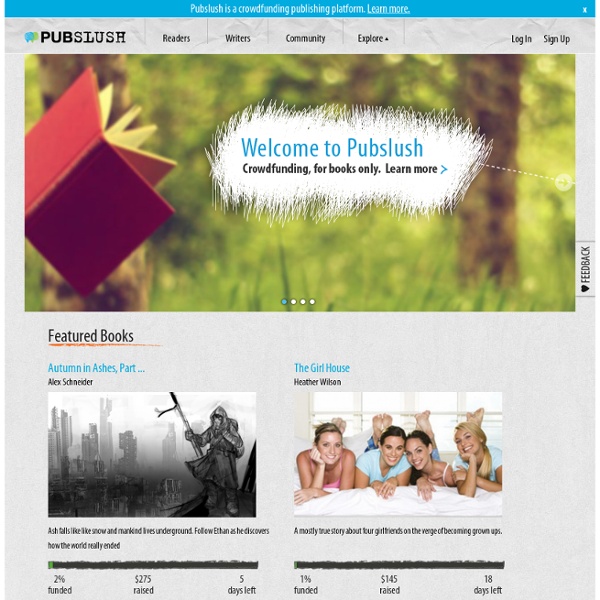 Publishing your own book: discover (you) writing talent | TenPages.com Ganxy offers an easier way to sell and market ebooks The problem that Ganxy solves should be a simple one: How can authors and publishers market and sell books directly online from one central hub? But this question hasn’t had a simple answer until now — partly because of the many ebook retailers out there, and partly because many publishers still don’t understand direct marketing. New York-based startup Ganxy provides an easy solution. Ganxy also allows authors and publishers to track where their sales are coming from. It’s free to create a showcase, but Ganxy makes money in two ways. Ganxy also wants to appeal to readers. So far, a few clients are using Ganxy in beta: Diversion Books (the publisher of Dallas Mavericks owner Mark Cuban and the Washington Post ebooks, among others), romance author Barbara Freethy (who’s achieved huge success self-publishing her out-of-print titles as ebooks) and author and Cracked columnist Robert Brockway. Ganxy is entirely self-funded.

Maggie Estep Maggie Estep (March 20, 1963 – February 12, 2014) was an American writer and poet most well known for coming to prominence during the height of the spoken word and poetry slam performance rage. She published seven books and released two spoken word albums: No More Mr. Nice Girl and Love is a Dog From Hell. Biography[edit] Estep was born in 1963 in Summit, New Jersey. Estep went on to write many novels, including Diary of an Emotional Idiot, the Ruby Murphy mystery trilogy, Gargantuan, Hex and Flamethrower, and Alice Fantastic. Estep suffered a heart attack on February 10, 2014 and died from complications of it on February 12, 2014.[6] She was 50. Discography[edit] Studio albums Compilation appearances Skid Row Wine, on compilation Kicks, Joy, Darkness: A Tribute to Jack Kerouac (1997) Music videos Bibliography[edit] References[edit] External Links[edit] Maggie Estep at the Internet Movie Database

Reading Is Alive And Well At Social Reading Site Goodreads, Which Just Hit 10M Members Goodreads,the site that lets you share the books you’ve read, are reading, and want to read, says it has just hit the 10 million member mark. That means the company has doubled its registered user base in a little more than a year — 15 months, to be more precise. It took Goodreads four and a half years to reach 5 million members back in May 2011. Co-founder and CEO Otis Chandler tells me the “main accelerant of our growth this year” has the company’s new Facebook Open Graph app. He also says Goodreads’ book recommendation engine, which it launched in September after acquiring Discovereads.com, has played a big role in the growth. Chandler notes that “the publishing industry has a huge discovery problem, because books are going digital” and brick-and-mortar bookstores are disappearing. Goodreads claims to have more catalogued 360 million books, with 22 million (and climbing) added per month. The company also just moved into a new 6,000 square foot office in San Francisco.

Kindle Lending Club - Borrow and Lend Kindle Books for Free - Kindle Lending Club - Borrow and Lend Kindle Books for Free. BookLending "The Final Testament.. released as a limited-edition $50 printed book.. but you're self-publishing the ebook at $10." about 1 hour ago ? reply ? retweet ? Please note that this is a novella equivalent to 7 ... Gratitude is a choice. From the author of the Copper Star series, winner ... Easy Crosswords for Kindle, Vol 1, allows you to p ... The United States has been spending its way deeper ... While nearly everyone else at Heath High is prepar ... Lessons in Love: A Cambridge Fellows Mysteries, Book 1 He didn't think he had a heart. Everything seems to be going perfectly for Maya Da ... Leah Thornton? In this prequel to Crown Duel, teenage Shevraeth i ... (The Spell is the third book in the Big Bad Wolf s ... The Yoga Sutras of Patanjali - New Century Edition with DirectLink Technology This book has DirectLink Technology built into the ... This Halcyon Classics ebook contain the Upanishads ... Mated (A Paranormal Romance in the Blood Lust trilogy, 3) Copyright ?

Crowdfunding, Micropayments and Publishers ©Naveen Jamal I was reading an article in Fast Company about the launch of Emphas.is and came across an aspect about the model that I really hadn’t thought much about – the role and opportunity for publishers. Publishers, too, if they take a shine to a project on the site, can secure first publication rights by funding up to 50% of the project. It’ll be interesting to see what stories get picked up by large publications. Emphas.is, Kickstarter and the rest are primarily funding platforms but each has a publishing component built in as well (blogs) which make them content destinations as well. The Evolution of the Platforms Crowdfunding platforms are still very new. I’m certain there will continue to be new crowdfunding platforms launched in the future as well, and I can potentially see how publishers might start to incorporate elements of the crowdfunding model into their business models. Flattr and Social Micropayments Watch Closely and Experiment

Quality eBook Writer and eBook Design Specialists - We Write eBooks - Writing eBooks Made Easy Upper Playground | CABEZOTA Tee designed by SMITHE for Upper Playground Fifty24MX artist and renown Mexican muralist, Smithe and Upper Playground is proud to present a new T-shirt design by Smithe. Illustrated in his well known vintage Sci-Fiction style, we are excited to release this CABEZOTA Tee in Silver available in store and online at www.upperplayground.com

Amid Lawsuits From Publishers, Boundless Launches A Free, Open Alternative To Textbooks Since it first appeared earlier this year, Boston-based educational startup Boundless has been on a mission to ensure that college students have a free alternative to the pricey and bulky world of physical textbooks. The startup believes that an oligopoly of textbook publishers has been driving up costs for years (as the four top publishers currently control the lion’s share of the market) and so it set out to change that. Naturally, as a result, Boundless has found itself on the receiving end of litigation — courtesy of three of those top textbook publishers. Leaning on the $8 million it raised in April from Venrock, Nextview, Founder Collective and Kepha (and nearly $10 million total), the startup has since gone on the offensive, filing a motion to dismiss two of those claims last month, as it buckled down to fight its accusers. But to give you some quick background on Boundless: During its private beta, the startup emerged as a product (or proponent) of the Wikipedia Era.

Singularity&Co. - Save the Scifi! Crowdfunding in book publishing « TELL Fleur Preparing a general overview of crowdfunding platforms I learnt about some initiatives that focus on the book publishing industry. Earlier I was under assumption that a Dutch start-up called ‘Tenpages’ was the only player in this field. So, what is deal? Who is doing what? Crowdfunding Initiatives in Book Publishing I have come across four different initiatives. As you can tell from the included table you can find information about the separate platforms at different locations. Via Tenpages authors can upload ten pages of their manuscript hoping to convince enough readers to invest in the manuscript and become a financial supporter. Authonomy follows a similar route, but it is different in the fact that supported manuscripts are published by the owner of the platform, HarperCollins, not by partner organisations. When I come to think of it, Authonomy is not a crowdfunding but a crowdsourcing initiative at most. Competitors? This post could do with crowdsourcing of its own.

Writing and Publishing News, Marketing, E-Books—Authorlink.com How to Write for a Living Posted by James Altucher When I first wrote a novel in 1991 I remember walking down the road and seeing a pretty girl and thinking, “She might like me now”. I know that a lot of what I write seems to involve whether or not women like me. But that’s what I think about. I also wanted money. I put it in quotes because what does it matter now? How could you, my sweet baby, ever do something wrong? Note: the above sentence is what I would whisper to myself after being summoned to the boss’s office. “Don’t you have any pride in your work?” Whatever. I was 22 years old and looking at women and trying to publish a novel on the side so I didn’t have to work anymore. It took many years before I made any money as a writer. But the rules changed every 3 or 4 years and they will change again. By the way, that first novel, and the four that came after it, and the 50 short stories that came after it, never got published. When you have weights on you, you can’t move. So…GO! Some people will disagree. No.

StoryBundle Pay-What-You-Want Book Sale Launches With Sci-Fi Titles StoryBundle is just one of a few new “pay-what-you-want” book deals blossoming from the ashes of traditional publishing like ferns after a forest fire. This service, run by former Gizmodo pop star Jason Chen, is one of the cooler offerings out there right now and they started out with the Big Bang package featuring up to seven sci-fi books for your perusal and purchase. You can donate as much (or as little) as you want and a portion of your cash can go to a charity. You can also stiff StoryBundle itself, giving all the cash to the author. Your choice. “My dream is two-fold,” wrote Chen in a blog post. Services like this closely mirror similar services in the gaming and media space including the Humble Bundle aimed at raising awareness of indie games and music. We covered competitor Snug Nugget last week but I think StoryBundle is definitely a bit prettier on the surface and the book offerings seem a bit more polished.