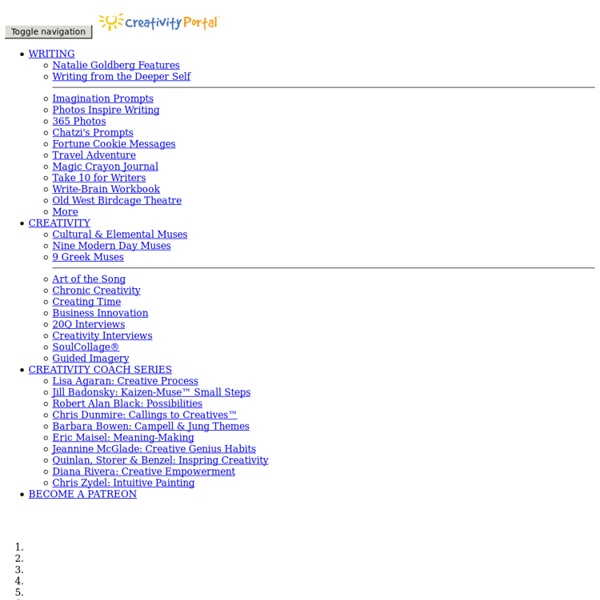 Explore, Nurture & Express Your Creativity! Creativity Portal Named ‘Best of the Best’ Creativity Site! By Chris Dunmire Writer's Digest magazine has once again named Creativity Portal on their 2014 annual 101 BEST WEBSITES FOR WRITERS list! This year we're honored with an extra bonus — a 'Best of the Best' callout, for the first time, the #1 spot in their creativity category (see image to right). Here's what they say about us:

Pixar’s 22 Golden Rules of Storytelling Back in 2011, then Pixar storyboard artist Emma Coats (now freelancing) tweeted 22 rules of storytelling, according to Pixar. Coats learned the ‘guidelines’ from senior colleagues on how to create appealing stories, tweeting the nuggets of wisdom over a 6 week period. Last week, artist and User Experience Director at Visceral Games (a subsidiary of Electronic Arts), Dino Ignacio, created a series of image macros of the 22 rules and posted them to Imgur and Reddit. Below you will find the list of image macros along with a text summary of Pixar’s 22 rules of storytelling at the end of the post. Enjoy! [Sources: Emma Coats, Dino Ignacio, The Pixar Touch]

How To Steal Like An Artist by Austin Kleon Wednesday, March 30th, 2011 Buy the book: Amazon | B&N | More… Here’s what a few folks have said about it: “Brilliant and real and true.”—Rosanne Cash“Filled with well-formed advice that applies to nearly any kind of work.”—Lifehacker.com“Immersing yourself in Steal Like An Artist is as fine an investment in the life of your mind as you can hope to make.” Naming Your Novel Note: How careful you have to be naming your novel depends heavily on if you are planning to sell it, and how you are planning to sell it. If you are an unknown who is self-publishing and you want a lot of people to read and buy your novel, you need to do extensive research on the market. This article only covers a few tips, and I am in no way a publishing expert. But, even if you don't plan on going mass-commercial, that doesn't mean you shouldn't spend some time deciding on a name for your labor of love and I hope this article provides some useful ideas.

How the Hum of a Coffee Shop Can Boost Creativity Pulling up a seat at your favorite coffee shop may be the most efficient way to write a paper or finish a work project. But now a new Web site lets you bring the coffee shop to your cubicle. The site, called Coffitivity, was inspired by recent research showing that the whoosh of espresso machines and caffeinated chatter typical of most coffee shops creates just the right level of background noise to stimulate creativity. The Web site, which is free, plays an ambient coffee shop soundtrack that, according to researchers, helps people concentrate.

Top 10 first lines in children's and teen books The boy and the old man arrived at the port at night. That's the first line in my debut novel, Close to the Wind, and I'm rather proud of it. The line doesn't shout out at you, but it does a lot of work establishing the tone of the book and giving you the setting and characters without any fuss. It's always difficult to know how to begin a book. Originally, I had a much bolder first line but during an editorial meeting it was suggested I lose it and start with the second line in.

What Are My Writing Tips? It pays to read through your spam filter, sometimes. You will be amazed by what you may find. Along with the usual spams, you could either find a legit comment or a piece of inspiration. I have found such comments. The other day, I found a curious message, in my spam filter. An apparent new blogger asked a question. 'How Creativity Works': It's All In Your Imagination iStockphoto.com What makes people creative? What gives some of us the ability to create work that captivates the eyes, minds and hearts of others? Jonah Lehrer, a writer specializing in neuroscience, addresses that question in his new book, Imagine: How Creativity Works. Lehrer defines creativity broadly, considering everything from the invention of masking tape to breakthroughs in mathematics; from memorable ad campaigns to Shakespearean tragedies. He finds that the conditions that favor creativity — our brains, our times, our buildings, our cities — are equally broad.

Fictional Culture The way I build worlds is by collecting cool stuff from the history, myth and people around me. I blend these details with my own imagination, and create my own cultures. Culture is a vital part to realistic worldbuilding. Normally there are a few particular cultures that interest me at a given time. I read whatever I can find about them, their environment, their traditions and their myths.