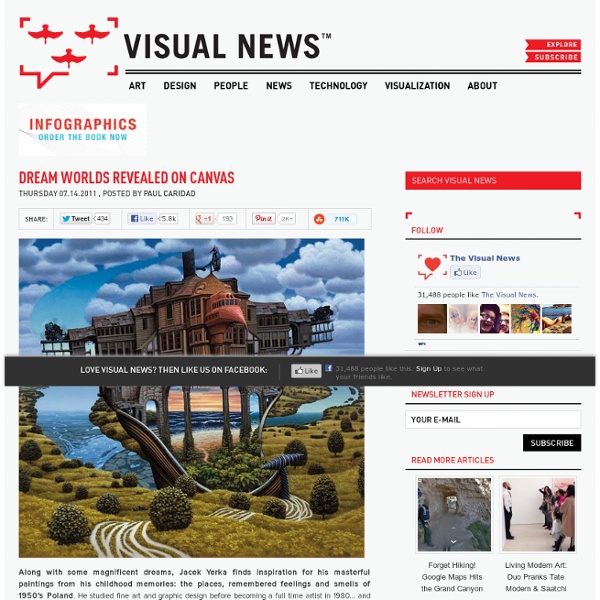 Along with some magnificent dreams, Jacek Yerka finds inspiration for his masterful paintings from his childhood memories: the places, remembered feelings and smells of 1950′s Poland. He studied fine art and graphic design before becoming a full time artist in 1980… and we’re glad he did. His paintings will take you through incredible worlds of imagination, bending reality in captivating and clever ways fit to inspire a novel or film. See many more examples of his find paintings at yerkaland.com. See Also ENDEARING MONSTER DRAWINGS POP FROM THE SCREEN Via: hypeness.com.br

When Drawings Come Alive Even the simplest of the drawings can become very impressive if you give them a little lively touch. Continuing our effort to bring you unique stuff, we have gathered some really unique pieces of art. You can use the same idea to make your drawings alive; so pick up the pencil and impress us with your idea. Crystal River - The most beautiful river on earth [Pics] Cano Cristales - Crystal River. River of five colors, as the locals call it, originates in the south of the mountain chain Macarena, Colombia, and flows eastward to its confluence with the Guayabero river. In the Cano Cristales found five colors: yellow, blue, green, black and red.

The Beauty Of Cinemagraph GIFs Developed in 2011 by Jamie Beck and Kevin Burg, cinemagraphs are GIF images that combine still photography and video to produce a stunning effect. Typically, the entire GIF is motionless except for one or two elements, providing a brilliant juxtaposition between the motion and the motionless. For your viewing pleasure, we’ve collected 43 beautiful cinemagraph GIFs: The hand - StumbleUpon The hands are a notorious source of frustration. This section won't concentrate on the muscle structure, since the hand is very complex in this regard, and knowing this won't help much in drawing them. Instead, we'll look at proportions, range of motion, and possible simplifications.

Amazing Droste Effect Photos that will Twist Your Mind Nov 09, 2010 / Category : Photography / 1 Comment The technical term for this illusion is the "Droste effect" named after a 1904 package of Droste brand cocoa. A picture exhibiting the Droste effect depicts a smaller version of itself in a place where a similar picture would realistically be expected to appear. This smaller version then depicts an even smaller version of itself in the same place, and then goes on and on... A perfect example of the Droste effect can be simply produced by placing two mirrors in front of each other. Another technique would be to shoot one's own television with a video camera, while showing the output of the video camera on the same television.

Photographs with a different Point of View So you all love when a photograph is not just a photograph! How about some images from a different point of view? As the camera’s view-point changes to that one sweet spot, these images look to defy gravity and laws of physics. Buckle up and as some of these images are about to melt your brains. Image Sources: 1, 2, 3 The First Zombie-Proof House Somehow, ritual drunk-conversation concerning team captains for the apocalypse has become a major part of the lives of 20-somethings. Having been matured in the Grandaddy-crowned masterpiece film (put “A.M. 180” on and forget that you have a job) 28 Days Later and the best-selling Zombie Survival Guide, we’re all a little too ready to deal with the 2012 zombie apocalypse of our dreams. “The Safe House,” designed by KWK Promes, starts to get eerily close to something I could work with, if say 200 bludgeoned members of the undead army came over to eat their way into borrowing some sugar. “The most essential item for our clients was acquiring the feeling of maximum security,” begins the designers’ website in the summary of the structure. Who wouldn’t feel safe in a concrete rectangle that folds in upon itself to become completely sealed?

Stumblers Who Like 50 of the World's Best Breakfasts – Written by Victoria Philpott Not quite had your fill of breakfasts just yet? Check out our beautifully visual list of the 30 best breakfasts from around the world. The Art of Negative Space. on the Behance Network - StumbleUpon Sign Up Log In The Art of Negative Space. Project Featured On: Amazing Illustrations Art By Chinese Artist An amazing illustration art is a displayed visualization form presented as a drawing, painting, photograph or other work of art that is created to elucidate or dictate sensual information (such as a story, poem or newspaper article) by providing a visual representation graphically. Peony Yip, also known as The White Deer, is an illustrator from Hong-Kong, China. Her artwork encompasses a lot of women portraits, animals drawings, and sometimes both of them in one. Peony’s art reflects sensuality and femininity.Today, there is a growing interest in collecting and admiring original artwork that was used as illustrations. here we showcase amazing illustrations by Chinese artist you see this post and comments about this post.

Amazingly Creative Drawing Vs Photography This wonderful work has done by a very talented Belgian painter, illustrator, portraitist, caricaturist and photographer Ben Heine. This creative artist was born in Abidjan, Ivory Coast. He Studied graphic arts and sculpture and I also have a degree in journalism. Lets take a look at some of his awesome works that he calls “Drawing Vs Photography” or “Imagination Vs Reality”. Still Life: Bent Objects UPDATE: The Return of Bent Objects Wires transform these objects from inanimate to hilarious works of art. Little polish girl McDonalds as Sculpture Materials Yeah, this is where those come from Dancing Queens