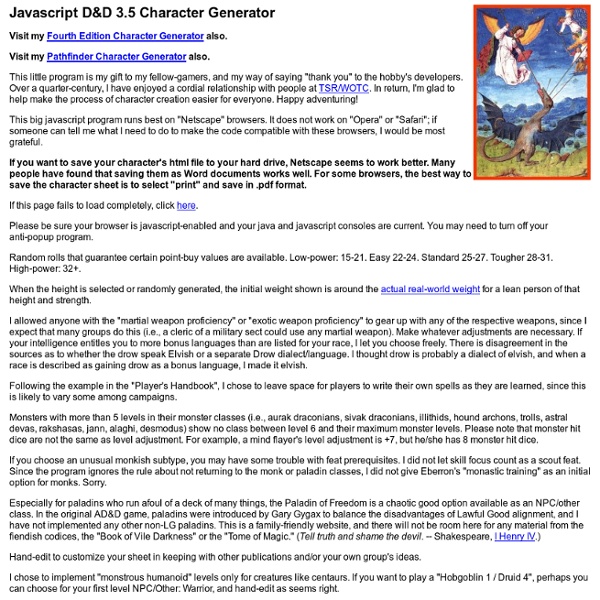 Javascript D&D 3.5 Character Generator Visit my Fourth Edition Character Generator also. Visit my Pathfinder Character Generator also. This little program is my gift to my fellow-gamers, and my way of saying "thank you" to the hobby's developers. Over a quarter-century, I have enjoyed a cordial relationship with people at TSR/WOTC. In return, I'm glad to help make the process of character creation easier for everyone. This big javascript program runs best on "Netscape" browsers. If you want to save your character's html file to your hard drive, Netscape seems to work better. If this page fails to load completely, click here. Please be sure your browser is javascript-enabled and your java and javascript consoles are current. Random rolls that guarantee certain point-buy values are available. When the height is selected or randomly generated, the initial weight shown is around the actual real-world weight for a lean person of that height and strength. Demihumans: Humanoids: * Dragonlance style

Free Dungeons - Free RPG Adventures PewDiePie Heavy Explorer-class Starships This is a conceptual design study for a heavy explorer class of starships. This class is based on ideas proposed by the group and a series of driving assumptions. The resulting craft is a large, capable, mobile research platform with enough personnel and resources to adequately explore a star system. Design Assumptions The assumptions are: No unforseen advances in technology. Crew Habitation area - shielding and artificial gravity.Crew food mass numbers - Primary Drive System Multi-cycle RAIR - This system was the original one I suggested for the Explorer class starship design. Externally Fueled Fusion - This system was the final and current one I suggested for the Explorer class starship design. Overview of all concepts The Externally fueled Fusion rocket concept is a solid baseline design. More important to the assumptions of the LIT group, this drive system is not capable of near relativistic flight. Power Requirements As you probably already gathered. Ships Manifest Crew support manifest