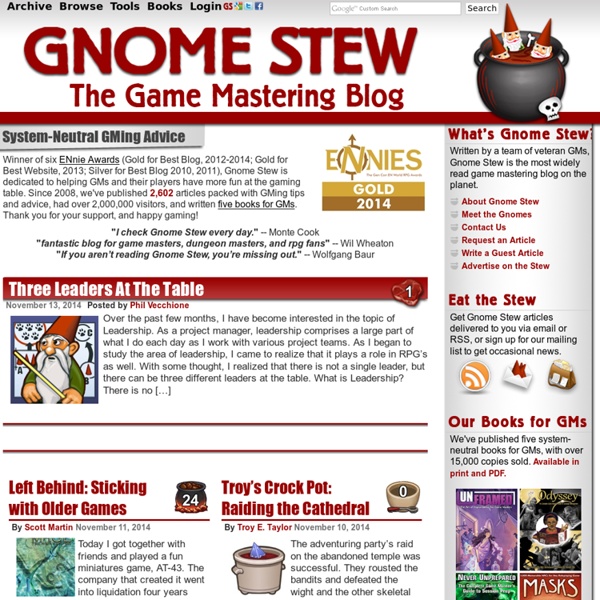 In many stories in books, on television, and in the movies, the protagonists are often dealt one or more setbacks before the story reaches its climax. In these cases the writer crafts specific events with an intended purpose and outcome. In Role Playing Games, we GM’s often rely on the players to create their own setbacks during a session and within a campaign through bad rolling and impulsive decision making, but there are times the GM wants to write a setback into the game. Depending on […]

Home PAX East Live Game: 2014 When last we left our heroes, they had defeated one of the most terrible foes the Realms had ever seen, and carved out a little space in the city of Waterdeep that they could call their own. Now a new opportunity… err… adventure beckons! Word has reached the Acquisitions Incorporated headquarters of some dragon eggs that are in great peril. The Alexandrian - Misc Creations An Essay by Justin Alexander I think every GM probably has a story about the time that they spent hours carefully detailing some piece of lore or a particularly intricate conspiracy... only to discover that their players didn't really care. Or you complete a dramatic and powerful series of adventures featuring the unraveling of a conspiracy wrought by the Dark Gods of Keht... but three months later you mention the name "Keht" and are met by blank stares from the players. But often -- even as you're meeting with this kind of frustration -- the players are still having a great time.

Roleplaying Tips for game masters for all role-playing systems Roleplaying Tips Weekly E-Zine Issue #418 Contents: This Week's Tips Summarized 4 City Building Tips: Give cities flavour with districts Readers' Tips Summarized Sangrolu: The Blood Lich The Blood Lich, or Sangrolu is truly an abomination; a merging of the lich and the vampire. Legends of the sangrolu's' creation abound in the tomes of long-dead sages, but most of them agree that the first sangrolu was a vampire who wanted to escape the bounds of the night and forever leave the dominion of Kanchelsis, the God of vampires. Sangrolu are created when a vampire creates a variant of the black potion used to turn a mortal wizard into a lich, and drinks it.

The Dead Villain’s Catalogue / Kobold Quarterly October 8, 2010 / Phillip Larwood Or 30 Things to find on a Villain’s Corpse. [See The Dead Adventurer’s Catalogue] Wendell bent over the body of the goblin chieftain they had just slaughtered, his slender hands shifting through the goblin’s filthy goods until he encountered something shiny and hard. “Look here, Tarquilos my old friend. Tower of the Ape: Savage Worlds Deluxe Role-Play Drama – Gamerstable – A podcast about tabletop role playing games and other nerd culture topics. For those who want the entire Tower of the Ape experience in one, Player Characters: Renyard Durand – Poitanian Swordmaster Played by Mike Valacious - Mysterious Sorcerer

Tabletop Games - Alchemy Ingredients - Character Sheet OSRIC™ - Follower Sheet OSRIC™ - Character Sheet T&T™ 5e Dice of Doom Dice of Doom Podcast 045: Rules that enhance Roleplaying Games and Crafting “Who ‘dun it?” Mysteries In this carrot dangling episode we discuss rules mechanics and how they can be used to enhance roleplaying games. The Alexandrian » Three Clue Rule Mystery scenarios for roleplaying games have earned a reputation for turning into unmitigated disasters: The PCs will end up veering wildly off-course or failing to find a particular clue and the entire scenario will grind to a screeching halt or go careening off the nearest cliff. The players will become unsure of what they should be doing. The GM will feel as if they’ve done something wrong. And the whole evening will probably end in either boredom or frustration or both. Here’s a typical example: When the PCs approach a murder scene they don’t search outside the house, so they never find the wolf tracks which transform into the tracks of a human. They fail the Search check to find the hidden love letters, so they never realize that both women were being courted by the same man.

d20 Encounter Calculator Choose the number of monsters (or traps) encountered. Select the challenge rating (CR) of the monsters (or traps). Choose the number of player characters involved in the encounter. Select the effective character level (ECL) of the characters. This field indicates the appropriate experience point (XP) award for characters who overcome this encounter. See page 36 of the Dungeon Master's Guide for details.

GM Advice: A Learning Mechanic I had a reader ask about the mini-game that appears in my D&D campaign. A few people have expressed interest in it, and I thought it might be worth a look. I don’t pretend this is clever or innovative. This is very much a system I cobbled together as I was groping around trying to simulate a character learning. In our game, I had a situation where one player was working to translate a “book”, which was several pages of backstory they needed to know.