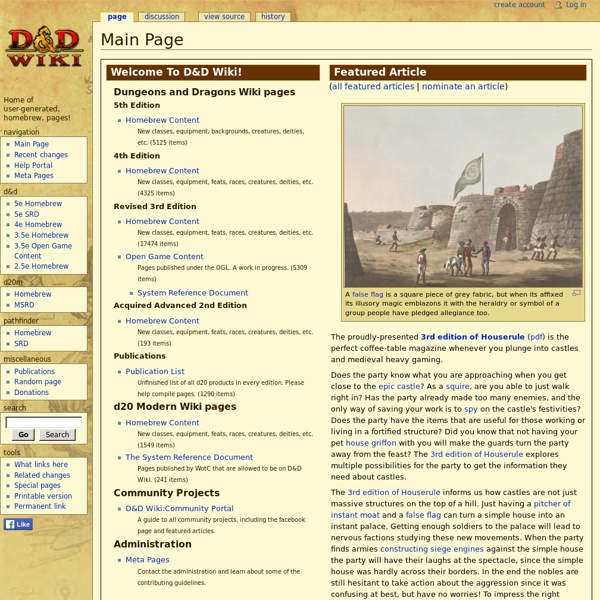 Home PAX East Live Game: 2014 When last we left our heroes, they had defeated one of the most terrible foes the Realms had ever seen, and carved out a little space in the city of Waterdeep that they could call their own. Now a new opportunity… err… adventure beckons! Word has reached the Acquisitions Incorporated headquarters of some dragon eggs that are in great peril. The Group [3.5] Dawnblade: the duskblade's paladin DAWNBLADE"Superman don't need no seat belt."-- Muhammad Ali"I am a sexy, shoeless god of WAR!"-- Belkar, The Order of the Stick The dawnblade is a righteous slayer, a mighty warrior who engages in battle for his god or his principles. In combat he moves fast and strikes hard, felling foes with both smites and channeled spells. He also debuffs tough foes, coordinating fellow party members and making it easier to take down a difficult opponent.

Sangrolu: The Blood Lich The Blood Lich, or Sangrolu is truly an abomination; a merging of the lich and the vampire. Legends of the sangrolu's' creation abound in the tomes of long-dead sages, but most of them agree that the first sangrolu was a vampire who wanted to escape the bounds of the night and forever leave the dominion of Kanchelsis, the God of vampires. Sangrolu are created when a vampire creates a variant of the black potion used to turn a mortal wizard into a lich, and drinks it. (See Ecology, below) Vampires that imbibe this dark potion must still succeed a System Shock check, as must a mortal.

Tools You must have Java 1.6 or later (also called Java 6) installed on your system to run these tools. Note that the OpenJDK/Java 7 does not currently work. Some tools require Java 5 or later as indicated on the Launch page. If you are using Mac OS X, your Java implementation is provided by Apple. Use Software Update to ensure you have the most up to date version.