How the Google Possum update will change local SEO. Google has shaken up how local search works, meaning that businesses that aren’t geographically in the city centres now have more of a chance of appearing in the Map Pack than they did previously. 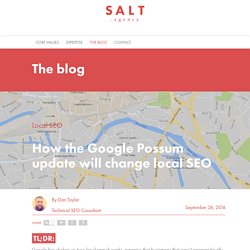 The search engine has also placed greater importance on a user’s physical location, and businesses that share the same address are now being filtered. At the start of September (2016) Webmasters and search marketers everywhere noticed (and felt) two very large algorithmic updates. Initially, some SEOs believed that it was the Penguin 4.0 update rolling out while others (myself included) passed it off as a Phantom update. How People Use Their Devices. In a mobile-first world, people expect answers at their fingertips. 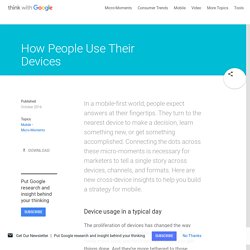 They turn to the nearest device to make a decision, learn something new, or get something accomplished. Connecting the dots across these micro-moments is necessary for marketers to tell a single story across devices, channels, and formats. Here are new cross-device insights to help you build a strategy for mobile. Pandora. Tim Cook Says Augmented Reality is 'Larger' Than Virtual Reality. 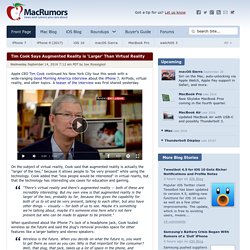 A teaser of the interview was first shared yesterday. On the subject of virtual reality, Cook said that augmented reality is actually the "larger of the two," because it allows people to "be very present" while using the technology. Cook added that "less people would be interested" in virtual reality, but that the technology has interesting use cases for education and gaming. "There's virtual reality and there's augmented reality -- both of these are incredibly interesting. But my own view is that augmented reality is the larger of the two, probably by far, because this gives the capability for both of us to sit and be very present, talking to each other, but also have other things -- visually -- for both of us to see. Apple Rumors: iOS 10 Designed for Apple’s Augmented Reality Technology; Tim Cook Hinted about Upcoming VR/AR Headsets? : Trending News : University Herald. Apple CEO Tim Cook has been constantly discussing about augmented reality sorts of in almost any of his interview. 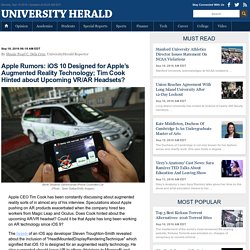 Speculations about Apple pushing on AR products exacerbated when the company hired two workers from Magic Leap and Oculus. Does Cook hinted about the upcoming AR/VR headset? Could it be that Apple has long been working on AR technology since iOS 9? Why Augmented Reality is Set to Become an Enterprise Mainstay. :: By Krish Kupathil, Mobiliya :: While the earliest roots of augmented reality (AR) may be traced to consumer-centric domains like retail, advertising, media and entertainment, its future lies in the core enterprise sector. 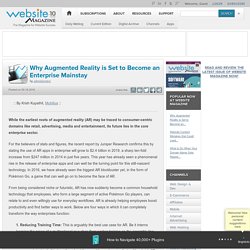 For the believers of stats and figures, the recent report by Juniper Research confirms this by stating the use of AR apps in enterprise will grow to $2.4 billion in 2019, a sharp ten-fold increase from $247 million in 2014 in just five years. This year has already seen a phenomenal rise in the release of enterprise apps and can well be the turning point for this still-nascent technology. In 2016, we have already seen the biggest AR blockbuster yet, in the form of Pokémon Go, a game that can well go on to become the face of AR. From being considered niche or futuristic, AR has now suddenly become a common household technology that employees, who form a large segment of active Pokémon Go players, can relate to and even willingly use for everyday workflows. What You Should Know About Performance Marketing. What is Performance Marketing? 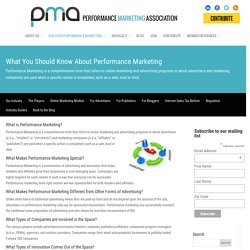 Performance Marketing is a comprehensive term that refers to online marketing and advertising programs in which advertisers (a.k.a., “retailers” or “merchants”) and marketing companies (a.k.a, “affiliates” or “publishers”) are paid when a specific action is completed; such as a sale, lead or click. What Makes Performance Marketing Special? Performance Marketing is a combination of advertising and innovation that helps retailers and affiliates grow their businesses in ever-changing ways. Campaigns are highly targeted for each retailer in such a way that everyone can be successful. First Rule Of Marketing: Focus On Your Audience. Everyday if you read you will hear a lot of experts, consultants and pundits share their tutelage about what makes for great marketing. 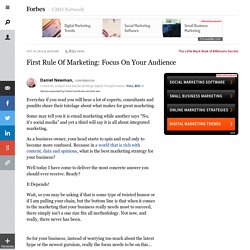 Some may tell you it is email marketing while another says “No, it’s social media” and yet a third will say it is all about integrated marketing. As a business owner, your head starts to spin and read only to become more confused. 3 Digital Marketing Trends That Are Hard to Ignore. Forbes Welcome. 10 Ways Brands Are Talking About the Olympics Without Saying 'Olympics'

From euphemistic hashtags to furry athlete stand-ins, companies are getting clever. 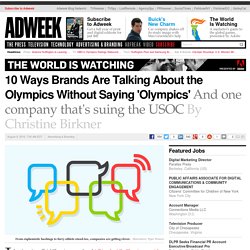 If you're not an official Olympic sponsor brand, talking about the Olympics on social media during the games can be a minefield thanks to the U.S. Olympic Committee's strict intellectual property rules. Some brands have managed to leverage the enthusiasm of the games without breaking the rules, however. Here's how they're doing it: Getting USOC waivers prior to the games. NBC Universal Acquires Exclusive Broadcast And Cable Television Rights In The United States To J.K Rowling's Wizarding World Franchise - WarnerBros.com - The Studio - News. (August 8, 2016 – New York, NY) – NBCUniversal today announced an exclusive deal with Warner Bros. 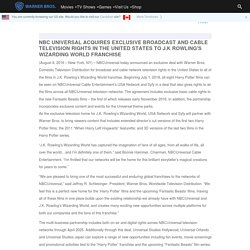 Domestic Television Distribution for broadcast and cable network television rights in the United States to all of the films in J.K. Rowling’s Wizarding World franchise. Beginning July 1, 2018, all eight Harry Potter films can be seen on NBCUniversal Cable Entertainment’s USA Network and Syfy in a deal that also gives rights to air the films across all NBCUniversal television networks. The agreement includes exclusive basic cable rights to the new Fantastic Beasts films – the first of which releases early November 2016. In addition, the partnership incorporates exclusive content and events for the Universal theme parks. Complete Debate Restrictions to Which You Must Abide. 6:00 PM/ET and ending at 7:00 PM/ET Fox News Network, LLC, owner of the Fox Business Network has secured exclusive media rights to the Republican Presidential Primary Debate taking place at the North Charleston Coliseum and Performing Arts Center in North Charleston, South Carolina and airing on the Fox Business Network, as well as Fox Business Mobile, foxbusiness.com and Fox News Radio (collectively hereinafter referred to as “Fox Business”), on January 14, 2016 beginning at 6:00 PM/ET (the “Debate”). 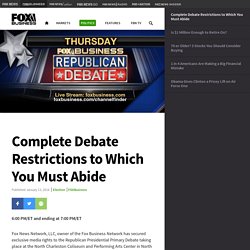 You are hereby advised to respect Fox Business’ exclusive rights to the Debate by not broadcasting, transmitting, selling, licensing, giving, bartering, exchanging or otherwise disseminating the Debate, or any portion thereof, regardless of whether Fox Business supplied you the Debate or if the Debate or excerpts were supplied to you by other sources. Permission to use the Debate is only granted if the following restrictions are adhered to: Continue Reading Below. In potential Fox-Big Ten rights deal, the big story may be ESPN.

It is notable that Fox Sports and the Big Ten Conference are close to a media rights deal covering half of the available package because it is the only major sports rights property on the market for the next several years. News of the pending deal last week sparked a number of questions from media and college executives who were surprised by the timing and wanted to learn more details about it. Given Fox’s existing business relationship with the network — it owns 51 percent of Big Ten Network — the news that Fox would pick up some of the conference’s rights is not so surprising. It was the other aspects of the deal that became the industry’s hottest topic last week. Amazon Is Quietly Eliminating List Prices. “They still need to showcase deals, but the question is, How?” Said Michael Kovarik, who runs a comparison-pricing start-up called Rout.

That is why stores love big discounts: they work. In studies by Mr. Compeau and others, the perception of a deal is often what makes the purchase happen. Tom Wheeler defeats the broadband industry: Net neutrality wins in court. The US broadband industry has lost its lawsuit attempting to overturn the Federal Communications Commission's net neutrality rules and the related reclassification of Internet service providers as common carriers. ISPs' First Amendment claims (among others) were rejected. "Because a broadband provider does not—and is not understood by users to—'speak' when providing neutral access to Internet content as common carriage, the First Amendment poses no bar to the open Internet rules," judges wrote in a decision released today by the US Court of Appeals for the District of Columbia Circuit (full text).

The net neutrality order, passed over a year ago, is FCC Chairman Tom Wheeler's signature move during a whirlwind time as head of the commission. AT&T promised to appeal, saying, "We have always expected this issue to be decided by the Supreme Court, and we look forward to participating in that appeal.

" 10 tips for avoiding shady SEO providers. Top Five Digital Marketing Trends For 2016. As January finally draws to a close, and we congratulate ourselves on having made it through arguably the most miserable month of the year, thoughts turn to what the rest of 2016 holds. From a digital marketing perspective, here at Brightcove we see there being five top trends to watch out for throughout 2016: marketing automation, interactive video, personalisation, account based marketing, and live video experiences.

Let’s take a quick look at each: 1. Marketing automation. 6 Email Personalization Techniques That Go Beyond a Name. We are living in the era of personalization. We have an abundance of data at our fingertips, but we don’t always make the most of the opportunity it provides. Many businesses have been incredibly slow to take up personalization. In fact it has been reported that only 5% of companies personalize extensively. 5 Marketing Automation Fails Every Marketer Needs to Know. Keywords Are Dead! Long Live User Intent! 5 Unbeatable Benefits of Case Studies for Content Marketing - Navigator Multimedia. Keeping Client Testimonial On Website: Is It Right & Still Effective!

11 Testimonial Page Examples You'll Want to Copy. Why and How to Use Testimonials to Increase Website Conversions. The B2B Content Marketing Survey Says… Doing These 5 Things Will Get You Ahead in 2016. 3 Tips to Repurpose Content and Make it More Effective. Welcome. 28 Social Media Marketing Predictions for 2015 From the Pros Social Media Examiner. How Traditional Websites Could Become Obsolete By 2020. CFPB Orders Amerisave To Pay $19.3 Million For Bait-And-Switch Mortgage Scheme > Newsroom. Social Media Help Empower Utilities. IA BRIEF: The state of adviser social media compliance in the U.S.

Wearables and smart watches top list of most ‘overhyped’ technologies. How Millennials, Boomers, and Gen X-ers Respond to Content Marketing. Truth Will Out - Why Authenticity is the Key to Growing Your Business. Racism and xenophobia are exactly why Republicans love Donald Trump, polls show. Walmart Answers Amazon’s “Prime Day” With Deals And Free Shipping. Beacons, Bluetooth & Mobile: The Future of Context Marketing. The Logic Behind Amazon’s Prime Day. I-Want-to-Buy Moments: How Mobile Has Reshaped the Purchase Journey. BIA/Kelsey Local Media Watch - The Nexus of All Things Local. HomeServicesMarketing.pdf. This Week on the Web: March 6, 2015.

Google. How Is Our Digital Revolution Doing? - The CIO Report. Three Key Components to Generating Leads Online. Says 4.9 Billion Connected "Things" Will Be in Use in 2015. Google. 10 Years of Digital Marketing Trends in 10 Graphs. Reenergize Marketing & Sales with an Inbound Approach [VIDEO] More Context With Google Analytics Benchmarking. Finding Hidden Content Opportunities For Your Local Website. Why Marketing Tech Investments Will Change in 2015. A Web Analytics Primer - What Does It All Mean? Whitepaper: How to Avoid Software Paralysis - MOFU Campaign. Web analytics primer for smb. New Benchmarking Reports Help Twiddy Boost Email Open Rates by 500%