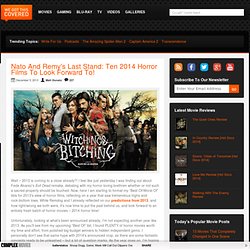 I feel like just yesterday I was finding out about Fede Alvarez’s Evil Dead remake, debating with my horror loving brethren whether or not such a sacred property should be touched. Now, here I am starting to format my “Best Of/Worst Of” lists for 2013′s slew of horror films, reflecting on a year that saw tremendous highs and rock-bottom lows. While Remdog and I already reflected on our predictions from 2013, and how right/wrong we both were, it’s now time to put the past behind us, and look forward to an entirely fresh batch of horror movies – 2014 horror time!

Unfortunately, looking at what’s been announced already, I’m not expecting another year like 2013. Screen Rant’s 10 Most Anticipated Horror Movies of 2013. Movies you should not watch on a first date, Megan is Missing. It’s difficult to pick a movie for a first date. 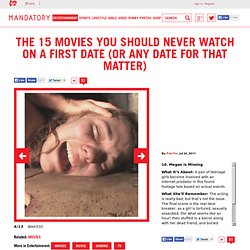 Even if you’ve browsed her Facebook page, who knows if she ‘Liked’ Maid in Manhattan ironically or if she’s a legitimate J-Lo Rom-com fan. Of course there’s the chance that she’s trendy and artsy so you want to watch something intelligent and edgy, but how far is too far? The Collection (2012) 6 Utterly Traumatizing French Horror Films To Watch On Halloween. The first time I sat down to watch a French horror movie, it was a film called Switchblade Romance (which would later get the name change High Tension for American Audiences), and it fucking floored me. 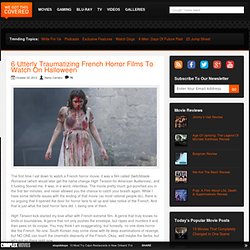 It was, in a word, relentless. The movie pretty much gut-punched you in the first ten minutes, and never allowed you the chance to catch your breath again. While I have some definite issues with the ending of that movie (as most rational people do), there is no arguing that it opened the door for horror fans to sit up and take notice of the French. And that is just what the best horror fans did. I, being one of them. High Tension kick-started my love affair with French extreme film. So with Halloween fast approaching, and me covering almost every other horror subject ever with the wonderful Matt Donato in our weekly column, The Last Stand, I wanted to tackle a sub-genre of horror that most don’t, and that is what brings us here.

French extreme cinema. Next Livid. 11. ‘The Hitcher II: I’ve Been Waiting’ (2003) — Sequels You Probably Don’t Know. The best horror movies you have never seen, Chernobyl Diaries. As a horror fan, it gets frustrating trying to wade through the mounds of subpar movies in search of a hidden gem. 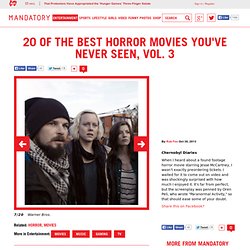 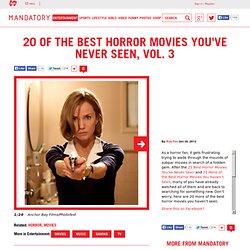 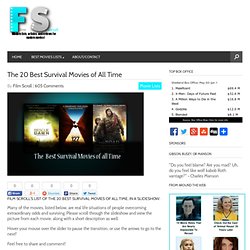 Snakes on a Plane (2006) About the film: For those of you who have seen this, you know that this is in no way a good movie. Its filled with terribly animated snakes and a terrible plot, however, watching Sammy L stomp around like a madman killing fake snakes and curse like a sailor makes it amazing. 19. About the film: Awesome story about two Jewish brothers who start a resistance against the Nazis during the second world war. Russian fighters in order to protect themselves hundreds of other Jewish people. 18. About the film: I actually really enjoyed this movie. 7 Movies That Are Incredibly Hard To Watch. I’ll go out on a limb and give a rough estimation that about 97% of movie buffs have come across at least one movie at some point in their lives that they just couldn’t watch from start to finish. 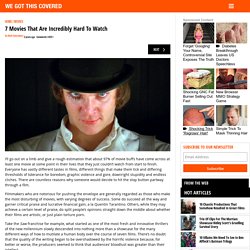 Everyone has vastly different tastes in films, different things that make them tick and differing thresholds of tolerance for boredom, graphic violence and gore, downright stupidity and endless cliches. There are countless reasons why someone would decide to hit the stop button partway through a film. Filmmakers who are notorious for pushing the envelope are generally regarded as those who make the most disturbing of movies, with varying degrees of success. Top Scary Movies; 5 Movies That Will Scare the Hell out of You This Halloween. Horror movies are a funny bird. 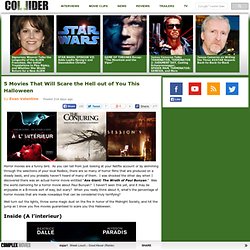 As you can tell from just looking at your Netflix account or by skimming through the selections of your local Redbox, there are so many of horror films that are produced on a steady basis, and you probably haven’t heard of many of them. I was shocked the other day when I discovered there was an actual horror movie entitled “Axe Giant: The Wrath of Paul Bunyan.” 5 Horror Movies That Shouldn't Have Bombed!!! - Box Office success has very little to do with a film’s actual quality. 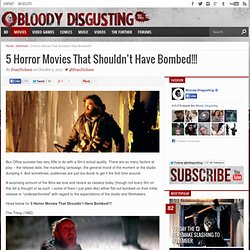 There are so many factors at play – the release date, the marketing campaign, the general mood of the moment or the studio dumping it. And sometimes, audiences are just too dumb to get it the first time around. A surprising amount of the films we love and revere as classics today (though not every film on this list is thought of as such – some of them I just plain like) either flat-out bombed on their initial release or “underperformed” with regard to the expectations of the studio and filmmakers. The 6 Most Disturbing Movie Scenes From 2013.

Anytime a year ends, we all get the same things from every website. 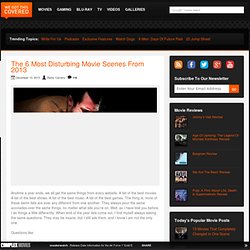 A list of the best movies. A list of the best shows. A list of the best music. A list of the best games. The thing is, none of these damn lists are ever any different from one another. Questions like: What were the best sex scenes? Who was the scariest bad guy? What scenes were most disturbing? Although all of those seem fun, the most disturbing scenes list is the one I am most looking forward to reading and it is the one that I will take a stab at first. 25 Great Psychological Thrillers That Are Worth Your Time. Described as a story which emphasizes the psychology of its characters and their unstable emotional states, the following films are benchmarks for what a successful psychological thriller should aspire to be. Instead of displaying legions of gore and violence, their main objective is to play with your mind. To leave it up to you to construct the tension of what you have just witnessed. Top 5 Movies That Scared the Hell Out of Me. 5 Films That Frightened Me. You might laugh at what frightens me.

Everyone is built different; one person's fear is another's source of amusement. One evening a friend came over just as I was starting to watch The Shining on TV. My friend laughed as the foreboding music began to play, even before the titles appeared, and then he kept laughing during the opening credit sequence. It was annoying; I asked him what was so funny. "I laugh when I'm really, really scared," were his parting words as he hastily departed. So consider this list a cinematic confessional: five films that, when I first watched them, shook me to my core, sometimes for reasons that I'm still reluctant to explore. 5. 4. 3. 2. 1.

Below I've embedded the opening credit sequence from The Shining; see if you can watch all three minutes without a shiver crawling down your spine. Most Disturbing Horror Movies. Top 5 Horror Movies Based on Horrifyingly True Stories. Sinister (2012) The Ten Spot: Most Disturbing Movies Ever. Top 10 Creepiest Characters in Film. The Apparition (2012)