10 Novels That Are Scarier Than Most Horror Movies 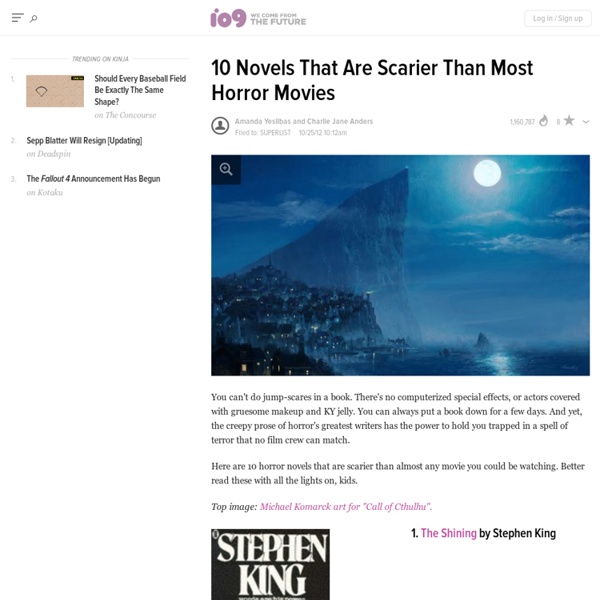 The Last Policeman: solving a murder before an asteroid wipes out life on Earth Last year I read Bedbugs , Ben Winters' psychological thriller/horror novel about a woman who was certain that her apartment was filled with bedbugs, while her husband was telling her that she was imagining them. It reminded me of Rosemary's Baby, one of my favorite movies. The Last Policeman is Ben Winters' third novel (he also wrote Sense and Sensibility and Sea Monsters , which I have not read), and I enjoyed it even more than Bedbugs.

Famous Television Show Home Floor Plans After years of watching shows like Dexter and Two and a Half Men, you can’t help but become so attached to the television show that you start wondering what their household really looks like. Spanish interior designer Iñaki Aliste Lizarralde had the same thought as us, and decided to do something for himself creating this incredible series of highly detailed floor plans from some of our favorite television shows. The collection includes the likes of The Simpson, Dexter, Friends, Seinfeld, Two and a Half Men, The Big Bang Theory, How I Met Your Mother, and a handful others. Each of the floor plans is highly detailed, and not only includes the architectural side of things, but also goes into immense furnishing details really bringing these television shows to life. As a huge fan of a lot of these shows, this was definitely a project we could appreciate the amount of time and effort that was put in.

50 Sophisticated Words You Should Start Using Instead - Online College Your New Year's resolutions might have included getting more exercise, or going back to school to get your degree. Might we humbly suggest you also take this time of starting things anew by phasing out some of the played-out words in your vocabulary and replacing them with creative alternatives? Don’t feel bad; everyone you know has been guilty of letting a "fail" or an "LOL" slip at least once in a while. Before and After Special Effects from Various Notable Scenes Special effects are crazy and if they’re overused, can be off-putting (I’m looking at your Star Wars Episodes 1-3). But used right, and special effects can make a scene and drastically reduce set budgets. Check out these before and after shots of rather notable sets that we stumbled upon, including a pair from everyone’s favorite zombie show, The Walking Dead. Related The Best Fstoppers’ Posts From January 2013

30 Books I’m Glad I Read Before 30 In various ways, these 30 books convey some of the philosophy of how Angel and I live our lives. I honestly credit a fraction of who I am today to each title. Thus, they have indirectly influenced much of what I write about on this site. A medley of both fiction and nonfiction, these great reads challenged my internal status quo, opening my mind to new ideas and opportunities, and together they gave me a basic framework for living, loving, learning and working successfully. If you haven’t read these books yet, I highly recommend doing so. They will enrich your library and your life.

10 Essential Books for Book Nerds What makes a book nerd? Reading a lot of books — and liking to talk about said books — is a major requirement, of course, but there’s often something a little more nebulous involved: book nerds are the kinds of people who get a little thrill when walking into a bookstore, who press volumes into their friends’ hands with serious promises of life changing moments, who are fascinated by following the many tangled threads through authors and literature, happily wandering wherever they might lead. Robin Sloan’s recently published Mr. Penumbra’s 24-Hour Bookstore is a book for such people — if you can’t already tell from the title.

Banksy Inside « The Drop Kings The mysterious Banksy just released some new paintings on his website. You heard it right, Banksy painted on a canvas. All Banksy fans will appreciate. Here are a few of my favourites. Why I am an Atheist In 1903, Kentucky-based newspaper "Blue-grass Blade" asked its readers to write in and contribute to a forthcoming feature named, "Why I am An Atheist." Hundreds of letters soon arrived and many were subsequently reprinted in the paper; over a century later, in 2011, they were compiled to form the book, Letters from an Atheist Nation. Below is just one of the letters. It was written by Minnie Parrish, a 23-year-old divorced mother of four who later went on to become the first female doctor to practice in North Texas. (Source: Letters from an Atheist Nation.)

These Photos Are Actually Pencil Perfect Drawings At just 22 years old, Italian artist Diego Fazo has developed the skill to create photo-realistic drawings using a simple charcoal pencil. His latest creation, pictured below, has drawn hundreds of positive comments on his Deviant Art profile. Don’t tell me you can tell the image below is a drawing and not a high-definition photograph, because I don’t buy it. In fact people were so skeptical this incredible piece of art was drawn by hand that young Diego Fazo had to put up some photos of the work in progress just to lay doubts to rest.

The 100 Best Science Books of All Time Image by Biblioteca de la Facultad de Derecho (CC BY 2.0) The 100 Best Science Books of All Time list contains a mixture of classic and popular works, chosen for their accessibility and relevance. Most of the books selected are suitable for a well educated layman with only a few being for a more serious reader. The list covers the obvious subjects: biology, chemistry, and physics, as well as mathematics, the philosophy of science, and the history of science. It also includes several biographies. Victor LaValle On Mental Illness, Monsters, Survival In Victor LaValle's new novel, The Devil in Silver, a man is mistakenly committed to a mental hospital where a buffalo-headed monster stalks patients at night. The plausibility of a monster roaming the hospital's halls made sense, says LaValle, who has a personal connection to the mentally ill. "The times that I've been in those hospitals — even as someone who was not even institutionalized at the time — I felt so much like I was in a haunted house," LaValle tells Fresh Air's Terry Gross. "And if I had looked down that hallway, for a week, for a month, for a year, at some point, it would not have been that impossible to believe that I would see something rounding that corner, something strange, something impossible, because my mind could no longer register the reality I was living in.

10 Books You ABSOLUTELY MUST READ If You Are Tired Of Being Broke (No Self-Help Rah-Rah Bullshit) 1. Buffettology: The Proven Techniques for Investing Successfully in Changing Markets That Have Made Warren Buffett the World's Most Famous Investor I NEVER buy books on stock market. And neither should you.