The 10 Most Disturbing Books Of All Time 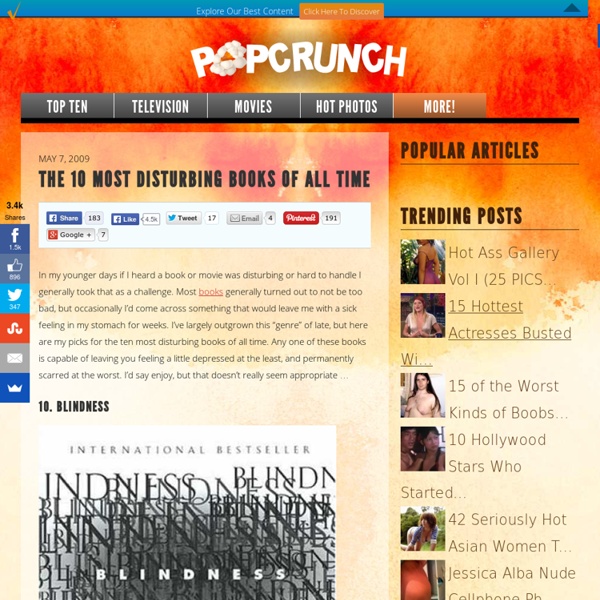 In my younger days if I heard a book or movie was disturbing or hard to handle I generally took that as a challenge. Most books generally turned out to not be too bad, but occasionally I’d come across something that would leave me with a sick feeling in my stomach for weeks. I’ve largely outgrown this “genre” of late, but here are my picks for the ten most disturbing books of all time. Any one of these books is capable of leaving you feeling a little depressed at the least, and permanently scarred at the worst. I’d say enjoy, but that doesn’t really seem appropriate … 10. Blindness is a book with a truly horrifying scenario at it’s heart: what if everyone in the world were to lose their sight to disease in a short period of time? 9. Anti drug crusaders should stop airing goofy commercials that nobody takes seriously and start pushing to have Requiem For A Dream made required reading for every high schooler in the country. 8. Naked Lunc is another ode to drug addiction. 7. 6. Bleak. 5.

Guide for Writers: Latin Phrases It’s a matter of taste and style, but not long ago American writers attempted to demonstrate their credentials to the world by including Latin and French phrases within works. A dash of Latin was expected of the moderately educated throughout the Western world. annus mirabilis - wonderful year arbiter elegantiae - judge of the elegant; one who knows the good things in life bona fides - good faith; credentials carpe diem - sieze the day; enjoy the present Book trailers Book trailers are a fairly recent phenomenon in the publishing industry. They originated less than ten years ago, based on the venerable institution of the movie trailer, but have only really taken off since the development of video sharing sites such as Youtube. Book trailers are a form of advertising for a book. Initially, they were literally sales pitches.

Top Fantasy Books and Series : Sword Blog You are here: Home / Fantasy / Top Fantasy Books and Series Top Fantasy Books and Series-List of best 10 fantasy book series. Fantasy sagas i love the most. 25 Banned Books That You Should Read Today Almost since the dawn of publishing, books have been banned for one reason or another. Many notable banned books are also compelling reads from classic or contemporary literature. This list summarizes 25 of the most controversial banned books from throughout history. #1 To Kill a Mockingbird by Harper Lee Harper Lee's only novel is considered by many to be among the greatest works of fiction in American literature. Yet the story of young Scout Finch and her father, Atticus, has often been banned.

Books That Will Induce A Mindfuck Here is the list of books that will officially induce mindfucks, sorted alphabetically by author. Those authors in bold have been recommended by one or more people as being generally mindfucking - any books listed under their names are particularly odd. You're welcome to /msg me to make an addition to this list. And finally, although he's way down at the bottom, my personal recommendation is definitely Howard Zinn's A People's History of the United States, as it turns the ultimate mindfuck: inverting the world-view of our entire culture, and it is non-fiction. The Second Time You Fall In Love With Someone The second time you fall in love with someone, you’re going to feel so relieved. When you get your heart broken for the first time, you can’t imagine loving someone else again or having someone else love you. You worry about your ex finding love before you do, you worry about being damaged goods.

Imaginary Friends by Terry Brooks, Speakman Press Good, but not up to usual standards of Terry Brook's work This story is the basis of one of Terry Brook's most memorable characters that has always stuck with me since I first met him. The story starts out well but seems to have been finished in a hurry. Hunter S. Thompson Essay. “Open Letter To The Youth Of Our Nation” 1955 Hunter wrote this essay in 1955 for The Athenaeum Literary Association’s bound yearbook, it won third prize in The Nettleroth contest. Great writing for a 18 year old, and makes for a funny read too. Young people of America, awake from your slumber of indolence and hark-en the call of the future! Do you realise you are rapidly becoming a doomed generation? Do you realise that the fate of the world and of generations to come rests on your shoulders?

8 Books Every Intelligent Person Should Read A Reddit.com user posed the question to Neil deGrasse Tyson: “Which books should be read by every single intelligent person on the planet?” Below, you will find the book list offered up by the astrophysicist, director of the Hayden Planetarium, and popularizer of science. Where possible, we have included links to free versions of the books, all taken from our Free Audio Books and Free eBooks collections. Or you can always download a professionally-narrated book for free from Audible.com. Details here. mental_floss Blog & 10 Works of Literature That Were Really Hard to Write Instead of judging works of literature based on their artistic merit, we’ve decided to rank them by degree of difficulty. These 10 authors may not be Shakespeare, but they sure had vaulting ambitions. 1. The Story That Will Never Be an e-BookGadsby by Ernest Vincent Wright Some might call Gadsby a “love” story. But Ernest Vincent Wright wouldn’t have used that word.

YA Dystopian Books What’s on my bookshelf ? 4 Today I would like to recommend a few books belonging to the very trendy genre of Dystopian fiction for Young Adults. David Bowie's 'Space Oddity' Recreated As Children's Book [Read + Listen ComicsAlliance readers should by now be familiar with the work of Andrew Kolb. We’ve spotlighted the illustrator’s work a couple of times before, first for his groovy representations of The Walking Dead and other beloved artifacts of pop culture, and most recently for his work with some of comics, film and television’s most famous double-acts like The Muppets’ Bunson and Beaker and Kevin Smith’s Jay and Silent Bob, but in the style of carved wooden blocks. Kolb’s latest work is more ambitious, telling the story of David Bowie’s classic “Space Oddity” in the style of an illustrated children’s book. The tale of doomed Major Tom plays out in Kolb’s bright and retro animation style, giving a face to the legendary Bowie character and making the conclusion that much sadder.Released in 1969 and considered a classic today, David Bowie’s “Space Oddity” is obviously a reference to Stanley Kubrick’s “2001: A Space Odyssey.”