Elements of the Gothic Novel 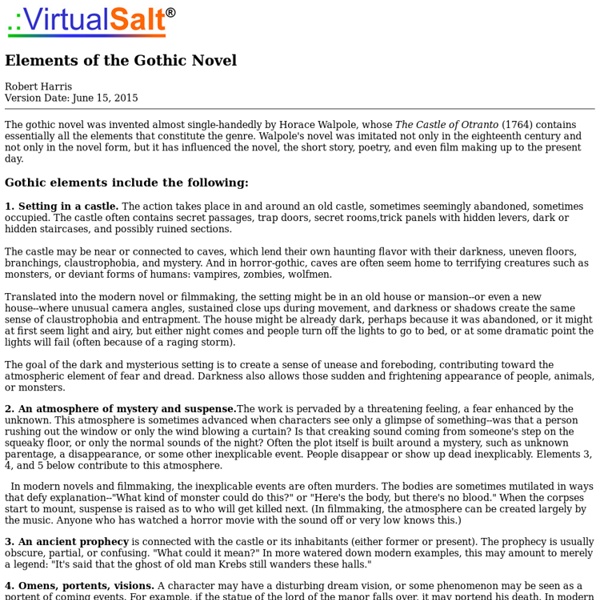 Robert Harris Version Date: June 15, 2015 The gothic novel was invented almost single-handedly by Horace Walpole, whose The Castle of Otranto (1764) contains essentially all the elements that constitute the genre. Walpole's novel was imitated not only in the eighteenth century and not only in the novel form, but it has influenced the novel, the short story, poetry, and even film making up to the present day. Gothic elements include the following: 1. The castle may be near or connected to caves, which lend their own haunting flavor with their darkness, uneven floors, branchings, claustrophobia, and mystery. Translated into the modern novel or filmmaking, the setting might be in an old house or mansion--or even a new house--where unusual camera angles, sustained close ups during movement, and darkness or shadows create the same sense of claustrophobia and entrapment. 2. In modern novels and filmmaking, the inexplicable events are often murders. 3. 4. 5. 6. 7. 8. 9. 10. 1. 2. 3. 4. 5. 6. Related:  dianemarycowan2 • Gothic

How to Write a Gothic Tale | Writerly Life Ghosts, vampires, and werewolves are experiencing a resurgence in fiction nowadays. Vampire lit is back in fashion, as is the kind of bleak, gripping horror writing that first found popularity with Edgar Allen Poe almost two centuries ago. Gothic writing is masterful when it’s done right, and it’s important to know the rules in order to do this genre justice. Mood and Terror The first thing to remember about gothic writing is that it is all about crafting mood and terror. Read and study the masters When embarking on a genre work like a gothic story, it’s important to study the masters and understand how they do what they do. After the jump: understanding the rules of the gothic genre. Understand the rules of gothic writing. The unique and often disquieting aspect of gothic stories is that they create a whole world similar to our own but a bit off. Remember this strong sense of justice when you try writing a gothic story.

Conventions of the Gothic Genre There are a number of techniques, devices and conventions common to a great deal of Gothic literature: WEATHER: used in a number of ways and forms, some of these being: Mist - This convention in Gothic Literature is often used to obscure objects (this can be related to the sublime) by reducing visibility or to prelude the insertion of a terrifying person or thing; Storms - These frequently accompany important events. Flashes of lightening accompany revelation; thunder and downpours prefigure the appearance of a character or the beginning of a significant event; Sunlight - represents goodness and pleasure; it also has the power to bestow these upon characters.THE SUBLIME: The definition of this key term has long been a contested term, but the idea of the sublime is essential to an understanding of Gothic poetics and, especially, the attempt to defend or justify the literature of terror. This of course is a selection of only a few elements of a novel, and no text is this predictable.

Gothic motifs What does it mean to say a text is Gothic? Professor John Bowen considers some of the best-known Gothic novels of the late 18th and 19th centuries, exploring the features they have in common, including marginal places, transitional time periods and the use of fear and manipulation. Professor John Bowen discusses key motifs in Gothic novels , including the uncanny, the sublime and the supernatural. Gothic is a literary genre, and a characteristically modern one. Strange places It is usual for characters in Gothic fiction to find themselves in a strange place; somewhere other, different, mysterious. Front cover for 1919 edition of Dracula Castle Dracula from the cover of the thirteenth edition of Bram Stoker’s Dracula, 1919. View images from this item (1) Great Expectations illustrated by John McLenan Miss Havisham and the decaying Satis House from Charles Dickens’s Great Expectations, illustrated by John McLenan, 1861. View images from this item (16) Clashing time periods Melmoth the Wanderer

Writer's Block -- Practical Tips for Beating Your Writer's Block Most writers will have trouble with writer's block at some point in their lives. The possible reasons for writer's block are myriad: fear, anxiety, a life change, the end of a project, the beginning of a project... almost anything, it seems, can cause that debilitating feeling of fear and frustration. Fortunately there are as many ways to deal with writer's block as there are causes. The items below are only suggestions, but trying something new is the first step toward writing again. 1. Carve out a time to write and then ignore the writer's block. 2. In fact, don’t be hard on yourself at all while writing. 3. Stephen King, a famously prolific author, uses the metaphor of a toolbox to talk about writing in On Writing, intentionally linking it to physical work. 4. Writer's block could be a sign that your ideas need time to gestate. 5. Many writers, understandably, have trouble doing this on their own. 6. Write about your anxieties regarding writing or creativity. 7. 8. 9. 10.

Why do we read scary books? | Children's books Some of my favourite books when I was 13 or so were horror stories. Point Horror, Stephen King, Bram Stoker, James Herbert… all the names you’d expect to see on the list. I used to sneak into second-hand bookshops and buy anthologies of vampire stories, smuggling them home in my bag or my coat because my mother didn’t approve. “They’ll scare you,” she always said. Fear is one of our primal emotions: it’s one that is hardwired into us, just as it is in all animals. We’re a peculiar lot, when you think about it: we work so hard to make our world, our environment safer… and then we actively seek out things that will make us afraid. When I asked my corner of Twitter what scared them (in a very quick and - admittedly - deeply unscientific survey), I got answers ranging from “human cruelty” to “being insignificant”. The difference is that if you’re faced with a sabre-tooth tiger, a spear is going to make you feel a lot better about your odds of survival. Simple. We’re curious about fear.

Gothic fiction Genre or mode of literature and film that combines fiction and horror, death, and at times romance The name Gothic, which originally referred to the Goths, and then came to mean "German",[2] refers to the Gothic architecture of the medieval era of European history, in which many of these stories take place. This extreme form of Romanticism was very popular throughout Europe, especially among English- and German-language writers and artists.[3] The English Gothic novel also led to new novel types such as the German Schauerroman and the French roman noir.[4] The Castle of Otranto (1764) is regarded as the first Gothic novel. Early Gothic romances[edit] Horace Walpole[edit] Walpole published the first edition disguised as a medieval romance from Italy discovered and republished by a fictitious translator. Clara Reeve[edit] Reeve's contribution in the development of the Gothic fiction, therefore, can be demonstrated on at least two fronts. Ann Radcliffe[edit] Matthew Lewis[edit] Romantics[edit]

Write to Done Arouse your creativity Electric flesh-arrows … traversing the body. A rainbow of color strikes the eyelids. Creativity is like sex. I know, I know. The people I speak of are writers. Below, I’ve exposed some of their secret tips, methods, and techniques. Now, lie back, relax and take pleasure in these 201 provocative ways to arouse your creativity. Great hacks from Merlin Mann of 43 Folders A brief history of goths - Dan Adams Examining the developments of the “goths” and “gothic” provides a way to explore the major artistic movements in Western history. Start with the Classical Age. Because most primary documents were created by the Romans, they carry a heavy bias against the Goths. For example, the Ludovisi Battle Sarcophagus depicts the virtuous Romans slaughtering the barbarous Goths. The Abbey of St. Giorgio Vasari is often credited as the first art historian. Horace Walpole was a Romantic during the Industrial Age. What about contemporary goths?