Horror. Holly Lisle's Vision by Teresa Hopper © 2002, Teresa Hopper Anyone who writes or reads much horror knows that a stereotype exists amongst some non-horror readers. 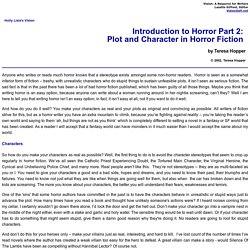 Horror is seen as a somewhat inferior form of fiction – trashy, with unrealistic characters who do stupid things to sustain unfeasible plots. It isn’t seen as serious fiction. And how do you do it well? Characters. 25 Things You Should Know About Writing Horror. I grew up on horror fiction. 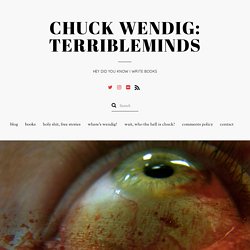 Horror Plot Cliches. In the wonderful world of horror, it’s easy to creep in to many done-to-death plots. 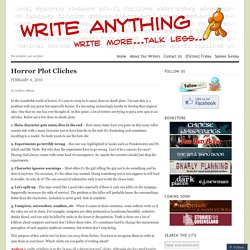 I’m sure this is a problem with any genre but especially horror. It’s becoming increasingly harder to develop that original idea. Horror Factor - Horror Sub-Genres. Horror Sub-Genres by Paula Guran (Reprinted with permission from and with special thanks to the folks at Dark Echo Writer's Workshop) 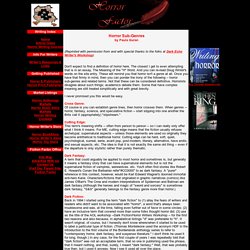 How to Write Horror. “Boo!” 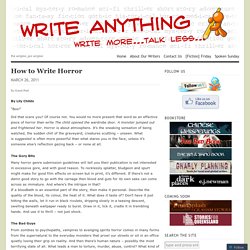 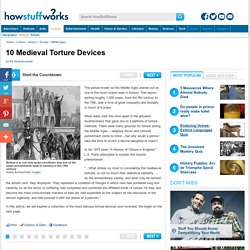 A pillory is a­ set of two parallel wooden boards clasped together, with holes for the neck and wrists. When opened, the victim places his or her head and arms through the holes. Then the pillory is closed, and the victim can't possibly escape. The pillory itself does no harm to the victim, though it's certainly not comfortable. The entire apparatus was usually placed on a stage in a public place -- the entire point was to humiliate and shame the victim for his or her crimes.

While a spell in the pillory often only lasted an hour or two, usually during the busiest times of day, its effect really depended on the nature of the crime and the mood of the crowd. Sometimes, the vengeful crowd was the least of the victim's concerns. The next section features one of the most infamous torture devices of all time, plus its lesser known cousin. 10 Gruesome Torture Devices Used In Modern Times. Creepy If someone asked you to think of torture devices, you would probably picture some crazy medieval contraption. 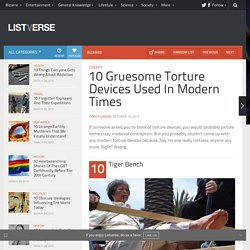 But you probably couldn’t come up with any modern torture devices because, hey, no one really tortures anyone any more. Let Me Explain to You a Thing, Torture. We Track the Tag iRantrpc. Creepy Site Generator. Medieval Torture. Medieval Torture During the Middle Ages, torture was a very common way to punish offenders. 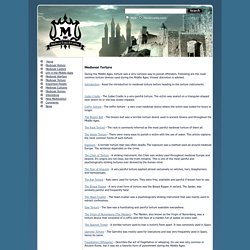 Following are the most common torture devices used during the Middle Ages. 10 Most Frightening Torture Techniques from the Middle Ages (medieval torture methods) By David Morton The Middle Ages were not a nice period to live in by our cushy modern standards. 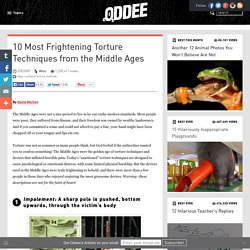 Most people were poor, they suffered from disease, and their freedom was owned by wealthy landowners. And if you committed a crime and could not afford to pay a fine, your hand might have been chopped off or your tongue and lips cut out. Horror Factor - Horror Writing Articles for the Serious Horror Writer. How to Write a Horror Story: 11 steps. Adjunct Assistant Professor of English This article was co-authored by Christopher Taylor, PhD. 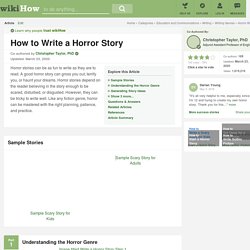 Christopher Taylor is an Adjunct Assistant Professor of English at Austin Community College in Texas. He received his PhD in English Literature and Medieval Studies from the University of Texas at Austin in 2014. Co-authors: 169 Updated: March 23, 2020. Story Lite Productivity Software for writing and editing. This is an interactive Story software example file that has been published on the web. How To Write Horror, ghost, vampire, zombie fiction by Maria Z. Horror fiction is one of the popular book genres that evokes feelings of terror and suspense in its readers. This very fear differs from person to person as every reader interprets a piece of horror writing differently.

This is probably because readers have differing phobias and past experiences which relate to the horror in different ways. Motives For Murder. How to write about zombies. Last night I took a writing class called "How to Write a Zombie Fiction or Horror Novel. " I found out about this class from one of the 80,000 "daily deal" newsletters I now subscribe to and, naturally, my curiosity was piqued. There were a lot of fans of "The Walking Dead" (both comic book series and TV show) in class and the author who was teaching said the comic is what inspired him to write a zombie book as well as the Romero movies and WORLD WAR Z, both mentioned in reverent tones.

The author, who resembled a more realistic James Franco, had worked in TV and in book publishing before his writing career had taken off. He described being around editors as "the most exciting thing" about working in publishing. Stephen King: The 'Craft' Of Writing Horror Stories. Stephen King’s 20 Tips for Becoming a Frighteningly Good Writer. Have you ever wished you could peer inside the mind of one of the greatest writers in the world and find out exactly what makes them tick? Well… here’s your chance. Stephen King has published 49 novels, all of them bestsellers. How to write an evil character.

My subject today is how to write a really, really evil character. When I say evil, I'm talking about nature, not about motive. Evil goes beyond the normal catalysts that drive human beings to commit murder and mayhem--those catalysts can include jealousy, anger, rage, fear, even a distorted kind of love. When I think of evil-doers (and I have to credit the former Prez for that phrase), I'm talking about psycho-killers. Cold-ass weirdos. As writers, sometimes we need to create those kind of unabashed, dead-at-the-seams, evil characters. Back in August, we had a week of posts on this blog about our favorite villains. Just because it's true, doesn't mean it works on the page. Basic Tips To Make Scarier & Better Creepypasta & Horror Creeps. Creepypastas and horror stories are extremely popular, but those who write them frequently end up with monsters, spooks, and killers that are more ho-hum than horrific.

Here are a few tips to help you make your bugbears, baddies, and monsters more effective at giving people the heebie-jeebies. Remember, creepypasta is at its heart horror set in our world, whether it's the recent past, the present day, or the not-too-distant future. Things About Death, Dying, & Murder Writers Need To Know. Mindsets & Rationales That Lend Well To Villainy. Tips For Writing & Maintaining A Horror Atmosphere. This article has been contributed by Alexis Feynman, also known as "J.

" More Tips For Horror. Since the spooky season ain't over yet, here's some more advice on creating horror scenarios and writing horror monsters, whether for a story or a roleplaying campaign. Be aware that visual cues can be subjective, or may require context to become scary.