How to play the Midnight Man Game with Rules 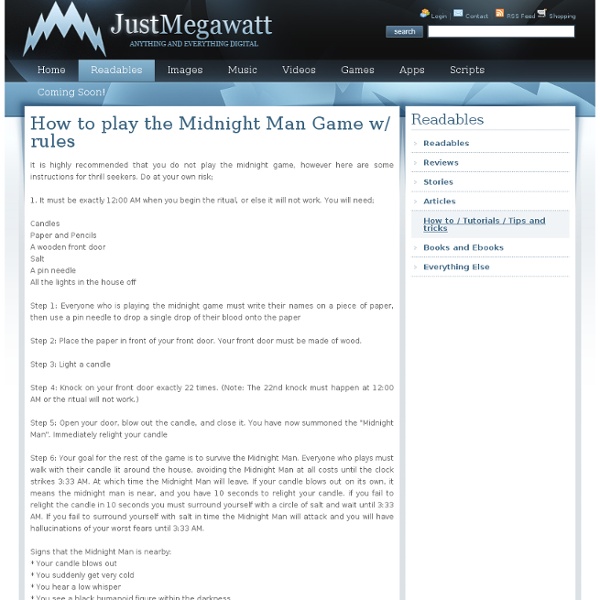 It is highly recommended that you do not play the midnight game, however here are some instructions for thrill seekers. Do at your own risk; 1. It must be exactly 12:00 AM when you begin the ritual, or else it will not work. You will need; Candles Paper and Pencils A wooden front door Salt A pin needle All the lights in the house off Step 1: Everyone who is playing the midnight game must write their names on a piece of paper, then use a pin needle to drop a single drop of their blood onto the paper Step 2: Place the paper in front of your front door. Step 3: Light a candle Step 4: Knock on your front door exactly 22 times. Step 5: Open your door, blow out the candle, and close it. Step 6: Your goal for the rest of the game is to survive the Midnight Man. Signs that the Midnight Man is nearby: * Your candle blows out * You suddenly get very cold * You hear a low whisper * You see a black humanoid figure within the darkness

Lucid Dreaming/Using Dream stabilization[edit] Once you are able to dream lucidly, you may find that it is difficult to stay in the dream; for example, you may wake instantly or the dream may start “fading” which is characterized by loss or degradation of any of the senses, especially vision. Alternatively, a new lucid dreamer could easily forget that they are in a dream, as a result of the shock of the sensation. Don't worry if you wake immediately after becoming lucid. As you gain more experience of becoming lucid, it will come as less of a shock and you’ll be less likely to wake up.

A Modern Pop-Up Children's Storybook That Uses Augmented Reality Australia-based Resin is a company that has recently developed a modern pop-up book using augmented reality. By taking an existing storybook, “Two Left Feet”, they have brought it to life using 3D animation and augmented reality. To experience the fun, one does not need to own the storybook.You are also able to print out images to experience the same augmented reality. The app recognizes artwork from the book and brings it to life with beautiful moving animations. It is not reliant on reading QR codes.

Popular Applications By Category Got it! Like most websites AlternativeTo uses cookies for various features. We hope that is ok, otherwise feel free to disable cookies in your browser. More info Cookie Consent plugin for the EU cookie law Desktop, Tablet & Mobile Cinnamon Roll Pancakes Updated 9/22/11 to Add: If you’re coming here to sample these delicious Cinnamon Roll Pancakes, you just might like the latest recipe that I’ve posted for Pumpkin Cinnamon Roll Pancakes too. And Gingerbread- Cinnamon Roll Pancakes too. Enjoy! How One Teacher Turned Sixth Grade Into An MMO Editor’s Note: Ben Bertoli is a long-time Kotaku reader and commenter, a lifetime, dedicated video gamer and a sixth-grade teacher in Indiana. He reached out to Kotaku this past week to share the story of how he turned his class into a role-playing game. The enthusiasm and motivation of the children in Bertoli’s class evoke the success stories seen in gamified experiences such as Fitocracy.

Not quite the king of the swingers yet... Baby gorilla Kukena takes his first tentative (very wobbly) steps under mum's watchful eye By Tom Gardner Published: 20:19 GMT, 9 May 2012 | Updated: 06:43 GMT, 11 May 2012 Every mother knows there's a time when you have to let go and watch your children make their own way in life. And it seems there's nothing different in the animal kingdom, as western lowland gorilla Salome keeps a watchful maternal eye on her seven-month-old son Kukena who leaves her side for the first time since birth. The little primate summoned the courage to go off and explore his enclosure in Bristol Zoo. Finding his feet: Little seven-month-old Kukena ventures away from his mother's side for the first time at Bristol Zoo since birth

6 Insane Discoveries That Science Cant Explain We like to feel superior to the people who lived centuries ago, what with their shitty mud huts and curing colds by drilling a hole in their skulls. But we have to give them credit: They left behind some artifacts that have left the smartest of modern scientists scratching their heads. For instance, you have the following enigmas that we believe were created for no other purpose than to fuck with future generations. World’s First Perpetual Motion Machine? Can this machine operate forever? Since at least the 12th century, man has sought to create a perpetual motion machine; a device that would continue working indefinitely without any external source of energy. A large scientific contingent thinks such a device would violate the laws of thermodynamics, and is thus impossible. Could it be that as a race, we don’t fully understand the laws of physics and such a device may indeed be possible? What would the ramifications be if we could actually build a perpetually moving device? Norwegian artist and mathematician Reidar Finsrud is an outside the box thinker that has devised a machine that he believes achieves true perpetual motion.

Rebecca Black Donating 'Friday' Proceeds to Japan YouTube singing star Rebecca Black is using her overnight fame for a good cause. The 13-year-old singer, who touched off a nerve with her budget hit, "Friday," told Us magazine she will donate the profits of her iTunes song to emergency relief efforts in Japan as well as to her school. "I am donating money to my school and Japan," she recently revealed. The Anaheim, Calif., teen's song, which has been dubbed by many as "the worst song ever" for its monotonous lyrics and heavy use of auto-tune, has attracted more than 40 million views on YouTube. "My school, El Rancho Charter, is really where I started focusing on singing," she said. "I feel bad.

One red paperclip The paperclip that Kyle MacDonald traded for a house. The website One red paperclip was created by Canadian blogger Kyle MacDonald, who bartered his way from a single red paperclip to a house in a series of fourteen online trades over the course of a year.[1] MacDonald was inspired by the childhood game Bigger, Better, and the site received a considerable amount of notice for tracking the transactions. "A lot of people have been asking how I've stirred up so much publicity around the project, and my simple answer is: 'I have no idea'", he told the BBC.[2] Trading timeline[edit] MacDonald made his first trade, a red paper clip for a fish-shaped pen, on July 14, 2005.