Can there be delight in horror? 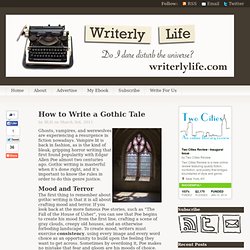 Vampire lit is back in fashion, as is the kind of bleak, gripping horror writing that first found popularity with Edgar Allen Poe almost two centuries ago. Gothic writing is masterful when it’s done right, and it’s important to know the rules in order to do this genre justice. Mood and Terror The first thing to remember about gothic writing is that it is all about crafting mood and terror. If you look back at the more famous Poe stories, such as “The Fall of the House of Usher”, you can see that Poe begins to create his mood from the first line, crafting a scene of gray clouds, creepy old houses, and an otherwise forboding landscape. Read and study the masters When embarking on a genre work like a gothic story, it’s important to study the masters and understand how they do what they do.

The Gothic Novel: What is Gothic Literature? In many ways, the Gothic novel is a direct response to eighteenth century ideals of formal realism, which is why it is essential to understand formal realism first before defining Gothic literature. 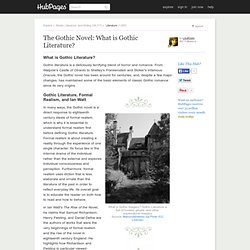 Formal realism is about creating a reality through the experience of one single character. Its focus lies in the internal drama of the individual rather than the external and explores individual consciousness and perception. Furthermore, formal realism uses diction that is less elaborate and ornate than the literature of the past in order to reflect everyday life. Its overall goal is to educate the reader on both how to read and how to behave. The Gothic Novel. David De Vore Anne Domenic Alexandra Kwan Nicole Reidy I. 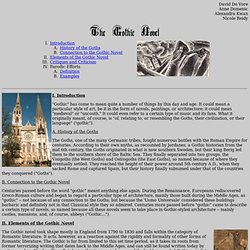 Introduction "Gothic" has come to mean quite a number of things by this day and age. It could mean a particular style of art, be it in the form of novels, paintings, or architecture; it could mean "medieval" or "uncouth. " It could even refer to a certain type of music and its fans. Uncle Montague's Tales of Terror. The Rime of the Ancient Mariner. The Rime of the Ancient Mariner - FULL Audio Book - by Samuel Taylor Coleridge. Chris Priestley's Guide to Horror. Any list of favourite books is, by nature, temporary. 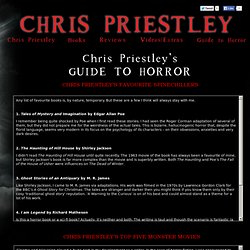 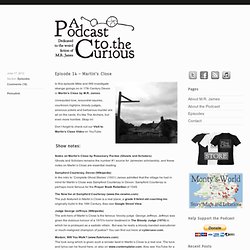 Sampford Courtenay, Devon (Wikipedia) In the intro to ‘Complete Ghost Stories’ (1931) James admitted that the village he had in mind for Martin’s Close was Sampford Courtenay in Devon. Elements of the Gothic Novel. Robert Harris Version Date: June 15, 2015 The gothic novel was invented almost single-handedly by Horace Walpole, whose The Castle of Otranto (1764) contains essentially all the elements that constitute the genre. 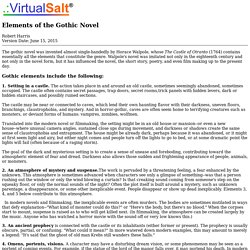 Walpole's novel was imitated not only in the eighteenth century and not only in the novel form, but it has influenced the novel, the short story, poetry, and even film making up to the present day. Gothic elements include the following: 1. Setting in a castle. The castle may be near or connected to caves, which lend their own haunting flavor with their darkness, uneven floors, branchings, claustrophobia, and mystery. Translated into the modern novel or filmmaking, the setting might be in an old house or mansion--or even a new house--where unusual camera angles, sustained close ups during movement, and darkness or shadows create the same sense of claustrophobia and entrapment. The Castle of Otranto by Horace Walpole. Search eText, Read Online, Study, Discuss. The Castle of Otranto : Horace Walpole. <div style="padding:5px; font-size:80%; width:300px; background-color:white; margin-left:auto; margin-right:auto; border:1px dashed gray;"> Internet Archive's<! 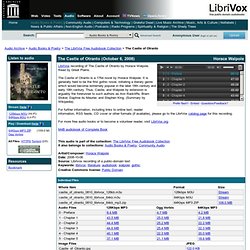 --'--> in-browser audio player requires JavaScript to be enabled. It appears your browser does not have it turned on. Please see your browser settings for this feature. </div> LibriVox recording of The Castle of Otranto by Horace Walpole. The Castle of Otranto is a 1764 novel by Horace Walpole. For further information, including links to online text, reader information, RSS feeds, CD cover or other formats (if available), please go to the LibriVox catalog page for this recording. For more free audio books or to become a volunteer reader, visit LibriVox.org.