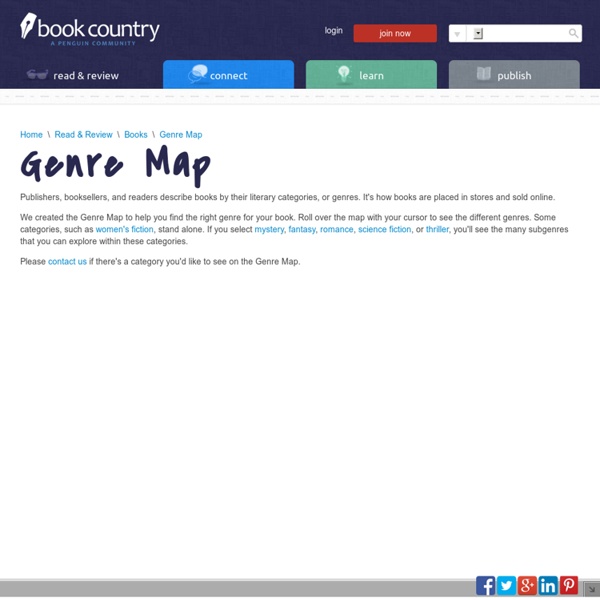 Publishers, booksellers, and readers describe books by their literary categories, or genres. It's how books are placed in stores and sold online. We created the Genre Map to help you find the right genre for your book. Roll over the map with your cursor to see the different genres. Some categories, such as women's fiction, stand alone. If you select mystery, fantasy, romance, science fiction, or thriller, you'll see the many subgenres that you can explore within these categories. Please contact us if there's a category you'd like to see on the Genre Map.

Paris Review Daily - Blog, Writers, Poets, Artists - Paris Review Donald Barthelme would’ve been, and should be, eighty-three today. It would be an exaggeration to say that I feel the absence of someone whom I never met—someone who died when I was three—but I do wonder, with something more than mere curiosity, what Barthelme would have made of the past twenty-odd years. These are decades I feel we’ve processed less acutely because he wasn’t there to fictionalize them: their surreal political flareups, their new technologies, their various zeitgeists and intellectual fads and dumb advertisements. Part of what I love about Barthelme’s stories is the way they traffic in cultural commentary without losing their intimacy, their humanity. The Best Science Fiction Books (According to Reddit) Recently, someone asked Reddit for a list of the best science fiction books of all time. Being a fan of sci-fi, and wanting to expand my own reading list, I thought it would be helpful to tally the results and preserve them here for future reference. I've also included selected quotes from the comments, as well as my own notes on the books I've already read. PS: All book images in this post are copyright Amazon, and were retrieved using my Big Book Search Engine. So, without further ado, here are the Greatest Sci-Fi Books of All Time, ordered by upvote count: Dune

My collection of funny emails from my inbox. Subject: 5 MINUTE MANAGEMENT COURSE Lesson 1: A man is getting into the shower just as his wife is finishing up her shower, when the doorbell rings. Umberto Eco’s Antilibrary: Why Unread Books Are More Valuable to Our Lives than Read Ones by Maria Popova How to become an “antischolar” in a culture that treats knowledge as “an ornament that allows us to rise in the pecking order.” “It is our knowledge — the things we are sure of — that makes the world go wrong and keeps us from seeing and learning,” Lincoln Steffens wrote in his beautiful 1925 essay.

Top 7 Comics For Anxious Millennials Navigating early adulthood seems a more difficult journey than ever. A hundred years ago, all anyone was expected to accomplish was to get a job, marry, have kids, and then die. Our current, collective adulthood is proving a little more complicated than that, what with astronomical student debt, a wobbly housing market, a generation disillusioned with monogamy and marriage, and the internet. We don’t even have our forefathers’ short life expectancy to rely on when things get super tough. With that in mind, here’s a few comics every modern adult can relate to. External Tip - 10 Advanced Photoshop Tutorials You Should See In this category we want to give you an advice to other great sites, where you can get a lot of very useful information, inspirations and materials. Here I collected 10 great Photoshop tutorials, which can help you to expand your skills. Create a Devastating Tidal Wave in Photoshop

The world's most difficult books: how many have you read? 'Fantastically convoluted' … Nightwood by Djuna Barnes. Photograph: Oscar White/Corbis Two and a half. I have read two and a half of the 10 most difficult books ever written, as selected by Emily Colette Wilkinson and Garth Risk Hallberg of the Millions after three years' research. The pair started their quest to identify the toughest books out there back in 2009, looking for "books that are hard to read for their length, or their syntax and style, or their structural and generic strangeness, or their odd experimental techniques, or their abstraction".

The Psychology of Writing and the Cognitive Science of the Perfect Daily Routine Reflecting on the ritualization of creativity, Bukowski famously scoffed that “air and light and time and space have nothing to do with.” Samuel Johnson similarly contended that “a man may write at any time, if he will set himself doggedly to it.” And yet some of history’s most successful and prolific writers were women and men of religious daily routines and odd creative rituals. (Even Buk himself ended up sticking to a peculiar daily routine.) The Absolute Best Comics And Graphic Novels of 2014! But The Love Bunglers earns its place by chronicling a new story starring L&R's star Maggie Chascarillo. Now a middle-aged landlord, the weight of Maggie's past — seen in three decades of Hernandez comics — gets full impact in this new chapter in her life and relationships, a story told with warmth but also honesty. Time may have worn down Maggie, but it has done nothing to Hernandez's phenomenal storytelling skills. Co-signed — and despite what the usual dudebro suspects would have you believe, Los Bros Hernandez have been creating a genuinely diverse and nuanced gallery of women (NOT zeppelin-titted wank fantasies) with genuine love and respect for over thirty years. This should be the norm in comics, but all too often it isn't.

Relationship Rules Human beings crave intimacy, need to love and be loved. Yet people have much trouble doing so. It's clear from the many letters I get that lots of folks have no idea what a healthy relationship even looks like. Because I care about these things, and care about the environments children grow in, I'm using this space as an attempt to remedy the problem—again. From many sources and many experts, I have culled some basic rules of relationships.