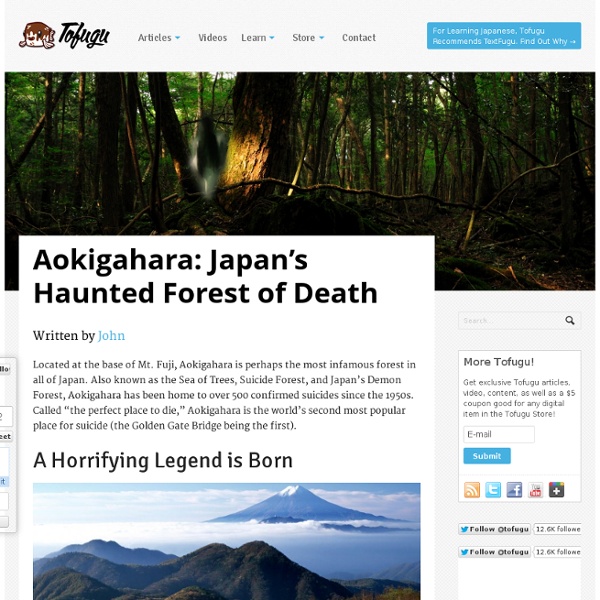 Located at the base of Mt. Fuji, Aokigahara is perhaps the most infamous forest in all of Japan. Also known as the Sea of Trees, Suicide Forest, and Japan’s Demon Forest, Aokigahara has been home to over 500 confirmed suicides since the 1950s. A Horrifying Legend is Born Legend says that this all started after Seicho Matsumoto published a novel by the name of Kuroi Kaiju (Black Sea of Trees) in 1960. Wataru Tsurumui’s controversial 1993 bestseller, The Complete Suicide Manual, is a book that describes various modes of suicide and even recommends Aokigahara as the perfect place to die. Japan’s suicide rate is already bad enough as it is, and having this forest and suicide manual on top of it all is pretty terrible. Legend has it that in ancient times families would abandon people in the forest during periods of famine when there was not enough food to go around. In addition, there are many other ghost and demon stories associated with the forest. Terrifying Topography Destination Truth Related:  Perspectives Inside and Outside of Japan

Kunoichi: Female Ninja Spies of Medieval Japan Most Westerners think of ninjas as black-masked men with swords who appear from the shadows and strike without warning. But not all ninja assassins were male, and not all of them walked in shadow. Female ninjas, known as kunoichi, formed an important part of medieval shinobi clans. Like their male counterparts, kunoichi trained in combat, disguise, and stealth, though their missions and function differed from those of male shinobi in several important ways. Disguises and Tactics Shinobi (which is the Japanese pronounciation of the characters Westerners read as “ninja”) worked as spies as well as assassins. Medieval Japan was ruled and dominated by men of the samurai class. A male shinobi might assume the role of a samurai retainer or an artisan, but those positions seldom allowed the assassin unfettered access to his target. Shinobi training for both genders focused on utilizing the ninja’s personal strengths to best advantage. Special Weapons Visibility—or lack thereof Respect

Yggdrasil In Norse mythology, Yggdrasil (/ˈɪɡdrəsɪl/; from Old Norse Yggdrasill, pronounced [ˈyɡːˌdrasilː]) is an immense tree that is central in Norse cosmology, in connection to which the nine worlds exist. Conflicting scholarly theories have been proposed about the etymology of the name Yggdrasill, the possibility that the tree is of another species than ash, the relation to tree lore and to Eurasian shamanic lore, the possible relation to the trees Mímameiðr and Læraðr, Hoddmímis holt, the sacred tree at Uppsala, and the fate of Yggdrasil during the events of Ragnarök. Name The generally accepted meaning of Old Norse Yggdrasill is "Odin's horse", meaning "gallows". This interpretation comes about because drasill means "horse" and Ygg(r) is one of Odin's many names. A third interpretation, presented by F. Attestations Poetic Edda In the Poetic Edda, the tree is mentioned in the three poems Völuspá, Hávamál and Grímnismál. Völuspá Hávamál Grímnismál Prose Edda Theories Shamanic origins

#RiseAbove - Basketball Documentary Film Series by Jordan Psychological facts I’ve decided to start a series called 100 Things You Should Know about People. As in: 100 things you should know if you are going to design an effective and persuasive website, web application or software application. Or maybe just 100 things that everyone should know about humans! The order that I’ll present these 100 things is going to be pretty random. So the fact that this first one is first doesn’t mean that’s it’s the most important.. just that it came to mind first. Dr. Tokyo Damage Report » JAPAN BOOK REVIEW #12 : absolute erotic, absolute grotesque by Mark Driscoll the author arbitrarily invents his own meanings for those two words. Ero refers to evil capitalists manipulating peoples’ natural urges for a better life, using biological drives to make fat profits. Guro refers to the cruelty of colonial slave labor and drug addiction. Main points of the book: 1) Techniques that were invented in the far-flung colonies by Japanese yakuza and criminals then got copied and institutionalized by the “legitimate” Japanese colonial governments, and then finally got implemented in mainland Japan during the war years. 2) Most of the "sophisticated, modern" cultural trends of Tokyo in the `20s and `30s actually started in the very rural colonies. Gangster capitalism"Sexology"Industrialized prostitution (karayuki to ianfu to jappayuki)Japanese-style FeminismFascism and centrally planned war economy Grotesque as entertainment (particularly war porn and drugs) Anyway, instead of a review of the book, I decided to do something different this time: 1880s – 1890s – 1910s:

10 Creepy Mysteries You Haven't Heard Of Mysteries We have had numerous mystery lists in the past, but, due to a recent question I asked on the Listverse fanpage on facebook, I decided to put together a new one. This list covers mysteries that are, hopefully, not well known to most of you (but including one previously published item with updated information), and ones that have something creepy about them. I hope you enjoy the list and be sure to mention other creepy mysteries in the comments. In 1930, aged 4, Shanti Deva from Delhi, India, told her parents that she had once lived in a place called Muttra (now known as Mathura), that she had been a mother of three, who died in childbirth, and that her previous name was Ludgi. In 2008, a creepy gnome was caught on film in Argentina. He said: “We were chatting about our last fishing trip. Other locals have since come forward to say they have spotted the gnome, and the town has been covered in a pall of fear ever since the first sighting. Some believe that the bridge is haunted.

Bolivian Salt Flat Creates Amazing Walking on Water Illusion Located at 11,995 feet above sea level, Salar de Uyuni is a mystifying salt flat in Altiplano, Bolivia that has a reflective nature when covered with water. The briny layer of land, created through the rainy season, transforms the otherwise plated pockets of dry salt into a giant mirror, giving the illusion of walking on water. Though the salty desert is quite beautiful when left alone, the introduction of water leads to an unbelievably surreal result. It is especially exquisite on cloudy days where it looks as though visitors are taking a stroll in the sky. The miraculous metamorphosis of the 4,086 square mile expanse of salted terrain, which happens to be the largest salt flat on earth, is all at once mind-boggling and breathtaking. There's an inexplicable beauty to the infinite presence of a blue sky filled with puffy, white clouds. via [Who Designed It?

Sweet science presents Science comes up with a lot of awesome stuff, and you don't need a Ph.D, a secret lab, or government funding to get your hands on some of the coolest discoveries. We've got a list of 11 mostly affordable gifts that are guaranteed to blow your mind, whether or not you're a science geek. Click on any image to see it enlarged. 1. Also known as frozen smoke, Aerogel is the world's lowest density solid, clocking in at 96% air. Aerogel isn't just neat, it's useful. Price: $35 2. Inside these sealed glass balls live shrimp, algae, and bacteria, all swimming around in filtered seawater. EcoSpheres came out of research looking at ways to develop self-contained ecosystems for long duration space travel. Price: $80 3. NASA has been trying to figure out how to get a sample of rock back from Mars for a while now. Every once in a while, a meteorite smashes into Mars hard enough to eject some rocks out into orbit around the sun. Price: $70+ 4. Price: $150 5. So what's next year's new color going to be? 6.

Seedy and Sublime: The Ero Guro Dystopia of Japanese Noir Posters Stills and poster from Sejin Suzuki films In the 1960s and 70s, the Japanese film industry (Nikkatsu Studio to be precise) headlined a golden age for East Asian exploitation noir. After years of censorship, first outlined by Japanese Imperial government during the Second World War and later by the occupying Allies, exploitation noir films became a mode of subcultural expression and perhaps even an outlet for social critique. Just as cover art played a major role in selling pulp magazines and fiction in the West, the film posters of post-industrial Japan exhibited talent that was often lacking in the actual production. The eye-popping images of hardened yakuza, rogue detectives, and doe-eyed damsels (often in the nude) are unforgettable, though the same cannot be said about the underfunded, poorly-scripted pinku eiga (softcore exploitation genre known as “pink films.”) A Certain Killer’s Key (1967) and Battles Without Honor and Humanity (1973) Images via Hanafuda and Lost Video Archive

Oddity Archive The Blue Fugates Troublesome creek in the state of Kentucky, U.S.A was not famous for any trouble as the name suggests, but for an odd family that lived in this wilderness. Troublesome Creek is known worldwide for the Fugates family that dwelt there. The Fugates were known as the ‘blue people’ and were an oddity because they were ... Goddess Saraswati Goddess Saraswati, fondly known as Saraswati Maa or His Shakti, is the Goddess of music, science, arts and technology. Flights from Virgin America | Virgin Flights Terms and Conditions: *All Main Cabin fares are one-way and require a 21-day advance purchase. Travel for DAL-SFO, DAL-LAX, and DAL-DCA must occur between October 13, 2014 and November 19, 2014. Travel for DAL-LGA must occur between October 28, 2014 and November 19, 2014. Travel for all other markets must occur between May 18, 2014 and June 11, 2014 or September 3, 2014 and November 19, 2014. Lowest sale fares are available only on certain itineraries.

The secret world of Disneyland Disneyland may look like a straightforward theme park. But there's a secret world hidden behind the balloons, castles and cotton candy - a place where wild cats roam the park at midnight, Mickey Mouse hides in the wallpaper, and movie stars sip martinis behind closed doors. Feline security It's not easy keeping the grounds of Disneyland utterly spotless, as well as free of unwanted pests. Every night after closing time, 200 feral cats are released into the park to help keep the rodent population under control. Hidden Mickeys At Disneyland, the round-eared Mickey Mouse emblem is everywhere. Cocktails behind closed doors Disneyland is dry - unless you can manage to get your name on the list at Club 33. Trick of the eye Things are not always as they appear at Disneyland. Always on stage At Disneyland, a janitor isn't a janitor - he's a 'cast member'. A light stays on When construction was underway in the early 1950s, Walt didn't want to miss a moment of his dream coming to life.

19th-Century Samurai Training Text Deciphered A training text, used by a martial arts school to teach members of the bushi (samurai) class, has been deciphered, revealing the rules samurai were expected to follow and what it took to truly become a master swordsman. The text is called Bugei no jo, which means "Introduction to Martial Arts" and is dated to the 15th year of Tenpo (1844). Written for samurai students about to learn Takenouchi-ryū, a martial arts system, it would have prepared students for the challenges awaiting them. "These techniques of the sword, born in the age of the gods, had been handed down through divine transmission. The text includes quotes written by ancient Chinese military masters and is written in a formal kanbun style, a system that combines elements of Japanese and Chinese writing. Among its many teachings, the text tells students to show great discipline and not to fear the enemy's numbers. Last century of the Samurai Samurai rules One notable rule, "Do not let the school's teachings leak out!"

Related:
Related:  Perspectives Inside and Outside of Japan