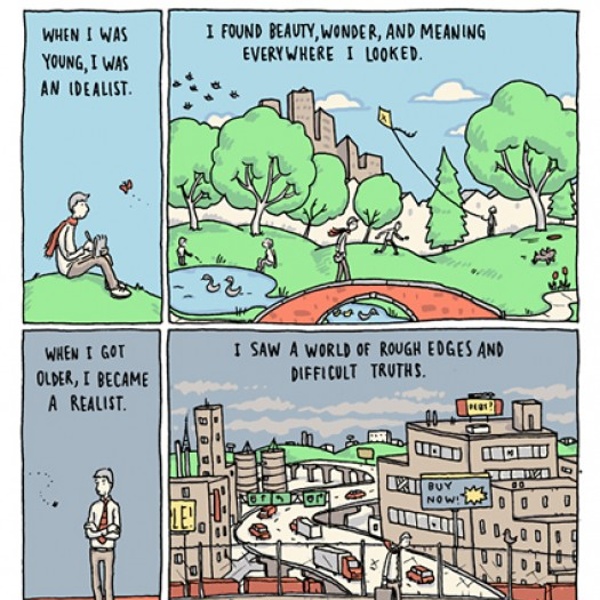 PHILOSOPHY POSTERS by Max Temkin | News | Design | Arts | Tech | Entertainment | Latest News | The Skunk Pot Philosophy is the study of general and fundamental problems, such as those connected with existence, knowledge, values, reason, mind, and language. Philosophy is distinguished from other ways of addressing such problems by its critical, generally systematic approach and its reliance on rational argument. The word “philosophy” comes from the Greek φιλοσοφία (philosophia), which literally means “love of wisdom“. In this case, Max Temkin, the artist, wanted to create posters with quotes that motivated people to think ‘different‘. More about Max Temkin’s philosophy posters Also check out AMAZING SLEEPING BABIES PHOTOGRAPHY and MAPPING STEREOTYPES

Your Daily Life in GIFs (5.14.12 When you break up with someone: When someone on Facebook is fishing for compliments: When you’re in the club with a friend: When your arm falls asleep and you try to use it: When someone tricks you into watching a gross video: When you’re obviously joking, but someone thinks you’re being serious: When the bell rings and the teacher tries to give you homework: When you read the ingredients of your favorite junk food: When your lips are chapped and you don’t have chapstick: When you go to the bathroom after someone else: When you were little and your mom yelled, “Who wants ice cream?” When someone gives a really boring speech: When your friend introduces you to someone for the first time, then leaves for a phone call: When an update requires you to restart the computer: When your friend gets a weird new haircut: When you touch the bathroom doorknob and it’s wet: When you’re almost done with a book and you realize there aren’t enough pages left for all the things that need to happen: <–Back to Home Page

Awesome Minimalist Disney Posters FTW Something about minimalist art just looks great on movie posters. Combine that with Disney movies and you get a whole new edge. You might think most of these posters are for some dark, avant-garde indie film, not a cute animated kid’s flick. Also, be sure to check out: Minimalist Posters of Cult Classics and Awesome Minimalist Book Covers FTW (image) Liverpool graphic designer Rowan Stocks-Moore designed these. The above (and others) are all available in poster form on Rowan Stocks-Moore’s Etsy account He has recently had a lot of requests for his stuff so expect to wait about 14 working days for a print, longer for United States customers. Awesome Minimalist Disney Posters FTW Words as Images by Ji Lee Whenever we read a news story, book, letter, or any other form of text our brain relates specific words with previously seen images. By accessing our past memories, like a hard drive, our brain is able to create a visual illustration simply out of words. Taking this one step further, Ji Lee eliminates the need for our brain to do this process. Ji Lee takes popular words and brings them to life by adding a sense of character, fun and playfulness to them. “When we were children, letters were like fun toys. Today we will feature creative examples from Ji’s book titled “Word As Image.” “This project started nearly twenty years ago as an assignment in my typography class at art school. Anyone can create a word as image. Note: All Rights Reserved by Ji Lee. Check out our previous articles: Did you enjoy this article?

The Chromatic Typewriter | Colossal - StumbleUpon Washington-based painter Tyree Callahan modified a 1937 Underwood Standard typewriter, replacing the letters and keys with color pads and hued labels to create a functional “painting” device called the Chromatic Typewriter. Callahan submitted the beautiful typewriter as part of the 2012 West Prize competition, an annual art prize that’s determined by popular vote. I don’t know how practical painting an image with a color typewriter is, but if Keira Rathbone can do it… (via dark silence in suburbia)

Funny monkey experiment Posted on February 7, 2012 in Humor If you’re new here, you may want to subscribe to our RSS feed or follow us on Facebook or Twitter . Thanks for visiting! Rate this Post Loading ... So... Check this out on our Partner Network World in 2000 as Predicted in 1910 | SadAndUseless.com Illustrations by French artist Villemard in 1910 of how he imagined the future to be in the year 2000. In the 21st century, in order to control traffic jams in the air, there will be more and more flying policemen. Firemen will be equipped with “bat wings” to be able to easily access top floors and roofs. Just one for the road… Wars will be fought by “combat cars”. Schools will be equipped with audio books. Horses will be so rare that people will pay to see them. You’ll be able to send mail just by dictating it into loudspeaker. Heating with Radium. Building sites will be equipped with automatic devices and machines. Makeup will be applied just by pressing few buttons. Hair salon. Electric train from Paris to Beijing. Rescue plane. Tailor. Airship. Motorized roller skates. Video-telegraph. Police will use armored bicycles (motorcycles?) Listening to an audio-newspaper. Spy helicopters. The avenue of the Opera, Paris.

Beautiful Watercolor Landscapes (12 pieces) Z.L. Feng grew up in Shanghai and began painting at the young age of seven. After experimenting with all kinds of different mediums, he finally settled on a favorite - watercolor. The artist always revered the medium because of its level of difficulty. One of Feng's favorite places to find inspiration is in the countryside of Virginia's New River Valley. Before coming to the U.S. in 1986, Feng received his BFA degree from Shanghai Teacher’s University and taught in its art department for four years. Z.L. DarkCopy - Simple, full screen text editing