What are Moths? - Types Of Insects. Moths are butterfly’s cousin that is not as pretty or fast as its relation. 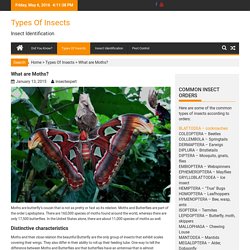 Moths and Butterflies are part of the order Lepidoptera. There are 160,000 species of moths found around the world, whereas there are only 17,500 butterflies. In the United States alone, there are about 11,000 species of moths as well. Distinctive characteristics Moths and their close relation the beautiful Butterfly are the only group of insects that exhibit scales covering their wings. General statements Moths have mostly very dull colors on their wings, but there are select species with beautiful colors and patterns. Immatures Caterpillars are given its name to due to the fact they are the larvae of baby-like form of the moth and butterfly.

What are Hoppers? - Types Of Insects. Homoptera, known as Hoppers, is a very large and diverse order. 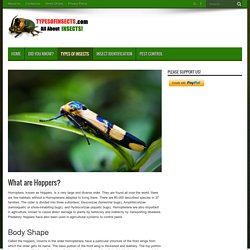 They are found all over the world; there are few habitats without a Homopterans adapted to living there. There are 80,000 described species in 37 families. The order is divided into three suborders: Geocorizae (terrestrial bugs), Amphibicorizae (semiaquatic or shore-inhabiting bugs), and Hydrocorizae (aquatic bugs). Homopterans are also important in agriculture, known to cause direct damage to plants by herbivory and indirectly by transporting diseases. Predatory Hoppers have also been used in agricultural systems to control pests. Body Shape. Parts of An Insect: All You Have To Know About Insect Structure - Types Of Insects.

All insects has three main body region, namely: the head, thorax and the abdomen. 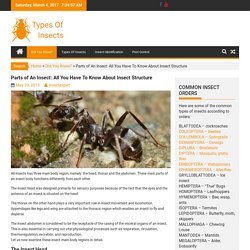 These main parts of an insect body functions differently from each other. The insect head was designed primarily for sensory purposes because of the fact that the eyes and the antenna of an insect is situated on the head. The thorax on the other hand plays a very important role in insect movement and locomotion. Appendages like legs and wing are attached to the thoracic region which enables an insect to fly and disperse. What Do Termites Look Like? - Types Of Insects. Termites are nature’s best centralized and self-organized scavengers. 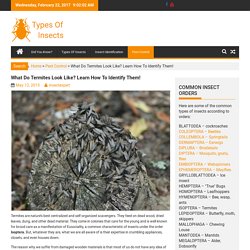 They feed on dead wood, dried leaves, dung, and other dead material. They come in colonies that care for the young and is well known for brood care as a manifestation of Eusociality, a common characteristic of insects under the order Isoptera. How to Get Rid of Little Black Ants? - Types Of Insects. Let me guess what you’re up to. 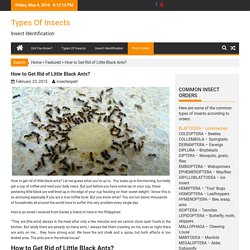 You wake up in the morning, hurriedly get a cup of coffee and read your daily news. But just before you have some sip on your cup, these pestering little black are well lined up in the edge of your cup feasting on their sweet delight. I know this is so annoying especially if you are a true coffee lover. But you know what? You are not alone; thousands of households all around the world have to suffer this very problem every single day. Here is an email I received from Daniel, a friend of mine in the Philippines: “They are [the ants] always in the meal after only a few minutes and we cannot store open foods in the kitchen.

Are you like Daniel who had been suffering from these pestering ants and seeking professional advice? Note: Although chemical control (insect pest control using insecticides) is the method known to eradicate insects in minimal time and effort, I consider at as the last resort of control. Preventive measures Eradicative measures Appearance. The Telltale of Springtails - Types Of Insects. What Do Bed Bugs Look Like? Basic Information About Bedbugs - Types Of Insects. We all hate bed bugs. 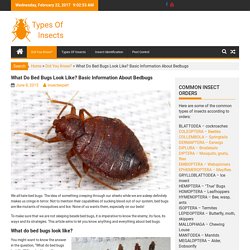 The idea of something creeping through our sheets while we are asleep definitely makes us cringe in terror. Not to mention their capabilities of sucking blood out of our system, bed bugs are like mutants of mosquitoes and lice. None of us wants them, especially on our beds! To make sure that we are not sleeping beside bed bugs, it is imperative to know the enemy; its face, its ways and its strategies. This article aims to let you know anything and everything about bed bugs. You might want to know the answer in the question, “What do bed bugs look like?” What are House Flies? - Types Of Insects.

Flies are known as the biggest pest/annoyance with the littlest impact upon a house. 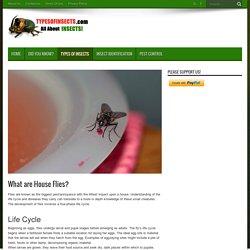 Understanding of the life cycle and diseases they carry can translate to a more in depth knowledge of these small creatures. The development of flies involves a four-phase life cycle. Life Cycle Beginning as eggs, flies undergo larval and pupal stages before emerging as adults. The fly’s life cycle begins when a fertilized female finds a suitable location for laying her eggs. Fly Facts More than 100 pathogens are associated with the house fly, including Salmonella, Staphylococcus, E. coli and Shigella. Depending on the species, the life expectancy of a fly is eight days to two months or, in some cases, up to a year.Flies belong to the order Diptera, meaning two wings. What Do Beetles Eat? - Facts About Beetles - Types Of Insects. If you want to describe beetles on a very artistic manner, you would probably go with ‘the biggest insect in a shining armor’. 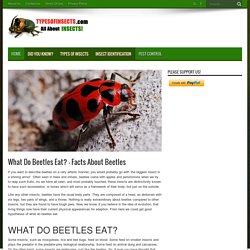 Often seen in trees and shrubs, beetles come with apples and persimmons when we try to reap such fruits. As we have all seen, and most probably touched, these insects are distinctively known to have such exoskeleton, or bones which will serve as a framework of their body- but just on the outside. Like any other insects, beetles have the usual body parts.

They are composed of a head, an abdomen with six legs, two pairs of wings, and a thorax. Nothing is really extraordinary about beetles compared to other insects, but they are found to have tough jaws. Earwigs: Facts vs Fiction - Types Of Insects. When we talk about insects, especially when you are from the western countries, it is impossible to not put earwigs in our conversation. 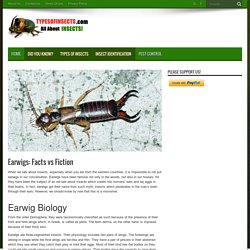 Earwigs have been famous not only in the woods, but also in our houses; for they have been the subject of an old tale about insects which crawls into humans’ ears and lay eggs in their brains. In fact, earwigs got their name from such myth; insects which penetrates in the man’s brain through their ears. However, we should know by now that this is a misnomer.

From the order Dermaptera, they were taxonomically classified as such because of the presence of their front and hind wings which, in Greek, is called as ptera. The term derma, on the other hand, is imposed because of their thick skin.