Honey Bees Are Struggling with Their Own Pandemic. As the COVID-19 pandemic makes grimly clear, cities are arguably humanity’s greatest invention, but densely populated metropolises also make us vulnerable to the rapid spread of disease. 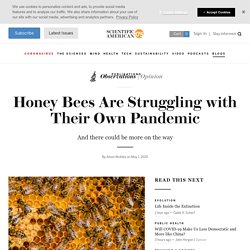 Yet humans aren’t the only species that face this problem. Drone Disguised as Hummingbird Captures Incredible Footage of Monarch Butterfly Swarm. It's not very often that I watch a video online and react by literally gasping and audibly saying "wow. 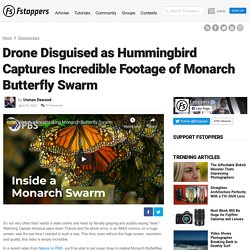 " Watching Captain America stare down Thanos and his whole army, in an IMAX cinema, on a huge screen, was the last time I reacted in such a way. This time, even without the huge screen, resolution, and quality, this video is simply incredible. The Insect Apocalypse Is Here. Near the center of the old city, a paper sign, not much larger than a business card, identifies the stolid headquarters of the society whose research caused so much commotion. When it was founded, in 1905, the society operated out of another building, one that was destroyed when Britain bombed the city during World War II. (By the time the bombs fell, members had moved their precious records and collections of insects, some of which dated back to the 1860s, to an underground bunker.)

Nowadays, the society uses more than 6,000 square feet of an old three-story school as storage space. MEDIA SERVICE » The Insect Apocalypse Is Here. ENVIRONMENT, SCIENCE, 3 Dec 2018 Brooke Jarvis – The New York Times What does it mean for the rest of life on Earth? 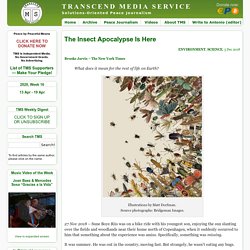 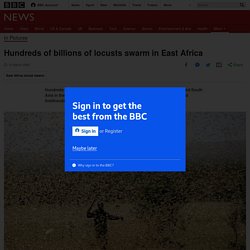 Image copyright Reuters The insects, which eat their own body weight in food every day, are breeding so fast numbers could grow four hundredfold by June. In January, the UN appealed for $76m (£59m) to tackle the crisis. That figure has now risen to $138m. But so far, only $52m has been received, $10m of which has come this week from the Bill & Melinda Gates Foundation. Image copyright AFP The main threats are in East Africa and Yemen, as well the Gulf states, Iran, Pakistan and India. Image copyright Getty Images Most recently, locusts have been seen in the Democratic Republic of Congo and swarms have arrived in Kuwait, Bahrain and Qatar and along the coast of Iran. Insect Sting Pain Rating Index With Hilariously Entertaining Descriptions - Earthly Mission. Of ants and men: Ant behavior might mirror political polarization. Could the division of labor in an anthill be driven by the same social dynamics governing the gap between liberals and conservatives? 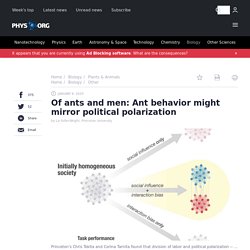 That was the surprising question tackled by Princeton biologists Chris Tokita and Corina Tarnita. "Our findings suggest that division of labor and political polarization—two social phenomena not typically considered together—may actually be driven by the same process," said Tokita, a graduate student in ecology and evolutionary biology. A 6,000-year-old fruit fly gave the world modern cheeses and yogurts. Historians often trace the dawn of human civilisation back 10,000 years, when Neolithic tribes first settled and began farming in the Fertile Crescent, which stretches through much of what we now call the Middle East. 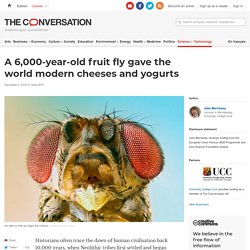 Prehistoric peoples domesticated plants to create the cereal crops we still grow today, and in the Zagros mountains of Iran, Iraq and Turkey, sheep, goats and cows were bred from their wild relatives to ensure a steady supply of meat and milk. But around the same time as plants and animals were tamed for agriculture, long before anyone even knew of microscopic life, early humans were domesticating microbes too. The domesticated diet Domestication is evolution directed by a human hand. After wild parents have bred, farmers retain the offspring with properties that are beneficial for future breeding.

Woman Finds An Incredible Bug Who's Almost Too Beautiful To Be Real. Bumblebees learn to roll balls for reward. Ants Bring Flower Petals To Cover Dead Bumblebee In What Looks Like 'Funeral' I don’t often align myself with products but this is one that I just had to share! 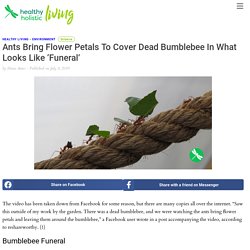 Some of you may already know years ago, I was diagnosed with Multiple Sclerosis. I can still recall what it felt like to have my life change overnight… I went from an Executive Director of a non-profit organization, running marathons, rock climbing, hiking canyons and kayaking to being completely bedridden and staring at a wall for 15 hours a day. A Comprehensive Guide to Yellow Stripey Things.

Having a backyard means getting out to enjoy the sunshine and fresh air with family and friends. 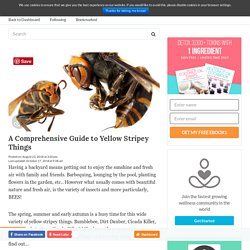 Barbequing, lounging by the pool, planting flowers in the garden, etc.. However what usually comes with beautiful nature and fresh air, is the variety of insects and more particularly, BEES! The spring, summer and early autumn is a busy time for this wide variety of yellow stripey things. Bees Can Do Complex Additions And Subtractions. Honeybees are amazing! 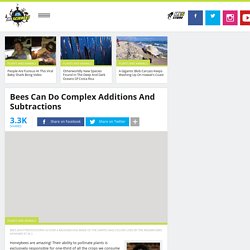 Their ability to pollinate plants is exclusively responsible for one-third of all the crops we consume daily. Not only that but they have a complex language, they can communicate to the other bees via dance, and they can explain to each other how far and where flowers are. On top of all this, they make delicious honey. An animated chart of 42 North American butterflies. Last week’s infographic was pretty science intensive, so this one is a bit more frivolous for a change. 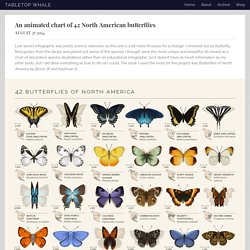 I checked out six butterfly field guides from the library and picked out some of the species I thought were the most unique and beautiful. Why Does This Bizarre Arachnid Look Like It Has A Dog's Head? A bizarre arachnid that has a dog-like head has been snapped in a series of photographs that shows just how wild and wonderful our natural world is. Shared on Twitter by science writer Ferris Jabr, the images were taken by scientist and photographer Andreas Kay (you can check out his Flickr page with other wonderful creatures here). The animal is an arachnid, not a spider, called the bunny harvestman, and scientifically named Metagryne bicolumnata. The images were snapped in Ecuador in July 2017. The Insect Apocalypse Is Here. Bee swarms work like giant brains. - Hashem Al-Ghaili. Researchers observe ants giving medical assistance to their injured comrades  Ants are incredibly smart and powerful! - Hashem Al-Ghaili. Tiny Bugs Are Having Sex on Your Face Right Now. Floating Fire Ant Colonies Have Their Own Way Of Escaping The Floods In Houston.

A strange side effect of the floods occurring in Houston due to Harvey is the resulting animal behavior. There have been alligators lurking in backyards, snakes swimming in the streets and, now, floating rafts of fire ants are popping up in Texas. Check it out: Error loading player: No playable sources found This is actually common behavior during flooding. Fire ants spend most of their lives in colonies in the soil but when there is major flooding (as has been the case recently, thanks to Harvey), they meet on the highest ground and band together to form a pontoon. Absurd Creature of the Week: The Spanish Fly Is Real, and It's Ridiculously Dangerous. In 1869, a French military doctor got what we can confidently say was one of the stranger cases of his career.

A group of soldiers were complaining of weakness, stomach problems, dry mouths, and aggressively persistent erections. The problem, it seemed, was that they’d been eating frogs that had themselves been eating the fabled Spanish fly. In reality, it's not a fly. Nature Blows My Mind! Macro photos show jewel-like details of butterfly wings. Mechanisms of collective decision-making in bees. Log In. Set your meetings, phone calls and emails aside, at least for the next several minutes. Crafty Ants Form Conga Lines to Drag Millipedes to Doom. This Is Why Insects Rule the World. Who Invented Agriculture First? It Sure Wasn't Humans. Various species of ants engage in some kind of agriculture.

Here, a leaf-cutter ant gathers food for its fungus farm. Mark Bowler/Science Source. Romanian cave sealed for 5.5 million years is full of strange creatures. Earth - The world's largest spider is the size of a dinner plate. Flowers get an electrifying buzz out of visiting bees. When Wasps Are Given Colored Paper, They Build Rainbow Nests. BBC - Earth News - Ant mega-colony takes over world. Why do honeybees love hexagons? - Zack Patterson and Andy Peterson. Subterranean Ant Cities are Far More Complex than Anyone Thought Possible. Dragonfly Planes ~ The Future of Flight. Listen to the lovely orchestra of crickets singing at human speed [audio] [updated.

World's largest aquatic insect specimen found in China. Ants Are Capable of Changing Their Priorities. The Most Beautifully Terrifying Spiders You Never Knew Existed. Macro Photographs of Singapore’s Most Unusual Insects and Arachnids by Nicky Bay.