INSECTS have six legs, antennae, and are segmented into 3 body parts. They are by far the most diverse animal group on the planet, making up 90% of all animals that have ever lived.

Though more ancient, ARACHNIDS are a much smaller group that only includes Spiders, Scorpions, Ticks, Mites, Camel Spiders, and Daddy Long-legs. Arachnids have eight legs and are segmented into 2 body parts. 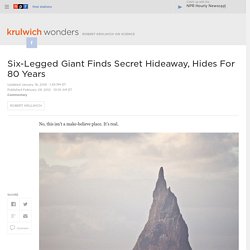 It's real. They call it "Ball's Pyramid. " It's what's left of an old volcano that emerged from the sea about 7 million years ago. A British naval officer named Ball was the first European to see it in 1788. It sits off Australia, in the South Pacific. Tinkerbella nana. The family Mymaridae includes more than 1,400 species of diminutive insects called fairyflies. 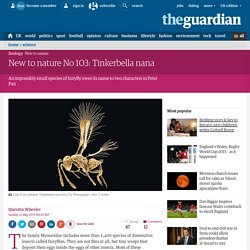 They are not flies at all, but tiny wasps that deposit their eggs inside the eggs of other insects. Most of these parasitoids are found in tropical latitudes and the southern hemisphere, where they attack unborn offspring of true bugs, beetles, flies, barkflies and dragonflies. The family includes the smallest of all known insects, Dicopomorpha echmepterygis, from Central America, whose males are a mere 139μm That is smaller than quite a few single-celled protists.

Put another way, 175 males could be lined up end to end in the space of an inch. The common name fairyfly was no doubt inspired by the small size, delicate form and wispy wings with long posterior fringes. Egyptian Giant Solpugids (Camel Spider) Camel spiders became an Internet sensation during the Iraq war of 2003, when rumors of their bloodthirsty nature began to circulate online. 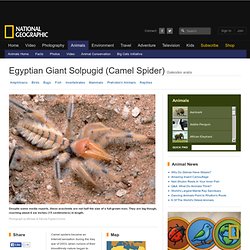 Many tales were accompanied with photos purporting to show spiders half the size of a human. For many years, Middle Eastern rumors have painted camel spiders as large, venomous predators, as fast as a running human, with a voracious appetite for large mammals. The myths are untrue. These creatures do not actually eat camels' stomachs or sleeping soldiers, and they are not so large—but the real camel spider is still an amazing predator. Concrete Poured Into Ant Colony Reveals Insect Megalopolis. 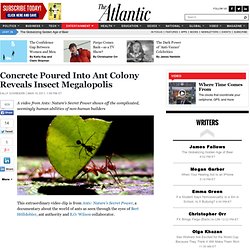 Wilson collaborator. Concrete was poured into an giant underground ant megalopolis, which acts as a mold. After the concrete hardened, scientists carefully excavated it to reveal the structure of the ant's elaborate "city-state": Everything looks like it has been designed by﻿ an architect, a single mind, but of course that isn't true. It's kind of grown-up reverse ant farm. Video link here. Via SwissMiss. Whip Scorpion. We've seen the elegant Scorpion with their often rather dainty pincers, now let's see their relatives, the chunky Whip Scorpions with their own brutal, barbarous claws. 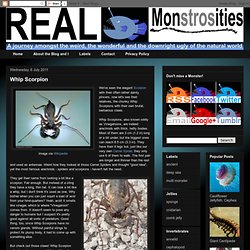 Whip Scorpions, also known oddly as Vinegaroons, are indeed arachnids with thick, hefty bodies. Most of them are 3 cm (1.2 in) long or a bit under, but the biggest ones can reach 8.5 cm (3.3 in). They have their 8 legs but, just like our very own Camel Spider, they only use 6 of them to walk. The first pair are longer and thinner than the rest and used as antennae. Weird how they looked at those Camel Spiders and thought "good idea", yet the most famous arachnids - spiders and scorpions - haven't felt the need.They get their name from looking a bit like a scorpion.

But check out those claws! With these they can grapple with small insect and millipede prey, though the bigger ones can also catch small vertebrates. Argentine Ants Use Chemical Warefare. Trevor Sorrells A native winter ant in the act of trying to apply a drop of the whitish toxin it can secrete from its abdomen onto an Argentine ant. 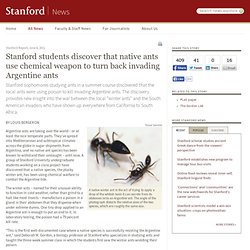 The angle of the photograph distorts the relative sizes of the two species, which are roughly the same size. Argentine ants are taking over the world – or at least the nice temperate parts. They've spread into Mediterranean and subtropical climates across the globe in sugar shipments from Argentina, and no native ant species has been known to withstand their onslaught – until now. Simple Eye in Invertebrates. Head of Polistes with two compound eyes and three ocelli A simple eye (sometimes called a pigment pit[1][2]) refers to a type of eye form or optical arrangement that contains a single lens. 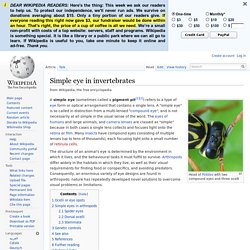 A "simple eye" is so called in distinction from a multi-lensed "compound eye", and is not necessarily at all simple in the usual sense of the word. The eyes of humans and large animals, and camera lenses are classed as "simple" because in both cases a single lens collects and focuses light onto the retina or film. Many insects have compound eyes consisting of multiple lenses (up to tens of thousands), each focusing light onto a small number of retinula cells. The structure of an animal's eye is determined by the environment in which it lives, and the behavioural tasks it must fulfill to survive.