What, When, And How To Share On Social Media. The currency of social media is the share. 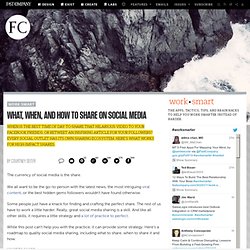 10 Words That Will Increase (or Decrease) Your Twitter. If you like social media data and science like this, my latest book “Zarrella’s Hierarchy of Contagiousness” is now only $1.99 in Kindle Edition (which will work on any computer or device). 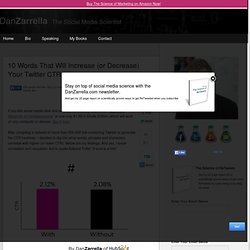 Buy it now! After compiling a dataset of more than 200,000 link-containing Tweets to generate the CTR heatmap, I decided to dig into what words, phrases and characters correlate with higher (or lower CTR). Below are my findings. And yes, I know correlation isn’t causation, but to quote Edward Tufte: “it sure is a hint.” 7 Powerful Facebook statistics you should know for a more engaging Facebook page. 2.7K Flares Filament.io 2.7K Flares × One of the things we focus on most at Buffer is the best time to post to Twitter and Facebook. 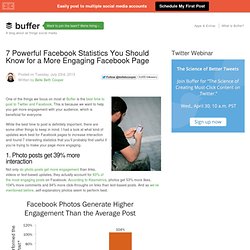 Stealthy Trick Makes Facebook Look Like an Excel Spreadsheet. Now you can get away with cruising around Facebook at work, even when your boss is peering over your shoulder. 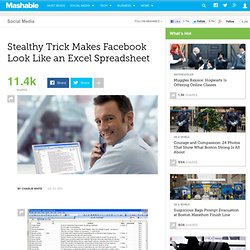 Well, as long as the boss doesn't look too closely. Even the laziest slacker can look busy in a jiffy with this interactive adaptation of many of Facebook's functions. Simply go to HardlyWork.in, click "Gimme Dem Spreadsheets," enter your Facebook credentials, and there's your Facebook newsfeed, all done up to look exactly like an Excel spreadsheet. It's not just a static graphic, either — HardlyWork.in lets you search for Facebook friends by entering names into the formula bar, load more items, check your newsfeed, wall, or tag photos, hover to see who liked a post, and there's even a boss switch (the spacebar) that immediately changes everything into a vast sea of spreadsheet numbers all nestled within their legitimate-looking cells.

The only thing missing? Kids hate-tweet Obama, echoing what they hear at home. The reelection of President Obama has hardly dimmed the enthusiasm of hardcore GOP racists. 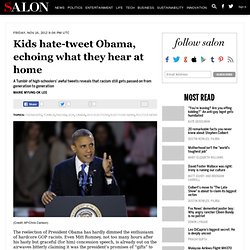 Even Mitt Romney, not too many hours after his hasty but graceful (for him) concession speech, is already out on the airwaves bitterly claiming it was the president’s promises of “gifts” to the unwashed 47 percent (read: minority) that got him reelected. How Did They Know I Unfollowed Them On Twitter? I had the experience recently of unfollowing someone on Twitter. 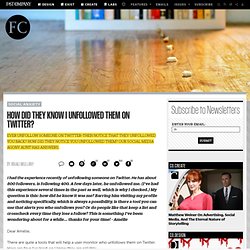 He has about 800 followers, is following 400. A few days later, he unfollowed me. The Twitter Trap. “This is the story of the next half-century,” Foer told me, “as we become effectively cyborgs.” 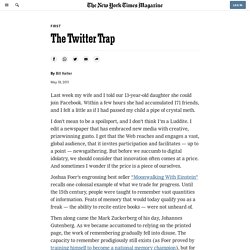 The 'Busy' Trap. Anxiety: We worry. 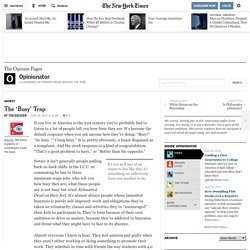 A gallery of contributors count the ways. If you live in America in the 21st century you’ve probably had to listen to a lot of people tell you how busy they are. It’s become the default response when you ask anyone how they’re doing: “Busy!” The Day Yahoo Decided I Liked Reading About Child Murder - Sarah Kendzior - Technology. Algorithms are shaping how we see the world around us, with big consequences. 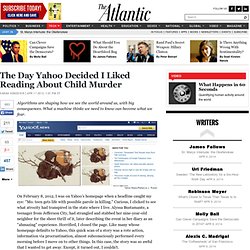 What a machine thinks we need to know can become what we fear. Yahoo News/Rebecca J. What Fuels the Most Influential Tweets? - Jared Keller - Technology. 4 Great Twitter Applications for Teachers Using Twitter In The Classroom. These tools offer free functionality that extend and enhance the possibilities for instructional uses of Twitter. 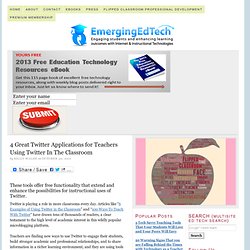 The Landscape: Twitter Tweet Sheet: Tips, Tricks, and Resources. " Twitter is a social network used by millions of people, and thousands more are signing up every day to send short messages to groups of friends. " - Pete Cashmore, @Mashable Lots of people see the value of Twitter in the workplace and are using this social networking tool to learn and share with each other about specific topics. I personally use Twitter to learn, share and connect with educators from all over the world. As a digital learning guru, I am helping the teachers in my middle school to use their Twitter accounts to start building their own Personal Learning Network (PLN). Here is a screencast that I created to help educators get started using Twitter In order to help others get started using Twitter , I have created my own Twitter Tweet Sheet. Twitter Tweet Sheet 1. Just copy and paste the website address that you want to share in your tweet into the box and it will shorten the link for you (freeing up extra space for your tweets). 2.

Where in the World Are Your Twitter Followers? TweepsMap Knows. The Spark of Genius Series highlights a unique feature of startups and is made possible by Microsoft BizSpark. If you would like to have your startup considered for inclusion, please see the details here. Name: TweepsMap Quick Pitch: TweepsMap provides a visual, interactive map of your Twitter followers by country, state or city. Genius Idea: Measures the effectiveness of Twitter campaigns by analyzing the locations of your followers. Knowing where your Twitter followers are located can not only feed your curiosity, but it can also help you measure the success of your social campaigns.

Launched in October, the tool helps Twitter users learn if their campaign is successful in a targeted region. How to Leverage Backchanneling & the Long Tail of Learning. Top 100 Tools for the Twittering Teacher.