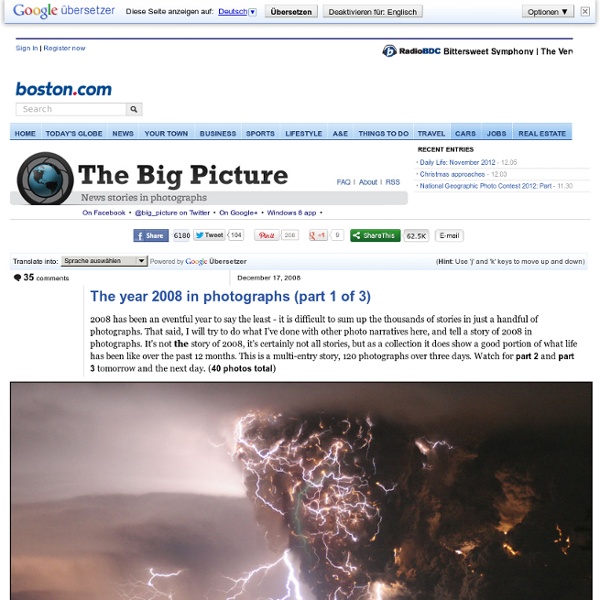 2008 has been an eventful year to say the least - it is difficult to sum up the thousands of stories in just a handful of photographs. That said, I will try to do what I've done with other photo narratives here, and tell a story of 2008 in photographs. It's not the story of 2008, it's certainly not all stories, but as a collection it does show a good portion of what life has been like over the past 12 months. This is a multi-entry story, 120 photographs over three days. Watch for part 2 and part 3 tomorrow and the next day. (40 photos total) Lightning bolts appear above and around the Chaiten volcano as seen from Chana, some 30 kms (19 miles) north of the volcano, as it began its first eruption in thousands of years, in southern Chile May 2, 2008.

How to Write Articles and Essays Quickly and Expertly Translations: Belorussian Introduction: Four Types of Discursive Writing From time to time people express amazement at how I can get so much done. Begin by writing - in your head, at least - your second paragraph (that would be the one you just read, above). But how do you write this paragraph? You have more options because there are four types of discursive writing. These are your choices of types of article or essay: Argument: convinces someone of something Explanation: tells why something happened instead of something else Definition: states what a word or concept means Description: identifies properties or qualities of things An argument is a collection of sentences (known formally as 'propositions') intended to convince the reader that something is he case. An explanation tells the reader why something is the case. A definition identifies the meaning of some word, phrase or concept. Finally, a description provides information about some object, person, or state of affairs. Argument:

Risky Business Comment Risky business Health-scare stories often arise because their authors simply don’t understand numbers Ben Goldacre Monday June 20, 2005 The Guardian Competence always looks better from a distance, but I have a confession to make: I’m a doctor, and I just don’t understand most of the stories on health risks in the news. Last week, we were told that red meat causes bowel cancer, and Nurofen causes heart attacks, but I was no wiser. Article continues HG Wells, 150 years ago, said that statistical thinking would one day be as important as the ability to read and write in a modern technological society. Let’s say the risk of having a heart attack in your 50s is 50% higher if you have high cholesterol: that sounds pretty bad. Natural frequencies are readily understandable, because instead of using probabilities, or percentages, they use concrete numbers, just like the ones you use every day to check if you’ve lost a kid on a coach trip, or got the right change in a shop.

Guardian Unlimited | Life | Don&#039;t dumb me down Talk about bad science here. OK, here's something weird. Every week in Bad Science we either victimise some barking pseudoscientific quack, or a big science story in a national newspaper. Now, tell me, why are these two groups even being mentioned in the same breath? Why is science in the media so often pointless, simplistic, boring, or just plain wrong? It is my hypothesis that in their choice of stories, and the way they cover them, the media create a parody of science, for their own means. Science stories usually fall into three families: wacky stories, scare stories and "breakthrough" stories. Wacky stories don't end there. A close relative of the wacky story is the paradoxical health story. At the other end of the spectrum, scare stories are - of course - a stalwart of media science. And last, in our brief taxonomy, is the media obsession with "new breakthroughs": a more subtly destructive category of science story. But enough on what they choose to cover. Why?

The Big Fish Ten years later, the story of Suck.com, the first great website By Matt Sharkey In August 1995, HotWired, the online publishing division of Wired magazine, was just 10 months old, making it, by the accelerated pace of the early web, both a pioneer and a latecomer. Prior to the HotWired launch in October 1994, Wired had an Internet presence, via Gopher, a text storage and retrieval system, and an email delivery mechanism, which processed requests for specific magazine articles. These systems were handled by a small cadre of engineers, who, with the burgeoning popularity of a new method of online publishing, the World Wide Web, and the release of the first graphical browsers, helped convince founder and publisher Louis Rossetto that Wired needed to get on the web. The obvious and popular solution was to sell advertising, but this being the web—and this being Wired—it would be a completely new breed of advertising. Steadman was hired as production director for all of HotWired.