Amazing Photograph Shows Lightning Hitting Plane Along The Path Of A Rainbow. German photographer Birk Mobius was extraordinarily lucky to capture lightning and a rainbow following the same path at the same time. 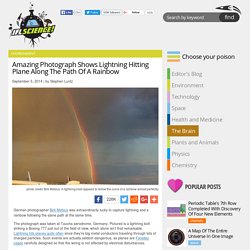 The photograph was taken at Taucha aerodrome, Germany. Pictured is a lightning bolt striking a Boeing 777 just out of the field of view, which alone isn't that remarkable. Nature Knows: Amazing macro-photography of individual snowflakes [10 Pictures] Photographer Alexey Kljatov takes incredible close-up photos of snowflakes in his backyard in Moscow. 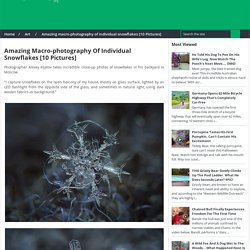 "I capture snowflakes on the open balcony of my house, mostly on glass surface, lighted by an LED flashlight from the opposite side of the glass, and sometimes in natural light, using dark woolen fabrics as background. " Source: Watch the Devil’s Finger Fungus Hatch Like a Xenomorph Egg. Ever seen a fungus hatch? 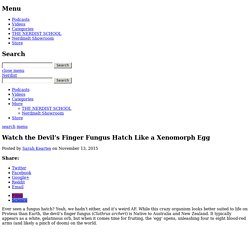 Yeah, we hadn’t either, and it’s weird AF. While this crazy organism looks better suited to life on Proteus than Earth, the devil’s finger fungus (Clathrus archeri) is Native to Australia and New Zealand. It typically appears as a white, gelatinous orb, but when it comes time for fruiting, the ‘egg’ opens, unleashing four to eight blood-red arms (and likely a pinch of doom) on the world.

While unappealing to us humans, what you’re seeing is actually a rather ingenious method of reproduction. The tentacles are laced with a foul smelling tissue, specially formulated to attract flies and other insects. 20 Orchids That Look Like Something Else - Beautiful Photos. Ophrys apifera, also known in Europe as the bee orchid, is a perennial herbaceous plant belonging to the family Orchidaceae. 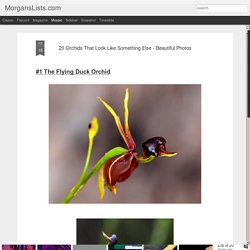 The name "Ophrys" derives from the Greek word ophrys, meaning "eyebrow", while the Latin specific epithet apifera means "bee-bearing" and refers to the bee-shaped lip of the orchid. Ophrys apifera is the only species of the genus Ophrys which preferentially practices self-pollination. The flowers are almost exclusively self-pollinating in the northern ranges of the plant's distribution, but pollination by the solitary bee Eucera occurs in the Mediterranean area. Indonesian Volcano Erupts Electric-Blue Lava. An Indonesian volcano has erupted what appears to be electric-blue lava flows, as photographed by Reuben Wu. 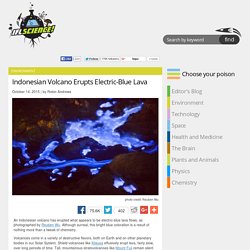 Although surreal, this bright blue coloration is a result of nothing more than a tweak of chemistry. Volcanoes come in a variety of destructive flavors, both on Earth and on other planetary bodies in our Solar System. What Plants Talk About - Documentary. MUST SEE: New York commuter shares photo of rare ‘Quadruple Rainbow’ GLEN COVE, New York — We’ve all seen a double rainbow, if not in real life then certainly on YouTube. 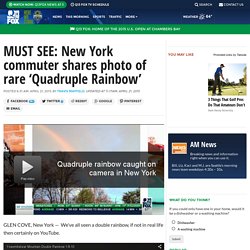 But Tuesday morning Amanda Curtis captured something that puts that double to shame. Try a quadruple rainbow. Curtis shared the photo on Twitter and her picture was quickly retweeted and shared all over the internet by thousands of people. Curtis, CEO of Nineteenth Amendment, said she caught the incredible sight near the commuter rail station in Glen Cove New York. 25 Natural Phenomena That Science Has Yet To Explain. It’s hard to believe, but there are things that our scientists have not been able to explain. 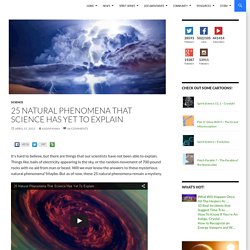 Things like, balls of electricity appearing in the sky, or the random movement of 700 pound rocks with no aid from man or beast. Will we ever know the answers to these mysterious natural phenomena? You Haven't Experienced Real Magic Until You've Stood Under These 11 Trees. Featured below are the most stunning and magical trees our planet has to offer. 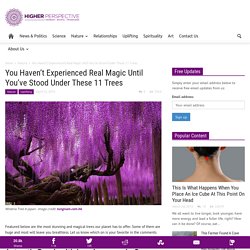 Some of them are huge and most will leave you breathless. Let us know which on is your favorite in the comments and be sure to share with your family and friends! Antarctic Beech with hanging moss in Oregon. 27 Trees That Don't Give A Fuck About You Or Anything That You Do.

7 Incredible Things that You’ll Never Believe Really Exist in Nature! Our world is filled to brim with mysterious, bizarre and still-to-be-explored places. 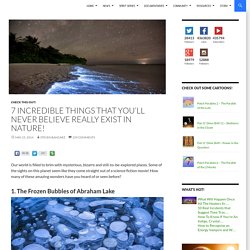 Some of the sights on this planet seem like they come straight out of a science fiction movie! How many of these amazing wonders have you heard of or seen before? 10 Breathtaking Places You Need to See to Believe! Our world is truly one of a kind. 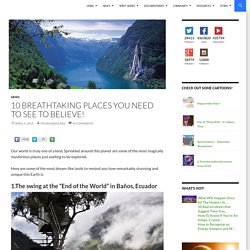 Sprinkled around this planet are some of the most magically mysterious places just waiting to be explored. Here are some of the most dream-like lands to remind you how remarkably stunning and unique this Earth is. 1.The swing at the “End of the World” in Baños, Ecuador 2.Mount Roraima in Venezuela. 20 Stunning Photos That Will Make You Want To Visit Norway.

‘Deyðir Varðar’, An Epic Music Video by Faroese Metal Band Hamferð Recorded L... He’s The World’s Best Water Photographer… And He’s Just Released These Haunti... At first glance, these photographs look like looming mountains, standing guard over a dark universe found in a Tolkien novel. But look again: These images are actually the ocean's waves, captured at their peak point of crash. It's almost spooky how powerful they feel. Photographer Ray Collins is the man behind these amazing images, which seem to capture the wave's most crucial moment, just before it crashes and sinks back into the water.

Collins bought his camera in 2007 with the hopes of shooting his surfer friends, but quickly found that he had a knack for photographing the water. 30 Abandoned Places that Look Truly Beautiful. Take a tour of the world’s apparently robust supply of statues, buildings, and temples–and witness the surprising grandeur of dilapidation. 1. Christ of the Abyss, San Fruttuoso, Italy. Lightening. Quite possibly die. Pluviophile. Pure magic. Tiny u & ur problems r. “This time-lapse shows flowers opening on a ‘Daydream’ hybrid echinopsis. Earth Looks Like A Living Creature In This Amazing NASA Video. We’ve all seen images of extreme weather from space.

But none of those could prepare us for this video released by NASA’s Scientific Visualization Studio. Using real data, this simulation’s volume-rendered clouds depict seven days in 2005 when a category-4 typhoon developed off the coast of China. 25 Bizarre Nature Photos Showing How Strange Earth Really Is. 22 Astonishing Places That Are Hard to Believe Really Exist. 22 Breathtaking Photos In Nature Guaranteed To Make You Feel Small, In A Good...