Three cheetahs spare tiny antelope's life... and play with him instead 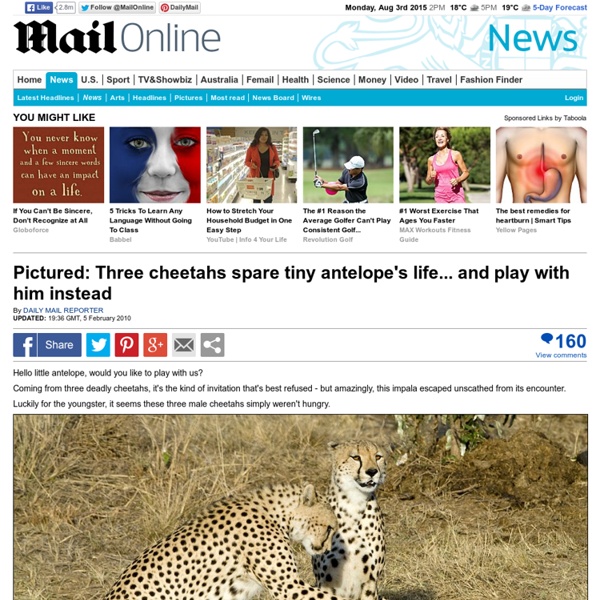 By Daily Mail Reporter Updated: 19:36 GMT, 5 February 2010 Hello little antelope, would you like to play with us? Coming from three deadly cheetahs, it's the kind of invitation that's best refused - but amazingly, this impala escaped unscathed from its encounter. Luckily for the youngster, it seems these three male cheetahs simply weren't hungry. No claws for alarm: Astonishingly, these cheetahs, whose instinct is to hunt for food, decide to play with this baby impala That's because unlike other big cats, the cheetah hunts in the daytime, either in the early morning or late afternoon. And that seems to be the secret to the antelope's survival, as it's likely it fell into the cheetahs' clutches when they were already full - and tired out - from an earlier hunt. Photographer Michel Denis-Huot, who captured these amazing pictures on safari in Kenya's Masai Mara in October last year, said he was astounded by what he saw. New found friends: The new-found friends part with a farewell lick Related:  Cheetahs

Cheetah Page E.J. Peiker, Nature Photographer Cheetah Home Page Back to Wildlife Gallery Index Masters of disguise: The gecko that resembles a leaf and nature's other camouflage experts By Wil Longbottom Updated: 07:29 GMT, 8 December 2011 Stare at these pictures for long enough and you might just spot some clever creatures playing the ultimate game of hide and seek. This Satanic Leaf-tailed Gecko is barely visible against the leaves in the Andasibe-Mantadia National Park, Madagascar. These amazing animals are true masters at blending effortlessly into their environment as a means of survival in the natural world. Blending in: This Satanic Leaf-tailed Gecko hides from predators in Andasibe-Mantadia National Park, Madagascar, or is it just a leaf? Nothing to see here: A Bat-faced Toad hides among dead leaves in Amacayacu National Park, Colombia Barking up the wrong tree: It's nearly impossible to pick out this Lichen Spider at the Erawan National Park in Thailand From frogs to fish and bugs to birds, this collection of images shows the animal kingdom's outstanding camouflage ability. Animals use two basic methods of concealment in a bid to hide from predators and catch prey.

Austrian Kidnap Victim Natascha Kampusch Revisits Cellar Seeing the cramped, windowless basement where Natascha Kampusch was locked up for 8½ years, it's almost impossible to believe that anyone could have survived the ordeal. Yet the Austrian kidnapping victim not only made it out of the dungeon where an engineer named Wolfgang Priklopil had imprisoned her as a child but also emerged a remarkably confident and self-assured young woman. In a powerful new documentary titled Natascha Kampusch: 3,096 Days' Imprisonment, which was broadcast on the German public television channel ARD on Monday night, Kampusch allowed cameras into the cellar where she had been locked up in the Vienna suburbs for the first time and revealed new harrowing details of her brutal captivity, which ended with her lucky escape in August 2006. "I have a stamp on my forehead which says victim of violence," Kampusch tells the TV crew who filmed the house that she now owns. "I will be ostracized for the rest of my life." The rest reads like a horror story.

Asiatic Cheetah The Asiatic cheetah ("cheetah" from Hindi चीता cītā, derived from Sanskrit word chitraka meaning "speckled") (Acinonyx jubatus venaticus) is now also known as the Iranian cheetah, as the world's last few are known to survive mostly in Iran. Although recently presumed to be extinct in India, it is also known as the Indian cheetah. During British colonial times in India it was famous by the name of hunting leopard,[3] a name derived from the ones that were kept in captivity in large numbers by the Indian royalty to use in hunting wild antelopes. The Asiatic cheetah separated from its African relative between 32,000 and 67,000 years ago.[8][9][10][11] Along with the Eurasian lynx and the Persian leopard, it is one of three remaining species of large cats in Iran today.[12] Anatomy and morphology[edit] Cheetah cubs with dog (India, 1897). During stress hyperthermia, there is high sympathetic nervous activity. Habitat and population estimates[edit] Prey[edit] Nawabs with their Asiatic cheetahs

Toddlers found wandering in West Jordan WEST JORDAN -- Two young children, ages 2 and 3, are in state custody for now as the Division of Child and Family Services investigates why the young girls were wandering outside Monday night in the cold. West Jordan police got a call around 9:30 Monday night from a concerned citizen who saw the girls walking down the street near the busy intersection of 7800 South and the Old Bingham Highway. Officer Dan Roberts says they responded and found the girls inside a nearby Artic Circle Restaurant, where the staff had given them some ice cream and other treats until their parents could be found. "They seemed to be content," said Roberts. He also said the 3-year-old told police her age and name, but not much else. Police say the girls appeared to be cold and lost, but on a mission for the indoor playground. Roberts said, "They weren't wearing winter clothing and they appeared to be disheveled." It wasn't until Tuesday morning that their mother realized they were even gone.

ZooBorns: Cheetah Last Monday my ZooBorns' co-founder, Chris Eastland, and I (Andrew Bleiman) made a very special trip to Dallas Zoo to meet their twin Cheetah cubs, Kamau and Winspear. We also met their canine companion, a black Lab puppy named, Amani. It's extraordinarily rare that we get to interact, let alone romp, with real-live zoo-borns. However these special cubs are being raised as education animals so socialization with humans, even goofy ZooBorns guys, is part of their regular day. Their puppy friend, Amani, is a calming influence who will also help with these efforts. The cubs were born at Smithsonian's Front Royal Conservation Biology Institute on July 8th. The feline duo put on quite a display. With wild Cheetah populations hovering somewhere around 10,000, the species is considered vulnerable to extinction. Institutions like Dallas Zoo serve an invaluable role in building empathy and awareness for wildlife conservation. Special thanks to the Dallas Zoo staff that made our visit possible.

This Common Food Ingredient Can Really Mess Up Your Metabolism By Dr. Mercola Continued from Part 1. What if you were to learn that every day, 25 percent of your calories came from a poison, disguised as a food? And what if you discovered that this chemical imposter was responsible for your insulin resistance and weight gain? And elevated blood pressure ... And elevated triglycerides and LDL ... And depletion of vitamins and minerals ... And even gout, heart disease and liver damage? What if you were to discover that this toxic substance had been dumped into your food in gradually increasing quantities for the last thirty years, with the full knowledge and blessings of the American Heart Association, the American Medical Association, the USDA and the FDA? Would you be angry? I wish I could tell you that this is just a dramatic plot from some fiction novel, but it's actually a shocking reality. We now know without a doubt that sugar in your food, in all its myriad of forms, is taking a devastating toll on the health of this nation. Big Gulp, Meet Big Belt Dr.

Cheetah will run again in India 29 July 2010Last updated at 07:49 The vast majority of the 10,000 cheetahs left in the world are in Africa The cheetah, eradicated in India by hunting nearly a century ago, will run again in the country, as three sites are earmarked for its reintroduction. The government has approved wildlife groups' recommendations of two sanctuaries in Madhya Pradesh and an area in Rajasthan as potential homes. The government will spend 30m rupees ($0.6m; £0.4m) to restore these sites before the animals are imported. The plan is to import the cats from Africa, Iran and the Middle East. Kuno Palpur and Nauradehi wildlife sanctuaries in the central Indian state of Madhya Pradesh and Shahgarh area in Jaisalmer, in the northern state of Rajasthan, have been selected as the sites to house the animals. Trophy hunters Environment and Forests Minister Jairam Ramesh said the reintroduction of the world's fastest land animal would "restore the grasslands" of India.

1/3rd of Women in US Military Raped According to NPR , The BBC recently reported on The Lonely Soldier: The Private War of Women Serving in Iraq by Helen Benedict. This book examines the extreme difficulties female soldiers have in serving abroad. Benedict interviewed several women in the military to get a deeper understanding of the issue, and some of their stories were real eye openers. Army specialist Chantelle Henneberry spoke of some of her experiences in Iraq, Another study concluded that 90% of all women serving are sexually harassed. An online discussion from a former soldier whose identity is being protected had this to say, How the military is dealing with this appears to demonstrate a pattern of sweeping it under the rug. This problem is not confined to the US military either. This crime eventually led to an amendment being added to the defense appropriations bill by Sen. The culture of sexual violence against women that is allowed to exist in both the US military and private contractors needs to come to an end.

Cheetah in the brush Haiti orphans at risk from traffickers -government, UNICEF | Reu