New plastic-eating bacteria could help save planet. The species fully breaks down one of the most common kinds of plastic called Polyethylene terephthalate (PET). 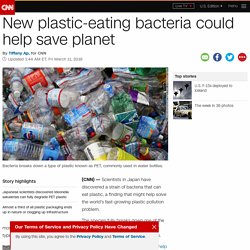 It's the type often used to package bottled drinks, cosmetics and household cleaners. The findings, published in the academic journal 'Science' on Friday, say that "Ideonella sakaiensis breaks down the plastic by using two enzymes to hydrolyze PET and a primary reaction intermediate, eventually yielding basic building blocks for growth. " This could be really good news for the environment. Almost a third of all plastic packaging escapes collection systems and ends up in nature or clogging up infrastructure, the World Economic Forum (WEF) warned. The WEF report, based on analysis of 20 studies and interviews with 180 experts, also said only 14% of plastic packaging is collected for recycling and that there will be more plastic than fish calculated by weight in the world's oceans by 2050.

Through an Artist’s Lens, Field Biology Takes the Stage. Always fascinated by how science and nature can explain the world to us, Finnish photographer Sanno Kannisto has been spending time in the woods her entire life. 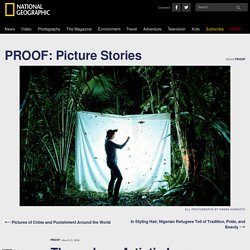 As a child she collected insects, frogs, mushrooms, and berries during summers and weekends spent in the countryside with her family. In the late 1990s she began exploring forests further from home—the rainforests of South America—with her camera and a small portable field studio. Since then Kannisto has been developing a style of image making that lives at the intersection of fine art and science and explores the complicated relationship between humans and nature. Over the years, Kannisto has photographed various species of snakes, bats, birds, frogs, mushrooms, and enigmatic tropical plants like the Aristolochia gorgona that produces 14 to 16 inch blossoms—all against the backdrop of human intervention.

In recent years Kannisto has left behind the tropics and has been photographing birds living on Finland’s Hanko Peninsula. Turning Van Gogh's The Night Cafe into virtual reality. Corals Are Dying on the Great Barrier Reef. By Brian Clark Howard Scientists have discovered an unprecedented die-off in the world's largest reef, the Great Barrier Reef, prompting the Australian government to issue its highest response level. 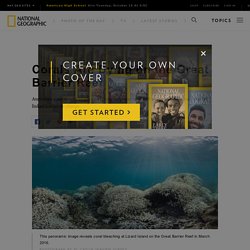 Diver surveys based off Cape York, Australia's northeastern tip, found up to 50 percent mortality in the reef from coral bleaching. Death among the organisms that build the reef's structure is most likely linked to rising temperatures in the ocean, the government announced. "The corals in the remote far north of the reef experienced extremely hot and still conditions this summer, and were effectively bathed in warm water for months, creating heat stress that they could no longer cope with," Russell Reichelt, the chairman of the Great Barrier Reef Marine Park Authority, said in a statement. Bleaching occurs when warm ocean water stresses corals to the point that they expel the tiny algae, known as zooxanthellae, that normally live inside their tissues. 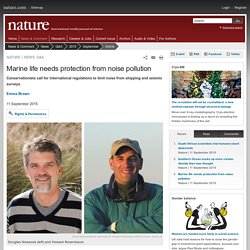 An international group of scientists is calling for stricter regulations to protect marine wildlife from noise pollution. In a study1 published last week in the journal Frontiers in Ecology and the Environment, researchers argue that action is needed to tackle excessive ocean noise from industrial activities such as shipping and seismic surveys, which use loud sound pulses fired from compressed air guns to explore the sea floor and find natural resources. Nature asked two authors of the study, conservation ecologists Douglas Nowacek at the Duke University Marine Laboratory in Beaufort, North Carolina, and Howard Rosenbaum at the Wildlife Conservation Society in New York City, why this is such an urgent problem.

This interview has been edited for length and clarity. Audio clip: a seismic survey How does noise pollution harm marine life? What do you suggest? DN: No. Names of Animals, Babies and Groups- EnchantedLearning.com. Animal Totems and Animal Symbolism. Animal totems play huge roles in our lives. 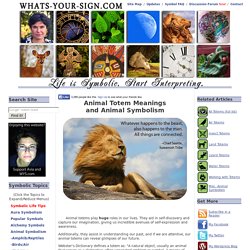 They aid in self-discovery and capture our imagination, giving us incredible avenues of self-expression and awareness. Additionally, they assist in understanding our past, and if we are attentive, our animal totems can reveal glimpses of our future. Webster's Dictionary defines a totem as: "A natural object, usually an animal that serves as a distinctive, often venerated emblem or symbol. A means of personal or spiritual identity. " Native American animal totems most commonly come to mind when discussing this topic. Since time immemorial, animals have served as harbingers of personality traits we, as humans, all aspire to achieve. Animals afford us visions of how our lives could be if we lived more simply and lived with purity of thought and emotion. By focusing on the attributes of our totems, we internalize these traits and thus begin to externalize the very character we absorb from our totems. Earth Animal Totems.