STALIN - the Rise of a dictator & Nature of his rule

Monty Phyton - Trotsky returns to Russia. Stalin & industrialisation. When Joseph Stalin came to power in the mid-1920s, the Soviet Union was a vast but under-developed country, mostly agricultural with little industry. 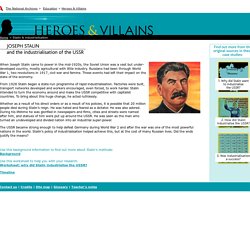 Russians had been through World War 1, two revolutions in 1917, civil war and famine. These events had left their impact on the state of the economy. From 1928 Stalin began a state-run programme of rapid industrialisation. Factories were built, transport networks developed and workers encouraged, even forced, to work harder. Stalin intended to turn the economy around and make the USSR competitive with capitalist countries.

Whether as a result of his direct orders or as a result of his policies, it is possible that 20 million people died during Stalin’s reign. National Security Archive/COLD WAR/Interviews. Stalin-rise to power-Using sweets to represent change over time. Any topic that focuses on changing fortunes over time could adopt this approach, which uses a large bag of sweets to represent a key theme being measured (for example, success, satisfaction or power). 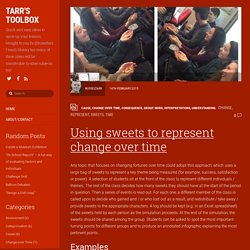 A selection of students sit at the front of the class to represent different individuals / themes. The rest of the class decides how many sweets they should have at the start of the period in question. Then a series of events is read out. For each one, a different member of the class is called upon to decide who gained and / or who lost out as a result, and redistribute / take away / provide sweets to the appropriate characters. A log should be kept (e.g. in an Excel spreadsheet) of the sweets held by each person as the simulation proceeds. Examples Rule of Mao – sweets represent ‘satisfaction’: Different people in the class take the role of different groups in China (e.g. woman, child, factory worker etc). Joseph Stalin Biography. Here is an account of the biography of Joseph Stalin. 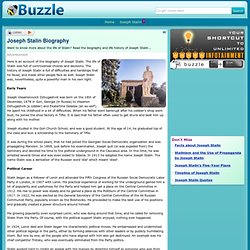 The life of Stalin was full of controversial choices and decisions. The history of Joseph Stalin is full of difficulties and hardships that he faced, and made other people face as well. Joseph Stalin was, nevertheless, quite a powerful man in his own right. Early Years Joseph Vissarionovich Dzhugashvili was born on the 18th of December, 1878 in Gori, Georgia (in Russia) to Vissarion Dzhugashvili (a cobbler) and Ekatertina Geladze (an ex-serf). Joseph studied in the Gori Church School, and was a good student. It was during the school years, that he had joined the Georgian Social-Democratic organization and was propagating Marxism. Political Career. Joseph Stalin's Five-Year Plans. There are occasions, as we know, when resources are abundant, but they are expended so incompetently that the advantage is nullified. ― Joseph Stalin After the Russian Civil War ended in October 1922, the USSR, under the leadership of Vladimir Lenin, suffered a major setback, especially on the economic front. 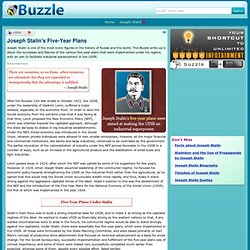 In order to save the Soviet economy from the extreme crisis that it was facing at that time, Lenin proposed the New Economic Policy (NEP), which was oriented towards the capitalist approach, although the state did keep its stakes in big industrial establishments. Under the NEP, mixed economy was introduced in the Soviet Union, wherein private individuals were allowed to own smaller enterprises; however, all the major financial and commercial institutions, like banks and large industries, continued to be controlled by the government.

Lenin passed away in 1924, after which the NEP was upheld by some of his supporters for few years. Joseph Stalin's Five-Year Plans. Stalinism and the Use of Propaganda by Joseph Stalin. Facts about Joseph Stalin. Did you know? 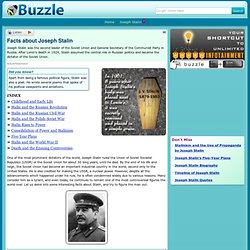 Apart from being a famous political figure, Stalin was also a poet. He wrote several poems that spoke of his political viewpoints and ambitions.

STALIN - The struggle over power. 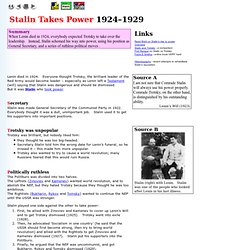 Everyone thought Trotsky, the brilliant leader of the Red Army would become leader – especially as Lenin left a Testament (will) saying that Stalin was dangerous and should be dismissed. But it was Stalin who took power. Secretary Stalin was made General Secretary of the Communist Party in 1922. Everybody thought it was a dull, unimportant job. Trotsky was unpopular Trotsky was brilliant, but nobody liked him: they thought he was too big-headed. Politically ruthless The Politburo was divided into two halves. The Leftists (Zinoviev and Kamenev) wanted world revolution, and to abolish the NEP, but they hated Trotsky because they thought he was too ambitious. The Rightists (Bukharin, Rykov and Tomsky) wanted to continue the NEP until the USSR was stronger. Stalin played one side against the other to take power: First, he allied with Zinoviev and Kamenev to cover up Lenin’s Will and to get Trotsky dismissed (1925).