Directions to Ammonite Falls - Tourism Nanaimo. BC Bat Species. There are 16 species of bats in BC (17 if you count the one record of a Big Free-tailed bat that washed up in New Westminster in 1938), but not all of them occur in all parts of the Province. 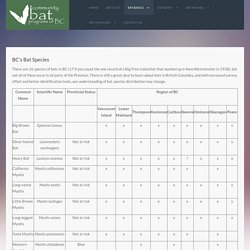 There is still a great deal to learn about bats in British Columbia, and with increased survey effort and better identification tools, our understanding of bat species distribution may change. The Pallid Bat (Threatened) and Spotted Bat (Threatened) have been listed under the federal Species at Risk Act. Little Brown Myotis and Northern Myotis has been recommended for listing as Endangered by the Committee on the Status of Endangered Wildlife in Canada (COSEWIC). Known roosting preferences of the bats of British Columbia (BC) in summer and winter (modified from Craig and Holroyd 2004). Some roost information is from research conducted outside BC Row colour signifies the species’ status in BC (Red= red-listed, Blue=blue-listed, white=not at risk). 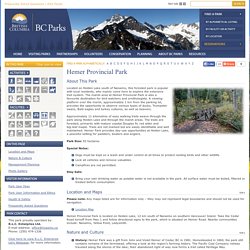 The marsh area at Hemer Provincial Park is also a favourite destination for bird watchers and ornithologists. A viewing platform over the marsh, approximately 1 km from the parking lot, provides the opportunity to observe various types of ducks, Trumpeter swans, Bald eagles and turkey vultures, as well as beavers. Approximately 11 kilometres of easy walking trails weave through the park along Holden Lake and through the marsh areas. Park Size: 93 hectares Special Notes: Dogs must be kept on a leash and under control at all times to protect nesting birds and other wildlife. Location and Maps Please note: Any maps listed are for information only – they may not represent legal boundaries and should not be used for navigation. Nature and Culture Management Planning Activities Available at this Park Canoeing. Nature on Mid-Vancouver Island. Nanaimo has vast tracts of green space – by the water, in the hills, and everywhere in between. 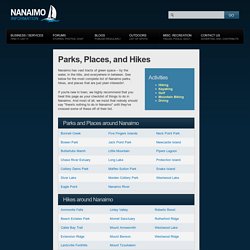 See below for the most complete list of Nanaimo parks, hikes, and places that are just plain interestin'. If you're new in town, we highly recommend that you treat this page as your checklist of things to do in Nanaimo. And most of all, we insist that nobody should say "there's nothing to do in Nanaimo" until they've crossed some of these off of their list. The beauty of this region stands out especially well from great heights. Hiking in Nanaimo is a rewarding way to spend a Sunday afternoon, or a Friday night! Nanaimo is a big strip between ocean and mountain, which means you're never far from a trailhead. Discuss your favourite trails, learn about more lookouts, and find hiking buddies on our Nanaimo Hiking Forum. B.C. Frogwatch Program – Environment – Province of British Columbia.

How to use the key: Dichotomous keys are very commonly used in biology – you may have seen one before. 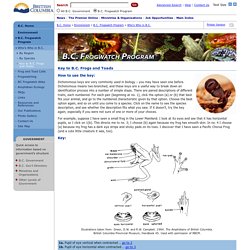 Dichotomous means two-branched, and these keys are a useful way to break down an identification process into a number of simple steps. There are paired descriptions of different traits, each numbered. For each pair (beginning at no. 1), click the option (a) or (b) that best fits your animal, and go to the numbered characteristic given by that option. Choose the best option again, and so on until you come to a species. For example, suppose I have seen a small frog in the Lower Mainland. Key: Illustrations taken from: Green, D.W. and R.W. 1a. 1b. 3b. School Malaise Trap Program. A Malaise trap is an effective collecting tool used for scientific research, particularly to carry out biodiversity inventories. 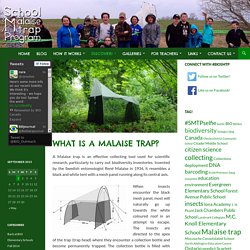 Invented by the Swedish entomologist René Malaise in 1934, it resembles a black and white tent with a mesh panel running along its central axis. When insects encounter the black mesh panel, most will naturally go up towards the white coloured roof in an attempt to escape. The insects are directed to the apex of the trap (trap head) where they encounter a collection bottle and become permanently trapped. The collection bottle is filled with ethanol to preserve the organisms and their DNA.

The trap can be deployed indefinitely, with only the bottle replaced periodically (usually once a week), making it a very low maintenance and low cost sampling technique. Morrell Sanctuary Trails. The Backyard Wildbird & Nature Store.