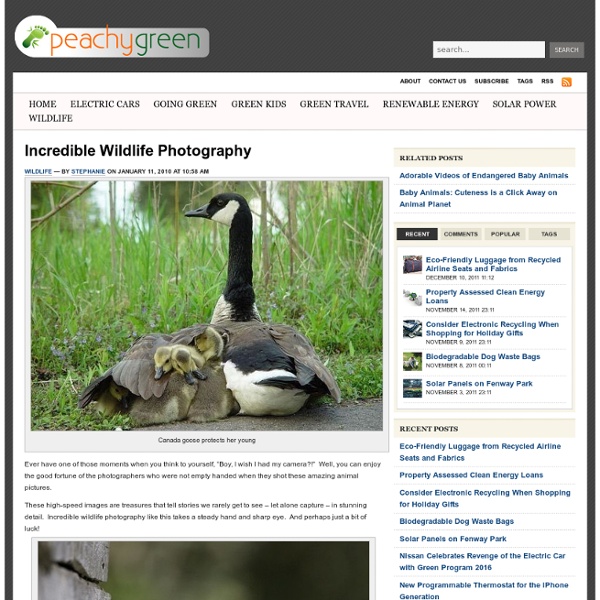 Wildlife — By Stephanie on January 11, 2010 at 10:58 am Canada goose protects her young Ever have one of those moments when you think to yourself, “Boy, I wish I had my camera?!” Well, you can enjoy the good fortune of the photographers who were not empty handed when they shot these amazing animal pictures. These high-speed images are treasures that tell stories we rarely get to see – let alone capture – in stunning detail. Incredible wildlife photography like this takes a steady hand and sharp eye. Bringing home the bugs.... If you oohed and ahhed over the first couple of pictures, you might have to prepare yourself for the next image…. open wide! All in one bite? The best wildlife photography is often expressed through the unexpected. Hey! What is more adorable than a curious monkey – particularly one that wonders what all the photography fuss is about? Among cute animal photographs, you’ve gotta agree… this one tops the charts! Ready for my close-up! Synchronized stretching Owls in a fir tree

10 Most Famous Trees in the World Famous trees come and go. L’Arbre du Ténéré was once considered the most isolated tree on Earth, a landmark on caravan routes in the Sahara, until it was knocked down by a drunk Libyan truck driver in 1973. This year in August, the famous Anne Frank tree in Amsterdam was blown down by high winds during a storm. Luckily, there are still many special trees out there. An overview of the most famous trees in the world. Stumble upon. Bracelet/cellphone Phone Fashion The trend in concept phones these days is turning retro, which is why we have the “Dial” reminisce the era of the round-dials on phones. The difference however lies in the present concept being touted as a fashion accessory that can be crafted in the metal of choice; giving you the luxury of being, chic, sporty, or uber-rich. A projected light beam in the inner circle impersonates the rotary dial, but to dial a number you need to simply touch it.

National Geographic Photo Contest 2011 National Geographic is currently holding its annual photo contest, with the deadline for submissions coming up on November 30. For the past nine weeks, the society has been gathering and presenting galleries of submissions, encouraging readers to vote for them as well. National Geographic was kind enough to let me choose among its entries from 2011 for display here on In Focus. Gathered below are 45 images from the three categories of People, Places, and Nature, with captions written by the individual photographers. [45 photos] Honey Hunters : Eric Valli Cart - 0 items High Himalaya Share 30 Best Room Pictures of the Week – May 04th to May 11th 1. I really love this pool 2.

Artist Transforms Stuffy Old Lace Into Fantastic Street Art (Photos) Photos: NeSpoon (via Behance) If you associate hoodie-concealed men sporting spray cans with street art, think again. Think crocheted bicycles, yarn bombing and random acts of planting. To be sure, traditional urban art is dominated by men. But the last decade has seen the rise of a number of talented female urban artists whose diverse subject matter ranges from candy-colored caricatures to abstract shapes and constellations -- and whose tools range from spray paint to more unconventional means of expression.

The Top 10 Relationship Words That Arent Translatable Into English Here are my top ten words, compiled from online collections, to describe love, desire and relationships that have no real English translation, but that capture subtle realities that even we English speakers have felt once or twice. As I came across these words I’d have the occasional epiphany: “Oh yeah! That’s what I was feeling...” Echoes of War Sergei Larenkov His photographs of the siege of Leningrad and St. Petersburg really got lots of name on internet and are famous too. so we present some really nice photographs by sergei, where past and present meet in Moscow, Berlin, Vienna, Prague.. 1. Vienna. 1945/2010.

People of the Rainbow Gathering Ever hear about Rainbow Gatherings? They're temporary community events typically held in outdoor settings; a place where people practice ideals like peace, love and harmony. The original Rainbow Gathering was in 1972 and was started as an alternative to mainstream popular culture. In the United States, the annual event is held on National Forest land from July 1 through 7. Most Extreme Landscapes on Earth Our globe is home to some truly breathtaking and extraordinary sights. Be it strangely-shaped rock formations, alien-looking sulfur springs or unique chocolate hills, the world is full of such beautiful phenomena that no words can describe it. Pictures may help... Sharply eroded buttes, pinnacles, and spires are the main features of Badlands National Park, South Dakota, USA.