Image of the the Day - Gallery 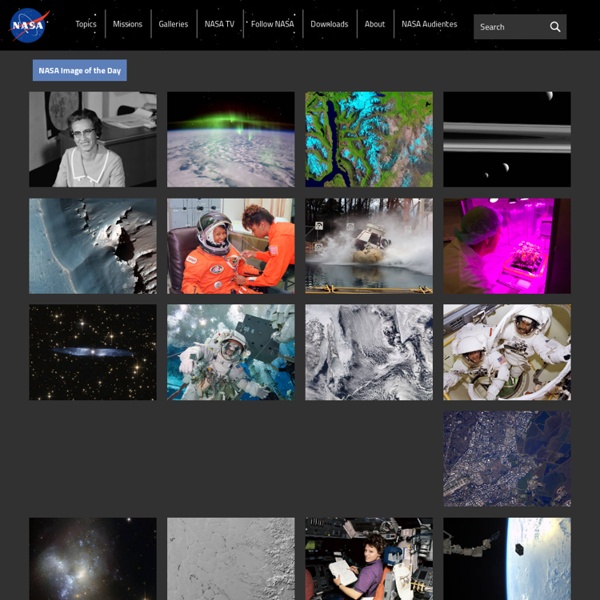 A Fuller Moon: High-Res Images Fill in Details about Lunar Topography: Scientific American Gallery A moon-orbiting spacecraft has compiled a nearly complete map of the lunar surface at its highest resolution to date. The moon is our closest celestial neighbor, but our knowledge of its topography is still fuzzy. That's changing quickly, thanks to the camera on board NASA's Lunar Reconnaissance Orbiter (LRO), which is being used to locate potential landing sites and lunar resources. LRO has dramatically sharpened our view of the moon's surface since it was launched in 2009. The newest maps achieve a resolution of 100 meters—each pixel represents roughly the area of two football fields placed side by side. The color-coded image above uses red and white to represent the highest elevations, and blue and purple represent the lowest.

Saturn's Moons Saturn's Moons The dozens of icy moons orbiting Saturn vary drastically in shape, size, surface age and origin. Some of these worlds have hard, rough surfaces, while others are porous bodies coated in a fine blanket of icy particles. National Geographic Photo Contest 2011 - Alan Taylor - In Focus National Geographic is currently holding its annual photo contest, with the deadline for submissions coming up on November 30. For the past nine weeks, the society has been gathering and presenting galleries of submissions, encouraging readers to vote for them as well. National Geographic was kind enough to let me choose among its entries from 2011 for display here on In Focus. Gathered below are 45 images from the three categories of People, Places, and Nature, with captions written by the individual photographers. [45 photos]

Beautiful Black and White Photos of Betty Brosmer - The Girl with the Impossible Waist Betty Brosmer was one of those models and was actually the highest paid model of the 1950s. Before she was 20, she had already won over 50 beauty contests. Throughout the decade she would appear on over 300 magazine covers. Here's a collection of 25 beautiful black and white portraits of of Betty Brosmer. (Photos © Betty Brosmer, via Messy Nessy Chic) The Top 50 'Pictures of the Day' for 2011 Every day at 5pm the Sifter posts the Picture of the Day. Below you will find a collection of the Sifter’s Top 50 from 2011. It’s hard to imagine the year is almost over, time seems to fly faster each successive year so it’s fun to take a moment and look back at the year that was.

The Telescope - Team Hubble Goddard Space Flight Center is home to the Space Telescope Operations Control Center for Hubble. Gathering images from space is more than a "point and shoot" proposition. The Hubble Space Telescope explores our universe 24 hours a day, 365 days a year. NASA's latest stunning images of sun (photos) Its mission is science, but since NASA's Solar Dynamics Observatory (SDO) was launched in 2010, it's been sending some just-plain stunning images of the sun back to Earth. The SDO spacecraft is the first mission launched for NASA's Living With a Star (LWS) Program, designed to understand the sun's influence on Earth. Using Atmospheric Imaging Assembly, EUV Variability Experiment, and a Helioseismic and Magnetic Imager, the semi-autonomous spacecraft gives scientists a nearly constant ability to watch our star. Check out some of the latest colorful multiwavelength images returned this week from the orbiting Solar Dynamics Observatory.

Weekend Feature: NASA-ESA Announce Europa Mission -Search for Life on Jupiter's Water Worlds With input from scientists around the world, American and European scientists working on the potential next new mission to the Jupiter system have announced their joint vision for the Europa Jupiter System Mission to explore "the emergence of habitable worlds around gas giants." The proposed Europa Jupiter System Mission would provide orbiters around two of Jupiter's moons: a NASA orbiter around Europa called the Jupiter Europa Orbiter, and an ESA orbiter around Ganymede called the Jupiter Ganymede Orbiter. "We've reached hands across the Atlantic to define a mission to Jupiter's water worlds," said Bob Pappalardo, the pre-project scientist for the proposed Jupiter Europa Orbiter, who is based at NASA's Jet Propulsion Laboratory. "The Europa Jupiter System Mission will create a leap in scientific knowledge about the moons of Jupiter and their potential to harbor life." Most scientists believe that the subEuropan seas are locked under tens of kilometers of ice.

Colossal Storm Rages Over Saturn’s Surface The largest storm seen on Saturn in more than 21 years has now been encircling the planet for a record-breaking 200 days.First appearing as a tiny blemish on Dec. 5, 2010, the storm is still going strong today, surpassing the ringed giant's previous longest tempest, which lasted 150 days back in 1903. NASA’s Cassini spacecraft, in orbit around Saturn, has given astronomers a front-seat view of this enormous maelstrom and provided valuable data.From its humble beginnings, the storm has grown to engulf the entire area between Saturn’s 30th and 51st north latitudes. From north to south, the tempest stretches about 9,000 miles — greater than diameter of the Earth — and covers two billion square miles, or eight times the surface area of our planet.Above:Northern ShowerThe storm marches through the planet's atmosphere in the top right of this false-color mosaic from Cassini.

NASA spacecraft due for rendezvous with comet Tempel 1 It's not exactly young love, but some might find it romantic. On Valentine's Day, an aging Lothario that has been flitting from beauty to beauty through the solar system will make his final stop, taking pictures of a battered dowager to send to the folks back home before disappearing forever. The Stardust spacecraft, which has already taken images of asteroid Annefrank and captured interstellar dust from comet Wild 2, on Monday night will swing by comet Tempel 1. There, it will take new pictures of the devastation wrought on the comet by NASA's 2005 Deep Impact mission.