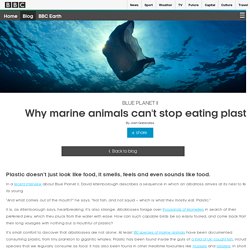 In a recent interview about Blue Planet II, David Attenborough describes a sequence in which an albatross arrives at its nest to feed its young. “And what comes out of the mouth?” He says. “Not fish, and not squid – which is what they mostly eat. Plastic.” It is, as Attenborough says, heartbreaking. It’s small comfort to discover that albatrosses are not alone. The prevalence of plastic consumption is partly a consequence of this sheer quantity. Like zooplankton, the tentacled, cylindrical creatures known as sea cucumbers don’t seem too fussy about what they eat as they crawl around the ocean beds, scooping sediment into their mouths to extract edible matter. For sea cucumbers, plastic particles may simply be larger and easier to grab with their feeding tentacles than more conventional food items, but in other species there are indications that plastic consumption is more than just a passive process. 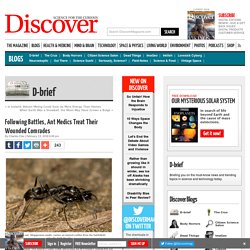 (Credit: Erik Frank) Ants that hunt termites can risk getting grievously injured in battle, but that doesn’t mean its the end of the line. In a newly published study, scientists observed ant medics caring for their wounded comrades, which may be the first scientifically documented example of such medical care in the animal kingdom outside humanity. The African ant Megaponera analis specializes in hunting termites.

After scouts of this ant species find termite feeding sites, the scouts lead columns of 200 to 600 fighters back to capture and kill termite prey. “The colony only has between 10 to 20 scouts at a time looking for food, and these scouts make all the important decisions about where to forage and how large the army should be that goes out,” said study lead author Erik Frank, a behavioral ecologist who carried out this research at the Julius Maximilian University of Würzburg in Germany. How to Grow and Care for African Violets. African violets are a beautiful indoor plant, so find out how to grow and care for African violets. 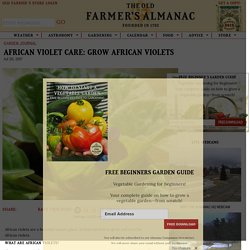 What Are African Violets? If you are in need of some flowering companions to get you through the cold days of winter, look for a plant that hails from the southern hemisphere, the African violet. African violets (Saintpaulia ionantha) are native to Tanzania and get their Latin name from a 19th century colonial official and amateur botanist, Baron Walter von Saint Paul, who was stationed in the east African country known then as Tanganyika.

He sent specimens of these wild violets home to his father in Germany and in a very short time African violet seeds and plants were available all over Europe. Though these dainty flowers may look fragile they are pretty tough plants and easy to grow on a warm sunny windowsill. Caring for African Violets These plants have few demands but will reward you with almost constant bloom if they are happy. Houseplants Clean Indoor Air Pollution Home Top Plants. NASA calls it Sick Building Syndrome. 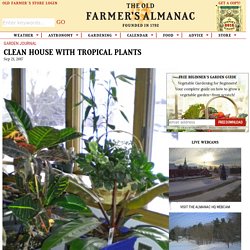 I know it as a stuffy house that needs a good airing, as my Mom put it. By the end of January, if it weren’t for the forest of houseplants in my home, I’d open the windows, despite the snow and freezing daytime temperatures. I did open them before I learned that tropical houseplants clean indoor air of pollution. Houseplants help rid the home of toxins such as benzene, formaldehyde, carbon dioxide and trichloroethylene, all chemicals that off-gas from man-made materials used to build and insulate a home.

They can cause leukemia, liver disease and a myriad of cancers. The NASA studies on indoor pollution done in 1989 recommends 15 to 18 plants in 6 to 8-inch- diameter containers to clean the air in an average 1,800 square foot house. Most of the plants that remove pollutants, scientists found, come from tropical forests where they only get light filtered through the branches of taller trees. Soil and roots also remove air-borne pollution.