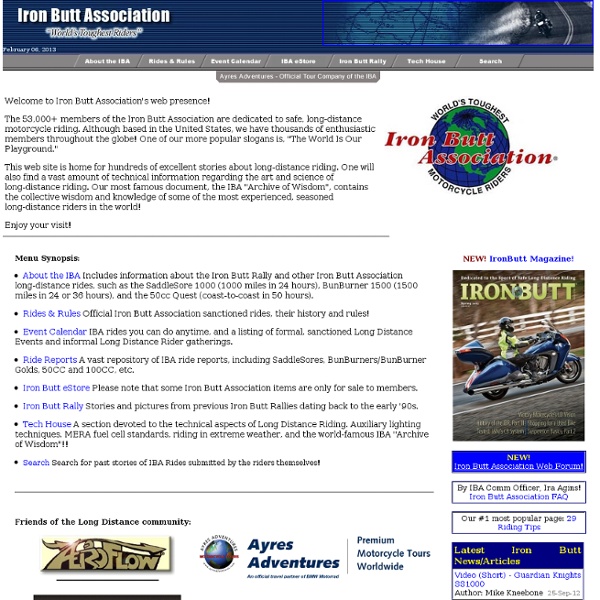 Welcome to Iron Butt Association's web presence! The 53,000+ members of the Iron Butt Association are dedicated to safe, long-distance motorcycle riding. Although based in the United States, we have thousands of enthusiastic members throughout the globe! One of our more popular slogans is, "The World Is Our Playground." This web site is home for hundreds of excellent stories about long-distance riding. One will also find a vast amount of technical information regarding the art and science of long-distance riding. Enjoy your visit!

Unexplained Phenomenon The FBI’s Reading Room contains many files of public interest and historical value. In compliance with the National Archives and Records Administration (NARA) requirements, some of these records are no longer in the physical possession of the FBI, eliminating the FBI’s capability to re-review and/or re-process this material. Please note, that the information found in these files may no longer reflect the current beliefs, positions, opinions, or policies currently held by the FBI. The image quality contained within this site is subject to the condition of the original documents and original scanning efforts. These older files may contain processing procedures that are not compliant with current FOIA processing standards. All recently scanned images posted to the Reading Room adhere to the NARA 300 DPI standard.

Family tree of the Greek gods Key: The essential Olympians' names are given in bold font. See also List of Greek mythological figures Notes 2014 KTM 1190 Adventure Greg DrevenstedtFebruary 25, 2013 Filed under Dual-Sport + Adventure Motorcycle Reviews, KTM Motorcycle Reviews, Road Tests, Top Stories Roaring out of the fourth tight, uphill corner, one of hundreds in our aggressive ascent from sea level to the lava fields surrounding 12,198-foot Mount Teide, two things dawned on me. One is that Tenerife, the largest of the 13 Canary Islands situated off the northwestern coast of Africa, is a beautiful but challenging place to ride. The other is that the all-new KTM 1190 Adventure is light-years beyond its predecessor.

20 obsolete English words that should make a comeback Photo: Katherine Hodgson If we all start using them, these words can be resurrected. DURING MY UNDERGRADUATE studies as a Linguistics major, one of the things that struck me most is the amazing fluidity of language. New words are created; older words go out of style. Words can change meaning over time, vowel sounds shift, consonants are lost or added and one word becomes another.

Finally a detailed How To: Swap clipons for handlebars - Suzuki SV650 Forum: SV650, SV1000, Gladius Forums Here it is took me several hours to type it and get it right, This is a highly detaled how to, for swaping your stock SV650S clip-on handlebars to SV650 Naked handlebars. All pictures are at the bottom of the second post. For anyone who hates having a sore back, wrists ect. this swap is for you, the 2 inches up and 1 inch back is worth every penny of the aproxmit $300 price tag.

Conspiracy Theories Conspiracy Theories Website for Those In The Know About Major Conspiracy TheoriesAnd a Strategy for Reaching Skeptics and Those Who Don't Know Many Conspiracy Theories Aren't Just Theories You may have noticed that this website consciously avoids using the term "conspiracy theory." Financial Suicide: A new life behind bars Howdy! I had started a "Trip Planning" thread, but kind of fell off the bandwagon with it, so hopefully I can keep this a bit more up to date. First, I'm Chris. 25, originally from Maine, now living in Texas, and never had a true adventure. I'm a rider through and through, and have ridden just about every type of motorcycle, or offroad vehicle since I was 9. I rode MX for a while, and eventually traveled and paid the bills as part of a Sportbike Freestyle team (stunt riding).

Plato - Philosopher Plato (/ˈpleɪtoʊ/; Greek: Πλάτων Plátōn "broad"pronounced [plá.tɔːn] in Classical Attic; 428/427 or 424/423 – 348/347 BCE) was a philosopher, as well as mathematician, in Classical Greece. He is considered an essential figure in the development of philosophy, especially the Western tradition, and he founded the Academy in Athens, the first institution of higher learning in the Western world. Along with his teacher Socrates and his most famous student, Aristotle, Plato laid the foundations of Western philosophy and science.[2] Alfred North Whitehead once noted: "the safest general characterization of the European philosophical tradition is that it consists of a series of footnotes to Plato." Plato's dialogues have been used to teach a range of subjects, including philosophy, logic, ethics, rhetoric, religion and mathematics. His lasting themes include Platonic love, the theory of forms, the five regimes, innate knowledge, among others.

No Fumar Español: South from San Diego Lets start off with the Ride Report trailer. Given the current economic doom and gloom with no light at the end of the tunnel, my employer was offering unpaid leaves for up to 2 years. Gotta stay lean and keep the earnings looking good for Wall Street dont ya know. To most of my co-workers, in light of the cut backs, things look bleak. However, to me, it looks like an opportunity. I thought it would be pretty cool to take a leave for a few months, load up my truck with a dirt bike and surfboards, and hang out in Baja.